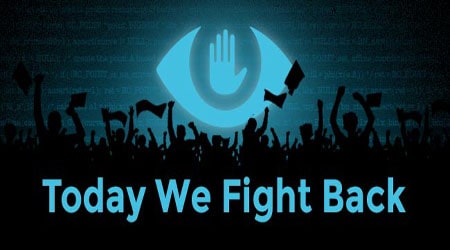 Mass surveillance of electronic communications is a vast, new, government intrusion on the privacy of innocent people worldwide. It is a violation of International human rights law. Without checks and balances, its use will continue to spread from country to country, corrupting democracies and empowering dictators.

That’s why, today, on February 11th, around the world, from Argentina to Uganda, from Colombia to the Philippines, the people of the Internet have united to fight back.

The Day We Fight Back’s main global action is to sign and promote the 13 Principles, a set of fundamental rules that, in clear language, tells lawmakers and governments how to apply existing human rights law to these new forms of surveillance. With the support of thousands of Net users, we’ll use your voice to demand that all governments comply with their obligation to protect privacy against unchecked surveillance.

But there’s more to today’s global action than the Principles. Hundreds of digital rights and privacy groups, thousands of individual Net users, in dozens of countries, have come together to protest surveillance by governments at home and abroad. Here’s just a sampling of the campaigns and events happening today:

In Argentina, the Asociación por los Derechos Civiles and Vía Libre Foundation is suing the Argentinian Congressional surveillance oversight commission for withholding basic information on surveillance practices in the country.

In Australia, a coalition of groups under the banner Citizens Not Suspects, is joining to demand a government investigation of the practices of the notorious “Five Eyes” countries — the nations, including Australia, which share intelligence with the NSA.

In Brazil, where the upcoming Marco Civil bill promises to encode human rights into the country’s Internet law, citizens are renewing their demands to include strong privacy protections.

In Canada, more than 45 major organizations, and tens of thousands of Canadians are calling their elected representatives to stop illegal spying by Communications Security Establishment Canada (CSEC), Canada’s spying agency.

Colombians have launched “Internet sin Chuzadas”, a campaign calling for the end of unchecked surveillance at home and abroad.

Poland’s Panoptykon Foundation is demanding answers from the Polish government and Barack Obama.

The Netherlands’ Bits of Freedom will call on Dutch citizens to join their campaign to stop mass surveillance: bespiedonsniet.nl (“Don’t Spy On Us”).

In Serbia, SHARE Foundation, one of the earliest supporters of the 13 Principles, is renewing their campaign against surveillance locally and internationally.

In Uganda, Unwanted Witness will be urging their local telephone companies to stop sharing private data with politicians.

And in the United Kingdom, a huge coalition of Britain’s privacy groups is launchingDontSpyOnUs.org.uk, to pressure the UK’s GCHQ to stop its global mass surveillance apparatus.

Where ever you live, you can join them: you can visit Necessary And Proportionate, the home of the 13 Principles, and add your name to our action, and find out what is happening in your own country. Write your own posts of opposition, and spread the word through the hashtag #stopspying.

Danny O’Brien in the international director for the Electronic Frontier Foundation and has been an activist for online free speech and privacy for over 15 years. In his home country of the UK, he fought against repressive anti-encryption law, and helped make the UK Parliament more transparent with FaxYourMP.  He was EFF’s activist from 2005 to 2007, and its international outreach coordinator from 2007-2009.