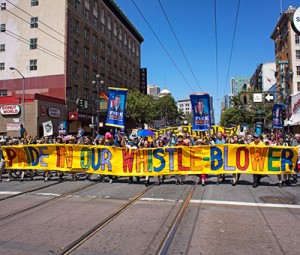 The critical moment in the political trial of the century was on February 28, 2013, when Bradley Manning stood and explained why he had risked his life to leak tens of thousands of official files. It was a statement of morality, conscience and truth: the very qualities that distinguish human beings. This was not deemed mainstream news in America, and were it not for Alexa O’Brien, an independent freelance journalist, Manning’s voice would have been silenced. Working through the night, she transcribed and released his every word. It is a rare, revealing document.

Describing the attack by an Apache helicopter crew who filmed civilians as they murdered and wounded them in Baghdad in 2007, Manning said: “The most alarming aspect of the video to me was the seemingly delightful bloodlust they appeared to have. They seemed not to value human life by referring to them as ‘dead bastards’ and congratulating each other on the ability to kill in large numbers. At one point in the video there is an individual on the ground attempting to crawl to safety [who] is seriously wounded … For me, this seems similar to a child torturing ants with a magnifying glass.”  He hoped “the public would be as alarmed as me” about a crime which, as his subsequent leaks revealed, was not an aberration.

Bradley Manning is a principled whistleblower and truth-teller who has been vilified and tortured – and Amnesty International needs to explain to the world why it has not adopted him as a prisoner of conscience; or is Amnesty, unlike Manning, intimidated by criminal power?

“It is a funeral here at Fort Meade,” Alexa O’Brien told me. “The US government wants to bury Manning alive.  He is a genuinely earnest young man with not an ounce of mendacity. The mainstream media finally came on the day of the verdict. They showed up for a gladiator match – to watch the gauntlet go down, thumbs pointed down.”

The criminal nature of the American military is beyond dispute.  The decades of lawless bombing, the use of poisonous weapons on civilian populations, the renditions and the torture at Abu Graib, Guantanamo and elsewhere, are all documented. As a young war reporter in Indochina, it dawned on me that America exported its homicidal neuroses and called it war, even a noble cause. Like the Apache attack, the infamous 1968 massacre at My Lai was not untypical. In the same province, Quang Ngai, I gathered evidence of widespread slaughter: thousands of men, women and children murdered arbitrarily and anonymously in “free fire zones.”

In Iraq, I filmed a shepherd whose brother and his entire family had been cut down by an American plane, in the open. This was sport. In Afghanistan, I filmed to a woman whose dirt-walled home, and family, had been obliterated by a 500-pound bomb. There was no “enemy.” My film cans burst with such evidence.

In 2010, Private Manning did his duty to the rest of humanity and supplied proof from within the murder machine. This is his triumph, and his show trial merely expresses corrupt power’s abiding fear of people learning the truth. It also illuminates the parasitic industry around truth-tellers. Manning’s character has been dissected and abused by those who never knew him yet claim to support him.

The hyped film, We Steal Secrets: the Story of WikiLeaks, mutates a heroic young soldier into an “alienated … lonely … very needy” psychiatric case with an “identity crisis” because “he was in the wrong body and wanted to become a woman.” So spoke Alex Gibney, the director, whose prurient psycho-babble found willing ears across a media too compliant or lazy or stupid to challenge the hype and comprehend that the shadows falling across whistleblowers may reach even them. From its dishonest title, Gibney’s film performed a dutiful hatchet job on Manning, Julian Assange and WikiLeaks. The message was familiar – serious dissenters are freaks. Alexa O’Brien’s meticulous record of Manning’s moral and political courage demolishes this smear.

In the Gibney film, US politicians and the chairman of the Joint Chiefs of Staff are lined up to repeat, unchallenged, that, in publishing Manning’s leaks, WikiLeaks and Assange placed the lives of informants at risk and had “blood on his hands.” On August 1, the Guardian reported: “No record of deaths caused by WikiLeaks revelations, court told.” The Pentagon general who led a 10-month investigation into the worldwide impact of the leaks reported that not a single death could be attributed to the disclosures.

Yet in the film, the journalist Nick Davies describes a heartless Assange who had no “harm minimization plan.” I asked the filmmaker Mark Davis about this. A respected broadcaster for SBS Australia, Davis was an eyewitness, accompanying Assange during much of the preparation of the leaked files for publication in the Guardian and theNew York Times. His footage appears in the Gibney film. He told me, “Assange was the only one who worked day and night extracting 10,000 names of people who could be targeted by the revelations in the logs.”

While Manning faces life in prison, Gibney is said to be planning a Hollywood movie. A “biopic” of Assange is on the way, along with a Hollywood version of David Leigh’s and Luke Harding’s book of scuttlebutt on the “fall” of WikiLeaks. Profiting from the boldness, cleverness and suffering of those who refuse to be co-opted and tamed, they all will end up in history’s waste bin. For the inspiration of future truth-tellers belongs to Bradley Manning, Julian Assange, Edward Snowden and the remarkable young people of WikiLeaks, whose achievements are unparalleled. Snowden’s rescue is largely a WikiLeaks triumph: a thriller too good for Hollywood because its heroes are real.

John Pilger, Australian-born, London-based journalist, filmmaker and author. For his foreign and war reporting, ranging from Vietnam and Cambodia to the Middle East, he has twice won Britain’s highest award for journalism. For his documentary films, he won a British Academy Award and an American Emmy. In 2009, he was awarded Australia’s human rights prize, the Sydney Peace Prize. His most recent film is The War on Democracy. His new film, Utopia, will be previewed at the National Film Theatre, London, in the autumn.