The consequences of the U.S. war on terrorism in Africa 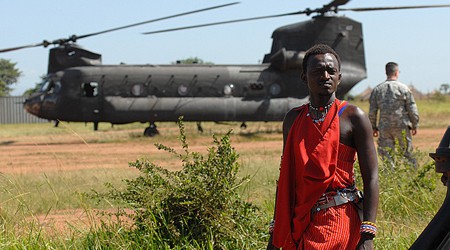 On May 5, President Barack Obama hosted his Djiboutian counterpart, Ismail Omar Guelleh, at the White House. The two leaders signed a 20-year lease agreement for the Djibouti-based Camp Lemonnier, the biggest U.S. military base in Africa. Covering 500 acres, the installation is a crucial launching site for U.S. military operations against militant groups in the Horn of Africa and Yemen. The U.S. agreed to pay an annual fee of $70 million for the site, which now hosts more than 4,000 U.S. military personnel and civilians.

The base is a key part of Pentagon’s plans “to maximize the impact of a relatively small U.S. presence in Africa,” according to the 2014 Quadrennial Defense Review, a congressional panel that conducts assessments of U.S. defense strategy and priorities. All African countries except Eritrea receive some form of U.S. military assistance, according to data from the U.S. State Department. Most of this assistance is channeled through the department’s International Military Education and Training program, which facilitates professional relationships with African militaries. The Obama administration is looking to invest in “new, effective and efficient small footprint locations and developing innovative approaches to using host nation facilities or allied joint-basing” as part of its focus on security in Africa. A handful of African nations — including Ethiopia, South Sudan, Niger, Uganda, Kenya, Mauritania, Mali, the Seychelles and Burkina Faso — already host U.S. drone sites, shared bases and military surveillance facilities. Also, the U.S. maintains a secretive program training counterterrorism commandos in states that straddle the vast Sahara, whose ungoverned spaces provide a rear base for terrorist groups.

The Pentagon’s military footprint in Africa is indeed small compared with other parts of the world. For example, in 2012, U.S. military aid and arms sales to Africa accounted for a mere 4.25 percent of the global total. (The Near East received 67.7 percent.) These military outlays were just 5.5 percent of the $7.8 billion the U.S. allocated for foreign assistance in the African region, with health care ($5.6 billion) getting the lion’s share. Regardless of the size of the U.S. military footprint in Africa, its expansion of has serious implications for the continent’s security, the consolidation of democracy and the professionalization of its militaries as well as for respect for human rights across the region. Unfortunately, these concerns do not rank high on the Pentagon’s agenda.

The U.S. geographic command responsible for Africa is overseen by U.S. Africa Command (AFRICOM), based in Stuttgart, Germany. In 2009, two years after it was created, AFRICOM had an operating budget of about $400 million and more than 1,000 staffers. Unlike other similar U.S. operations, it is fully integrated with other U.S. agencies in Africa — including USAID and the State, Commerce and Treasury departments. This arrangement informs AFRICOM’s focus on a 3-D approach — defense, diplomacy and development — in the region.

At the core of the U.S. military engagement in Africa is the war against Al-Qaeda affiliates: Somalia’s Al-Shabaab and Al-Qaeda in the Maghreb (AQIM), as well as armed groups such as Uganda’s Lord’s Resistance Army (LRA) and Nigeria’s Boko Haram. To help conduct AFRICOM’s counterterrorism operations in the region, the U.S. has recruited a motley crew of African allies, including those that face direct threats from these groups. Kenya, Uganda, Burundi, Djibouti and Ethiopia are key partners in the war against Al-Shabaab, and Niger and Burkina Faso have emerged as critical hosts of U.S. operations against AQIM. But Washington’s strategic calculations and the interests of African leaders who sign on to these arrangements do not always converge with the interests of the majority of African people.

In order to preserve ongoing cooperation arrangements, the U.S. has consistently looked the other way in the face of gross human rights violations and anti-democratic tendencies of its partner states. Djibouti’s Guelleh, now in power for 15 years, scrapped term limits to pave the way for a third term in 2010, leading to the opposition’s boycott of parliament. In Djibouti, not unlike in other allied countries, the 2013 U.S. State Department annual country reports revealed cases of torture, arbitrary arrest and restriction of freedom of association. Ethiopia and Uganda, the two leading U.S. allies in sub-Saharan Africa, are serial human rights offenders. Ethiopia is the second leading jailer of journalists in Africa (after only Eritrea). In a renewed crackdown on freedom of expression, authorities in Ethiopiajailed nine additional journalists and bloggers last month only days before Secretary of State John Kerry’s trip to Addis Ababa. The country has been in the news for the recent killings of unarmed student protesters in the Oromia region. Uganda gained international infamy earlier this year by pioneering a draconian anti-gay law. In both countries, opposition parties operate under severe restriction, with Ethiopia having only one opposition member in its 547-person legislature.

The United States has been implicated in maintaining a secretive detention program in concert with the governments of Kenya, Uganda, Ethiopia and Somalia. A 2008 Human Rights Watch report, “Horn of Africa Renditions,” detailed a little-known unlawful detention policy, akin to the Central Intelligence Agency’s extraordinary rendition program. According to journalist Jason Leopold, Mohammed al-Asad, a Yemeni citizen arrested in Tanzania in 2003, claims thatU.S. forces tortured him at a black site in Djibouti. In Kenya the government has recently been accused of summarily executing radical Muslim clerics suspected of having links to Al-Shabaab. (The government denies the charge.) The war on terrorism has provided opportunities for some African leaders to enact sweeping anti-terrorism laws with the aim of silencing dissent. In Ethiopia alone, more than 35 journalists and opposition leaders have been convicted under that country’s anti-terrorism proclamation.

In addition to turning a blind eye to human rights abuses, the U.S.’s inherent bias toward military approaches to security threats in Africa limits the options available to African governments facing domestic security challenges. In many cases, negotiations with entities designated as terrorist groups contravene U.S. anti-terrorism laws that forbid any kind of exchange that might be beneficial to terrorist groups. After initial attempts to negotiate with the LRA, Uganda has recently embarked on a purely militaristic solution backed by U.S. military hardware and advisers. Further afield, the United States’ designation of Boko Haram as a foreign terrorist group and the promise of military assistance after the kidnapping of nearly 300 schoolgirls may unreasonably limit Nigeria’s options for political and other kinds of negotiated settlements. Because of their exposure to terrorist attacks (as witnessed in Djibouti on May 25) and their economic consequences, African states allied with the U.S. must strive to maintain enough wriggle room to pursue localized solutions to their security challenges.

U.S. military operations and engagements with African militaries also risk compromising the professionalization of African militaries. Uganda offers an instructive case. Kampala has been a key U.S. military ally since the Iraq War and is the leading partner in the African Union mission in Somalia. Washington maintains an important facility at the Entebbe airport and is assisting in the hunt for the LRA leader Joseph Kony. But over the same period, Ugandan President Yoweri Museveni, in office since 1986, has personalized the military. Ugandan journalist Andrew Mwenda argues that Museveni has used a “strategy of fragmentation” to create factions within the military in an attempt to limit coherence in the institution. The president’s son, Muhoozi Kainerugaba, is the commander of the special forces, a group whose duties include protecting the president and the country’s oil resources. More generally, unless carefully mitigated, Washington’s unchecked war on terrorism in the region will result in overgrown military units outside normal chains of command, creating problems for effective civilian control in the long run.

The challenge for both AFRICOM and its African partners is to devise strategies that will ensure that security objectives are not pursued at the expense of democracy, military professionalization and respect for human rights. Furthermore, in the spirit of its 3-D approach, AFRICOM must be open to domestic solutions to Africa’s security needs. Such domestic solutions have the advantage of localizing the specific conflicts that create insecurity in the first place. Ultimately, African leaders must be careful not to let their countries be turned into mere venues for an international conflict between the U.S. and transnational terrorist groups.

Ken Opalo is a Ph.D. candidate in political science at Stanford University. His dissertation research is on institutional change, focusing on legislative development in Africa.