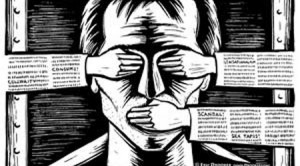 The public needs to awaken to the threat to its own freedoms from the Obama crackdown on leaks and, by extension, journalism and free speech itself.

The American journalism trade is breathing a collective – but premature and, in many cases, grossly hypocritical – sigh of relief today. A military judge has found Bradley Manning guilty of many crimes, but “aiding the enemy” isn’t one of them.

Had the judge found Manning guilty of aiding the enemy, she would have set a terrible precedent. For the first time, an American court – albeit a military court – would have said it was a potentially capital crime simply to give information to a news organization, because in the internet era an enemy would ultimately have been able to read what was leaked.

However, if journalism dodged one figurative bullet, it faces many more in this era. The ever-more-essential field of national security journalism was already endangered. It remains so. The Obama administration’s war on leaks and, by extension, the work of investigative reporters who dare to challenge the most secretive government in our lifetimes, has been unrelenting.

The Manning verdict had plenty of bad news for the press. By finding Manning guilty of five counts of espionage, the judge endorsed the government’s other radical theories, and left the journalism organization that initially passed along the leaks to the public, Wikileaks, no less vulnerable than it had been before the case started. Anyone who thinks Julian Assange isn’t still a target of the US Government hasn’t been paying attention; if the US can pry him loose from Ecuador’s embassy in London and extradite him, you can be certain that he’ll face charges, too, and the Manning verdict will be vital to that case.

The military tried its best to make life difficult for journalists covering the Manning trial, but activists – not traditional journalists – were the ones who fought restrictions most successfully. Transcripts weren’t provided by the government, for example. Only when the Freedom of the Press Foundation crowd-sourced a court stenographer did the public get a record, however flawed, of what was happening.

That public included most of the press, sad to say. Only a few American news organizations (one is the Guardian’s US edition) bothered to staff the Manning trial in any serious way. Independent journalists did most of the work, and did it as well as it could be done under the circumstances.

The overwhelmingly torpid coverage of this trial by traditional media has been yet another scandal for the legacy press, which still can’t seem to wrap its collective brain around the importance of the case, and especially its wider context. National security journalist Jeremy Scahill summed it up after the verdict when he told Democracy Now: “We’re in a moment when journalism is being criminalized.”

For those who want to tell the public what the government is doing with our money and in our name, there are new imperatives. Governmental secrecy, surveillance and the systematic silencing of whistleblowers require updated methods for journalists and journalism organizations of all kinds. Americans pursuing this craft have to understand the risks and find countermeasures.

That is not enough. The public needs to awaken to the threat to its own freedoms from the Obama crackdown on leaks and, by extension, journalism and free speech itself. We are, more and more, a society where unaccountable people can commit unspeakable acts with impunity. They are creating a surveillance state that makes not just dissent, but knowledge itself, more and more dangerous. What we know about this is entirely due to leakers and their outlets. Ignorance is only bliss for the unaccountable.

Dan Gillmor is director of the Knight centre for digital media entrepreneurship at Arizona State University’s Walter Cronkite school of journalism and mass communication. His most recent book is Mediactive (2010), also a blog of the same name, about how people can be empowered as new media users. Follow Dan on Twitter @dangillmor