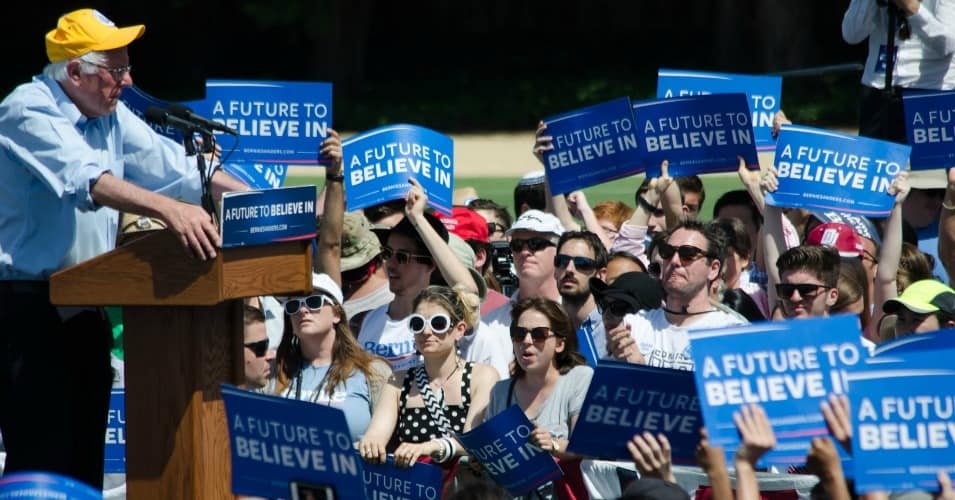 On the surface, the battle between Hillary Clinton and Bernie Sanders looks like a deep rift, one that threatens to splinter the Democratic Party. But viewed in the sweep of history, it is evidence of something far more positive for the party’s base and beyond: not a rift but a shift—the first tremors of a profound ideological realignment from which a transformative new politics could emerge.

Many of Bernie’s closest advisers—and perhaps even Bernie himself—never imagined the campaign would do so well. And yet it did. The U.S. left—and not some pale imitation of it—actually tasted electoral victory, in state after state after state. The campaign came so close to winning that many of us allowed ourselves to imagine, if only for a few, furtive moments, what the world would look like with a President Sanders.

Even writing those words seems crazy. After all, the working assumption for decades has been that genuinely redistributive policies are so unpopular in the U.S. that they could only be smuggled past the American public if they were wrapped in some sort of centrist disguise. “Fee and dividend” instead of a carbon tax. “Health care reform” instead of universal public health care.

Only now it turns out that left ideas are popular just as they are, utterly unadorned. Reallypopular—and in the most pro-capitalist country in the world.

It’s not just that Sanders has won 20-plus contests, all while never disavowing his democratic socialism. It’s also that, to keep Sanders from hijacking the nomination, Clinton has been forced to pivot sharply to the left and disavow her own history as a market-friendly centrist. Even Donald Trump threw out the economic playbook entrenched since Reagan—coming out against corporate-friendly trade deals, vowing to protect what’s left of the social safety net, and railing against the influence of money in politics.

Taken together, the evidence is clear: The left just won. Forget the nomination—I mean the argument. Clinton, and the 40-year ideological campaign she represents, has lost the battle of ideas. The spell of neoliberalism has been broken, crushed under the weight of lived experience and a mountain of data.

What for decades was unsayable is now being said out loud—free college tuition, double the minimum wage, 100 percent renewable energy. And the crowds are cheering. With so much encouragement, who knows what’s next? Reparations for slavery and colonialism? A guaranteed annual income? Democratic worker co-ops as the centerpiece of a green jobs program? Why not? The intellectual fencing that has constrained the left’s imagination for so long is lying twisted on the ground.

This broad appetite for systemic change did not begin with Sanders. During the Obama years, a wave of radical new social movements emerged, from Occupy Wall Street and the Fight for $15 to #NoKXL and Black Lives Matter. Sanders harnessed much of this energy—but by no means all of it. His weaknesses reaching certain segments of black and Latino voters in the Democratic base are well known. And for some activists, Sanders has always felt too much like the past to get overly excited about.

Looking beyond this election cycle, this is actually good news. If Sanders could come this far, imagine what a left candidate who was unburdened by his weaknesses could do. A political coalition that started from the premise that economic inequality and climate destabilization are inextricable from systems of racial and gender hierarchy could well build a significantly larger tent than the Sanders campaign managed to erect.

And if that movement has a bold plan for humanizing and democratizing new technology networks and global systems of trade, then it will feel less like a blast from the past, and more like a path to an exciting, never-before-attempted future. Whether coming after one term of Hillary Clinton in 2020, or one term of Donald Trump, that combination—deeply diverse and insistently forward-looking—could well prove unbeatable.

Naomi Klein is an award-winning journalist, author, and syndicated columnist. Her new book, This Changes Everything: Capitalism vs the Climate (Simon & Schuster, 2014), has just been published. Her previous books include the international best-sellers,  The Shock Doctrine: The Rise of Disaster Capitalism and No Logo: Taking Aim at the Brand Bullies.   To read all her writing visit www.naomiklein.org. Follow her on Twitter:@NaomiAKlein.