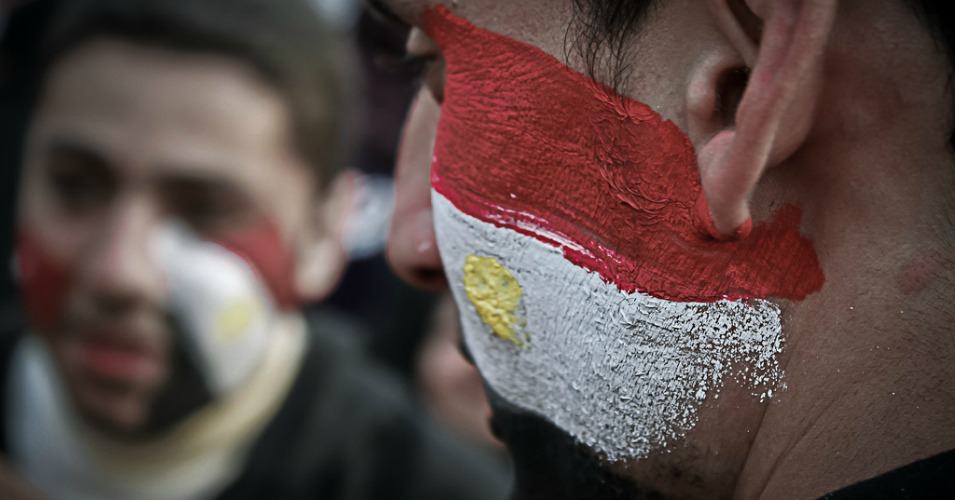 Egyptians with their faces painted participating in the revolutionary protests that took down Hosni Mubarak in 2011. (Photo: Ahmad Hammoud/flickr/cc)

Look across North Africa, and at three adjacent countries in particular, and one can see the best and some of the worst of what the Arab Spring has produced so far. Comparing the experiences of the three countries is a lesson in what helps move a country toward something resembling stable democracy, and what moves it in the opposite direction. History has determined some of the factors at play, but others are more amenable to being shaped by policy.

If there is any one bright spot after nearly four years of flux and upheaval in much of the Middle East, it is the place where the Arab Spring began: Tunisia. That country certainly has greater political liberty now than it did under the previous regime of President Zine El Abidine Ben Ali. The road from Ben Ali’s ouster has not been smooth, but it has been pointing in a favorable direction.

This Sunday Tunisians voted freely for the second time since the revolution to elect a parliament. The election was scheduled after increased popular dissatisfaction with the performance, especially economic performance, of a coalition government led by the Ennahda Movement generated strikes and political gridlock. Ennahda did the responsible thing by stepping down and handing the reins of government to a caretaker cabinet.

Next door to Tunisia, Libya is in what can only be described as an awful mess. It may not be the very worst post-Arab Spring place in the Middle East — probably Syria deserves that distinction — but it comes close. Combat between dueling militias is far more prominent than anything that resembles a democratic political process.

Moving over one more country to the east brings one to Egypt, which is not as chaotic as Libya but has moved in a direction that may turn out to be at least as bad — for Egypt itself, and because of its greater size and weight in the region, for the Middle East. The regime of President Abdel Fattah el-Sisi resembles the pre-Arab-Spring regime of Hosni Mubarak in that is led by a figure who rose to power through the military and for whom the military is still the critical source of support, while governing with the forms of a representative republic and even with some genuine popular support.

But Sisi has promptly become more harshly authoritarian than Mubarak ever was, and in that respect political change in Egypt over the past four years represents a step backward. Sisi’s regime has been mercilesslyextinguishing all dissent and independent civil society. All political activity on university campuses is effectively banned.

One respect in which the repression is likely to spell an even worse future for Egypt is that the absence of peaceful channels for expressing opposition and pursuing political objectives means that much more resort to violent channels. Sisi’s Egypt already has become plagued by heightened terrorism, with a couple of attacks last week being recent and especially deadly demonstrations of this.

Some of the reasons for the widely varying results of upheaval in the Maghreb can be found in conditions that existed before the upheaval began. Tunisia, for example, has had the advantage of a relatively small and homogeneous population that has been a bit closer than the others to Europe not only geographically but probably in the mental habits of its citizens.

Libya had the disadvantage of four decades of Muammar Gaddafi’s rule, after which there was hardly anything left in the way of independent institutions, and thus almost nothing on which to build once the regime was gone. Egypt has had a military that is used to getting its way, including deciding when presidents ought to come and go.

The varying results demonstrate a couple of other principles, however, that are more a matter of policy discretion. One is the principle that if sentiments are not permitted to be expressed in a normal and peaceful way, they will find abnormal and violent outlets. This principle is especially illustrated by the handling of the main Islamist movements in each country.

In Tunisia that movement is Ennahda. It has been treated as a responsible and legitimate political actor in a democratic process, and it has behaved as a responsible and legitimate actor. Its relinquishing of power to open the way for fresh elections, after Ennahda had lost too much public confidence to enable it to govern effectively, is an emphatic rebuttal to the “one man, one vote, one time” label that has routinely been placed on Islamist parties.

Here a useful contrast is with the next country to the west — Algeria — where, more than 20 years ago, a military coup that preempted a likely victory in a free election by the principal Islamist party there led to a ghastly civil war that may have killed upwards of 100,000 people.

Algeria has been conspicuously absent from the Arab Spring, and probably a major reason is the fear of Algerians that any upsetting of the status quo would mean a return to such butchery. And so Algeria muddles along under the undemocratic influence of the mostly military power structure known as le pouvoir.

The Sisi regime has treated the largest Islamist group in Egypt, the Muslim Brotherhood, far differently than Ennadha has been treated in Tunisia. The treatment of the Brotherhood is also much different from how it was handled under Mubarak, when, although officially outlawed, it was permitted to participate politically in various indirect ways.

Another principle being illustrated is that getting rid of a disliked and distrusted leader is not necessarily a step toward democracy and stability. The United States and its European allies should have learned that lesson by now regarding their role in ousting Gaddafi.

Those Egyptians who were not favorably inclined toward the Muslim Brotherhood and who smiled upon the military’s coup that ousted the elected president, Mohamed Morsi, may also now be having some buyer’s remorse. If anyone in the Maghreb is apt to demonstrate what “one man, one vote, one time” means, it probably will be Sisi.

Paul R. Pillar, in his 28 years at the Central Intelligence Agency, rose to be one of the agency’s top analysts. He is now a visiting professor at Georgetown University for security studies.