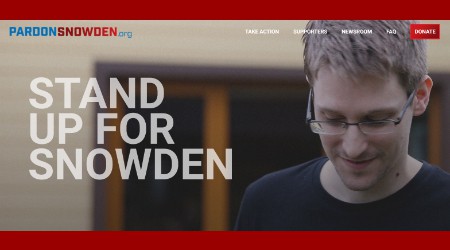 by Adi Robertson
The Verge

Several human rights organizations will soon launch a campaign urging President Obama to pardon NSA whistleblower Edward Snowden, coinciding with the premiere of the Oliver Stone biopic based on his life. Motherboard reports that the American Civil Liberties Union, Human Rights Watch, Amnesty International, and other groups will formally announce the news on Wednesday, although a largely password-protected website is already online. [Update: pardonsnowden.org is now fully accessible and accepting signatures] The project will involve a “mass signature campaign around the world,” as well as an effort to get “prominent individuals and organizations” to support the cause.

But this summer, Snowden’s ACLU counsel Ben Wizner said he would be making a strong case for a pardon in the months before Obama leaves office. Now, he hopes that Snowden’s sympathetic portrayal of its protagonist, played by Joseph Gordon-Levitt, will bolster public support. “I think Oliver [Stone] will do more for Snowden in two hours than his lawyers have been able to do in three years,” he told Motherboard. Snowden will appear in theaters on Friday, two days after the campaign launches.

While Stone himself recently expressed hope that Obama would pardon Snowden, he acknowledged that it would be a dramatic reversal. Even so, Obama seems more likely to do so than current presidential nominees Hillary Clinton and Donald Trump — and as we’ve written, it would help reverse eight years of secrecy and aggressive retaliation against whistleblowers. It would also end years of uncertainty for Snowden, who has unsuccessfully sought asylum in several countries since leaving the US in 2013. He is currently living in Russia on a temporary residency permit, which will expire next year.