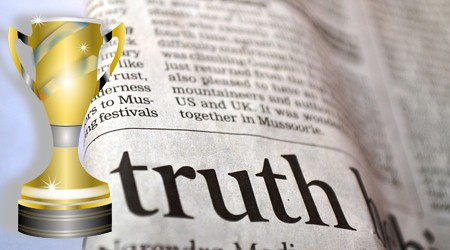 By Fairness and Accuracy in Reporting (FAIR)

It’s that time of year again, when FAIR looks back at the year and recalls some of the stinkiest media moments. There were, of course, many contenders– but only a select few can make the list.

So without further ado, we present the 2014 P.U.-litzers:

—Fox host Andrea Tantaros (12/9/14), on the release of the Senate investigation of CIA torture.

Even as the planet warms, there will still be cold days, but someone forgot to tell CNN‘sCrossfire (1/6/14):“This week’s historic cold brings out the skeptics. Will it put the climate change debate in the deep freeze?” Yes, a cold snap compelled the cable news channel to bring viewers a “balanced” debate on the existence of global warming. And that wasn’t even their worst coverage of climate for the year: Just a few months later,CNN‘s OutFront (5/21/14) decided it only needed one guest to discuss climate science: far-right pundit Ann Coulter.

-What a Boss! Award: Joe Scarborough

MSNBC wasn’t giving viewers much coverage of its parent companyComcast‘s proposed merger with Time Warner Cable. But the February 13edition of Morning Joe was an exception: It brought on both company’s CEOs, but it was Comcast chief Brian Roberts who was the focus of attention. Host Joe Scarborough pitched his boss softballs like this: “Comcast seems to be doing everything right over the past four or five years. What’s working for your company that’s not working for other companies?”  Scarborough later observed, “Even if I weren’t working here…I would be saying, ‘It’s a pretty stunning story about just how successful Comcast is right now.'”

-Who Is We? Award: USA Today

Good news! The March 7 front-page USA Today headline declared: “We’re $9,800,000,000,000 Richer.” The story told readers that household wealth was boosted by “nearly $10 trillion last year.” If that doesn’t square with how most readers are feeling, there was the inevitable “but”: It turns out that “the gains since the crisis have not been equally distributed. Most of the recovered wealth has come from higher stock prices, and many Americans are not in the market.” So “we” means, well–them, and probably not you.

On July 8, ABC World Newsanchor Diane Sawyer brought viewers the latest on the Israel/Gaza war: “We take you overseas now to the rockets raining down on Israel…. And here an Israeli family trying to salvage what they can, one woman standing speechless among the ruins.”

One problem: The photos on the screen depicted destruction in Gaza–caused by Israel, not in Israel. ABC would run a correction two days later.

Asked by the group Media Matters (10/22/14) why 62 percent of the guests onMeet the Press were white men, host Chuck Todd suggested it was out of his hands:

Todd did not offer an explanation as to why the show finds 62 percent of the “best, smartest people” to be white men.

One thing was missing in the Washington Post‘s reporting (12/9/14) on the Senate investigation of CIA torture: The word “torture.” The paper employed all the familiar euphemisms–“harsh interrogation measures,” “painful procedures,” etc.–but would only say these vicious operations were “deemed torture by program critics.” Avoiding giving torture an accurate label is a longstanding Post policy: As an editor explained in 2010, “After the use of the term ‘torture’ became contentious… we decided that we wouldn’t use it in our voice.”

-The ‘ABC, I am Your Father’ Award: ABC News

ABC is owned by Disney–and their news division makes it pretty obvious. Like when Good Morning America (5/2/14) had an “exclusive” report onABC’s parent  company’s theme park, which it described as “a land of fantasy, growing bigger and helping our imaginations grow bigger every year.” “It’s a new kind of magic at the Walt Disney World Resorts,” correspondent Ginger Zee exclaimed. The magic, it turned out, was a new kind of wristband.

ABC journalists aggressively pursued another important story in November: “Theatergoers have been rushing the box office just to see the preview of the much anticipated Star Wars movie,”World News (11/28/14) reported–Star Wars, of course, now being a Disney property. In a December 1 followup,  correspondent Nick Watt clued viewers in on some of the “secrets” revealed by the movie commercial. As he put it: “Are we all overthinking this? Yes. And that’s OK. We’re supposed to.”  Actually journalism is “supposed” to do something else.

New NPR boss Jarl Mohn, discussing changes at the public radio in an On the Media interview (9/5/14),  sounded exactly like a corporate media CEO selling his audience to “brands”:

The only thing that I think they might perceive differently is that we’re going to be talking about brands that matter a little bit more to them, ones they’re interested in. And we’re going to ask for larger commitments from these underwriters…. The audience is growing. It’s not just affluent, it’s a smart audience and it’s very engaged. What more could a brand want than this type of audience?

One of the Israeli attacks on the Gaza Strip particularly captured international media attention. An early headline in the New York Times (7/16/14) told the story perfectly clearly: “Four Young Boys Killed on Gaza Beach.”  Too clearly, apparently; the headline was subsequently changed to “Boys Drawn to Gaza Beach, and Into Center of Mideast Strife.”

In time for Labor Day, FAIR (8/28/14) looked at the guest lists for the Sunday chat shows to see how often union leaders were invited to the debate. The answer? Not once. Former and current corporate CEOs, though, made a dozen appearances. The closest labor came to being a part of the conversation was a mention of one former union leader: former Screen Actors Guild chief Ronald Reagan, who later became a notoriously anti-labor US president.

During a discussion of the Gaza War, ABC pundit Cokie Roberts (7/13/14) argued that the problem with US foreign policy was that no one fears the United States.

You know, we just haven’t made a strong enough presence in that region to have people be afraid of this country. And so I think there’s a sense that, you know, they can get away with anything they want to get away with.

So the problem with the Iraq invasion, which killed roughly half a million people, along with a 13-year occupation of Afghanistan, the destruction of the Libyan government and drone strikes that have killed thousands in Pakistan and elsewhere–is that they don’t instill enough fear.

Roberts wasn’t the only one to have this insight; New York Times columnist David Brooks explained (Meet the Press, 4/20/14):

Let’s face it, Obama, whether deservedly or not, does have–I’ll say it crudely–a manhood problem in the Middle East: Is he tough enough to stand up to somebody like Assad, somebody like Putin?

The New York Times (7/22/14) took a firm editorial position when Malaysia Airlines Flight 17 was shot down over Ukraine, allegedly by Russian-backed separatists: “Whoever unleashed a lethal missile not knowing how to distinguish between a military and a civilian plane is not only irresponsible and stupid, but a war criminal.”

The Times (7/5/88) took an equally firm, but diametrically opposed, editorial position when the US Navy shot down Iran Air 655 over the Persian Gulf: “While horrifying, it was nonetheless an accident. On present evidence, it’s hard to see what the Navy could have done to avoid it.”

A few years earlier, when the Soviet Union shot down Korean Air Lines Flight 007, the Times (9/2/83) sounded a lot like it did about the Malaysian plane: “There is no conceivable excuse for any nation shooting down a harmless airliner.” Unless, of course, that nation is the United States.