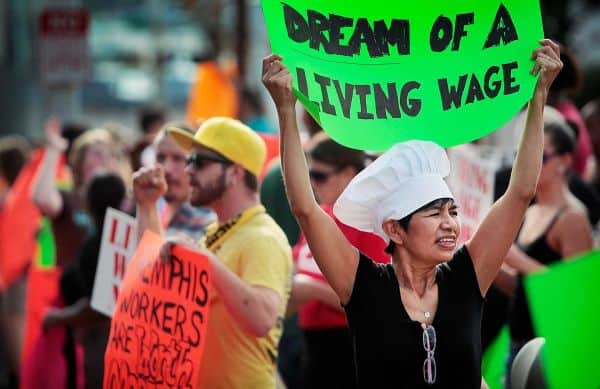 This summer, thousands of fast-food workers in the United States went on strike in cities across the country, demanding their wages be increased to $15 an hour and the ability to unionize. To no one’s surprise, they didn’t get it. As of 2012, an estimated 4.7% of hourly workers are paid at or below the federal minimum wage of $7.25 an hour. According to several groups, low- and minimum-wage workers are growing faster than any other group of earners.

Meanwhile, profits at many of the corporations that employ the most minimum-wage workers have risen. McDonald’s, Walmart and Target together employ several million Americans. While these companies’ profits have grown in recent years, most of their workers continue to earn low or minimum wages. 24/7 Wall St. identified the 10 companies that employ the most low- and minimum wage workers.

Companies that pay employees poorly fall into one of three industries: retailers such as Walmart and Sears, restaurant chains such as McDonald’s and Yum! Brands, and grocery stores such as Kroger. These industries are customer-facing and rely on a fleet low- and minimum-wage workers to take orders, stock clothing and goods and wait tables. “The service sector across the board — the retail and restaurant industries — those are the core of the low-wage labor market,” explained Jack Temple, policy analyst at the National Employment Law Project (NELP).

Perhaps a fairer measure that may indicate whether a company can afford to increase its employees’ wages is the profitability of these companies. Net income in all but one of these companies has increased over the past five fiscal years. Kroger’s net income more than tripled since fiscal year 2008 to nearly $1.4 billion. Sears’ net income, on the other hand, has declined significantly during that time. The company recorded a net loss of $930 million this year.

Temple explained: “Low-wage companies have choices. They can continue making a lot of profits, and can continue paying their CEOs an incredible amount of money by paying low wages to their employees. But they have the resources to operate profitably and pay high wages as well.”

Based on the methodology used by the National Employment Law Project in its 2012 report “Big Business, Corporate Profits, and the Minimum Wage,” 24/7 Wall St. identified the 10 companies in industries that are primarily low-wage employers. Based on annual reports and proxy filings, we also reviewed the total size of the companies’ workforces, the recent performance of the corporations in terms of revenue and profit, and the highest executive pay at these companies. Included in our analysis were total U.S. employee figures, which we estimated when the figures were not provided by the company. In keeping with the NELP methodology, all employee figures represent systemwide employment, including employees of franchisees. To avoid double-counting low-wage workers, Starbucks is an exception, as many other low-wage employers are Starbucks licensees.

These are the companies paying Americans the least (photos from Getty Images): 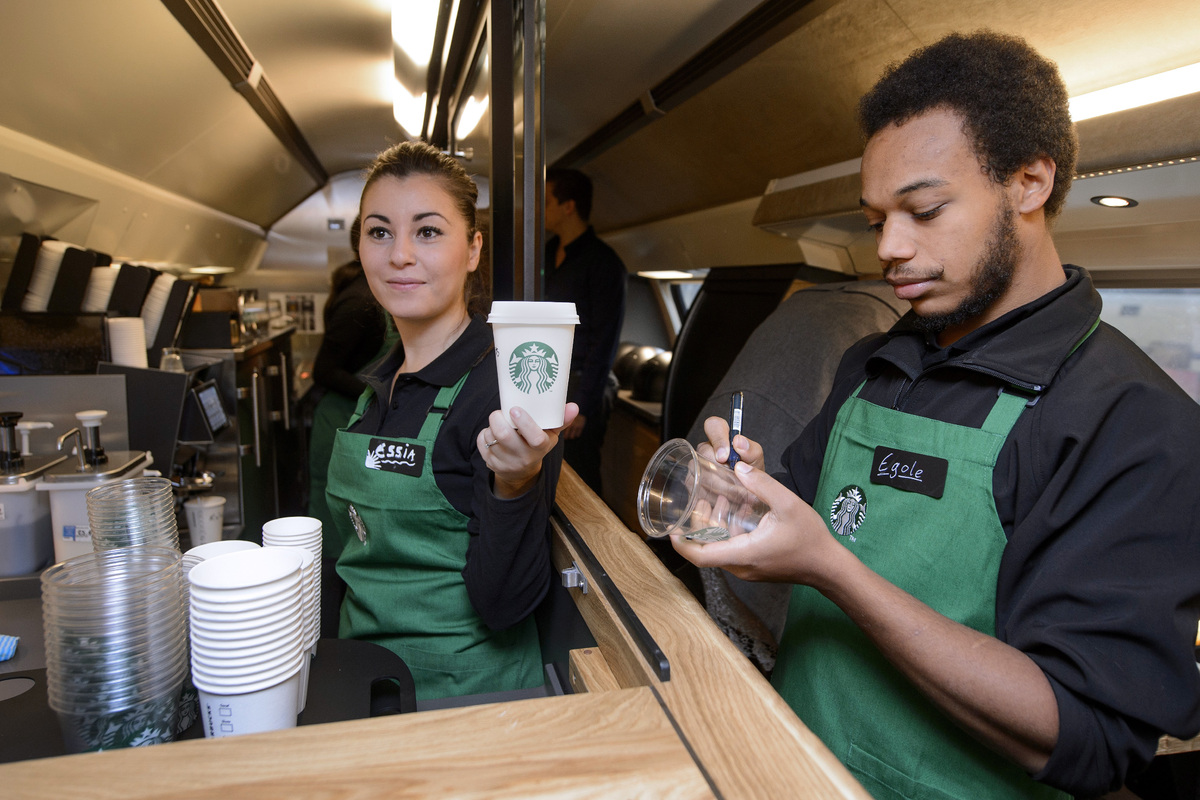 10. Starbucks
U.S. workforce: 120,000
CEO compensation: $28.9 million
Revenue: $13.3 billion
Net income: $1.4 billion
No. of U.S. stores: 5,415 / 7,049 / 13,493
Starbucks Corp. (NASDAQ: SBUX) employs 120,000 workers across the United States. Howard Schultz, the company’s CEO, has become a billionaire by turning Starbucks from a small coffee retailer into one of the world’s most famous brands. Last year, Schultz took home nearly $29 million in total compensation. Schultz is often viewed as a progressive executive, due to his support of gay marriage and his request that customers not bring guns into Starbucks locations. In an interview with CNBC in March, Schultz cautiously supported a minimum wage hike. However, according to Glassdoor.com, baristas at Starbucks are paid an average of less than $9 an hour. Schultz has downplayed the relevance of these figures.

The TJX Companies Inc. (NYSE: TJX) operates Marshalls, TJ Maxx and HomeGoods in the United States. The company’s stores are off-price retailers, meaning they buy unsold inventory from manufacturers and other retailers and resell it at a discount. TJX’s sales have grown in the past four consecutive fiscal years as the retailer also boosted its operating profit margin. Despite the company’s success, sales associates at its stores earn less than $8 an hour on average, according to Glassdoor.com.

Annual revenue at Macy’s Inc. (NYSE: M) has risen slightly over the past four years, up from roughly $25 billion in 2008 to more than $27.7 billion at the end of its latest fiscal year. Macy’s,

the second-largest department store in the United States, exceeded Wall Street’s expectations this past quarter, posting large increases in sales and earnings from the year before. Earlier this year, members of the United Food and Commercial Workers Union ratified a five-year agreement with Macy’s that should help protect the benefits of nearly 700 Macy’s employees in Maryland and Washington, D.C. According to Glassdoor.com, associates are paid under $9 an hour on average.

Revenues at Darden Restaurants Inc. (NYSE: DRI), the parent company of chains such as Olive Garden and Red Lobster, rose from just $7.2 billion in 2009 to $8.6 billion in fiscal 2013. According to Morningstar’s analysis, operating margins have been some of the best in the industry in the past few years. Additionally, instead of raising wages, the company’s funds have been used effectively “to fund growth concepts and enhance total shareholder returns.” Yet the results have not been enough for investors, some of whom have pushed for the company to split and continue to cut costs faster. In 2013, Fortune named Darden one of the “100 Best Companies to Work For,” citing access to low-cost health insurance for part-time employees. Still, pay for many workers at Olive Garden and Red Lobster is frequently less than $10.00 per hour, according to Glassdoor.com. However, many of these employees may receive tips in addition to their base pay.

Sears Holdings Corp. (NASDAQ: SHLD), owner of both Sears and Kmart, is in heavy competition with other department stores. The median hourly wage for department store workers was just $9.83 in 2012. At Sears, sales associates averaged slightly more than $8 an hour, while cashiers averaged $7.70 per hour. Kmart offered similar pay to its workers as well, with 105 cashiers and 75 sales associates reporting to Glassdoor.com that their hourly wages were less than $8.00. However, Sears Holdings may not have the necessary ability to increase its employees’ pay. Sales have slipped in the past few years, plunging from $47.8 billion in fiscal 2008 to less than $40 billion in the most recent year. The company has also failed to post an operating profit in either of the past two full fiscal years.

Yum! Brands Inc. (NYSE: YUM) CEO David Novak received more than $14 million worth of total compensation in the past fiscal year. The company’s revenue rose from $11.3 billion to $13.6 billion. Hourly wages for workers at its KFC, Pizza Hut and Taco Bell chains, however, are still often less than $8 an hour. Yum! Brands has continued to expand, opening more than five new restaurants a day outside the United States in 2012. However many American workers have expressed frustration that the company’s success has not led to an increase in their pay. This summer, fast-food workers at Yum! Brands and other fast-food chains staged protests across the country, demanding higher wages.

The Kroger Co. (NYSE: KR) employs 343,000 workers in 2,418 stores across the country. The company operates stores under several names, including Kroger, City Market, Dillons and others. A majority of Kroger’s employees are covered by collective bargaining agreements between the company and different unions. In the past few months, Kroger has agreed to terms with unions covering thousands of workers in Virginia and Texas. Kroger’s net profit was $1.5 billion at the end of the most recent fiscal year.

Target Corp. (NYSE: TGT) had 361,000 employees working at 1,778 stores in the United States at the end of 2012. The average listed salary on Glassdoor.com for a cashier or an employee on the Target sales floor is less than $9 an hour. In response to Target opening on Thursday, in advance of Black Friday, Target workers drafted a petition last year to “save Thanksgiving.” More than 300,000 people signed the petition. This year, Target stores will open on Thanksgiving Day at 8 p.m. That is an hour earlier than last year.

In the restaurant industry, the hourly median wage was just over $9.00 as of 2012. However, many McDonald’s Corp. (NYSE: MCD) employees are paid far less, with cashiers and crew members often earning only the minimum wage. In October, several McDonald’s employees were arrested for protesting their wages at the Union League Club of Chicago, where McDonald’s President Jeff Stratton was giving a speech. Between 2008 and 2012, sales and profit margins at McDonald’s have increased. Despite the company’s growth, employees are still hurting. All but admitting the low wages, McDonald’s encourages employees to enroll in food stamps and welfare programs.

There are 1.4 million Wal-Mart Stores Inc. (NYSE: WMT) associates working at the company’s 4,759 U.S. stores. Walmart recently announced it would launch Black Friday sales at 6 p.m. on Thanksgiving Day. Critics of Walmart see this as adding insult to injury — forcing retail workers who already earn low wages to cut holidays short. Criticisms like these have been part of an onslaught of claims that Walmart underpays its workers. Walmart disagrees, saying that “for tens of thousands of people every year, a job at Walmart opens the door to a better life.” According to the company, a full-time hourly wage is $12.83. Some argue that the company’s number is inflated, however, reflecting the salaries of higher-paid employees. Hourly wages for sales associates are less than $9.00, according to Glassdoor.com. Walmart’s net income rose to $17 billion last year.