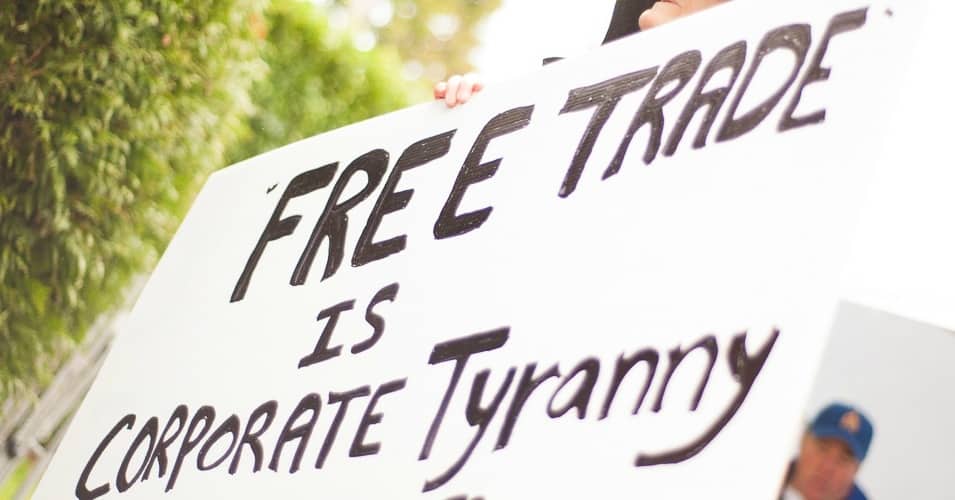 The Trans-Pacific Partnership is a disastrous trade agreement designed to protect the interests of the largest multi-national corporations at the expense of workers, consumers, the environment and the foundations of American democracy. It will also negatively impact some of the poorest people in the world.

The TPP is a treaty that has been written behind closed doors by the corporate world. Incredibly, while Wall Street, the pharmaceutical industry and major media companies have full knowledge as to what is in this treaty, the American people and members of Congress do not. They have been locked out of the process. Further, all Americans, regardless of political ideology, should be opposed to the “fast track” process which would deny Congress the right to amend the treaty and represent their constituents’ interests.

The TPP follows in the footsteps of other unfettered “free trade” agreements like NAFTA, CAFTA and the Permanent Normalized Trade Agreement with China (PNTR). These treaties have forced American workers to compete against desperate and low-wage labor around the world. The result has been massive job losses in the United States and the shutting down of tens of thousands of factories. These corporately backed trade agreements have significantly contributed to the race to the bottom, the collapse of the American middle class and increased wealth and income inequality. The TPP is more of the same, but even worse.

During my 23 years in Congress, I helped lead the fight against NAFTA and PNTR with China. During the coming session of Congress, I will be working with organized labor, environmentalists, religious organizations, Democrats, and Republicans against the secretive TPP trade deal.

Let’s be clear: the TPP is much more than a “free trade” agreement. It is part of a global race to the bottom to boost the profits of large corporations and Wall Street by outsourcing jobs; undercutting worker rights; dismantling labor, environmental, health, food safety and financial laws; and allowing corporations to challenge our laws in international tribunals rather than our own court system. If TPP was such a good deal for America, the administration should have the courage to show the American people exactly what is in this deal, instead of keeping the content of the TPP a secret.

1. TPP will allow corporations to outsource even more jobs overseas.

According to the Economic Policy Institute, if the TPP is agreed to, the U.S. will lose more than 130,000 jobs to Vietnam and Japan alone. But that is just the tip of the iceberg. ·∙ Service Sector Jobs will be lost. At a time when corporations have already outsourced over 3 million service sector jobs in the U.S., TPP includes rules that will make it even easier for corporate America to outsource call centers; computer programming; engineering; accounting; and medical diagnostic jobs.

2. U.S. sovereignty will be undermined by giving corporations the right to challenge our laws before international tribunals.

The TPP creates a special dispute resolution process that allows corporations to challenge any domestic laws that could adversely impact their “expected future profits.” These challenges would be hea rd before UN and World Bank tribunals which could require taxpayer compensation to corporations. This process undermines our sovereignty and subverts democratically passed laws including those dealing with labor, health, and the environment.

3. Wages, benefits, and collective bargaining will be threatened.

NAFTA, CAFTA, PNTR with China, and other free trade agreements have helped drive down the wages and benefits of American workers and have eroded collective bargaining rights. The TPP will make the race to the bottom worse because it forces American workers to compete with desperate workers in Vietnam where the minimum wage is just 56 cents an hour .

4. Our ability to protect the environment will be undermined.

The TPP will allow corporations to challenge any law that would adversely impact their future profits. Pending claims worth over $14 billion have been filed based on similar language in other trade agreements. Most of these claims deal with challenges to environmental laws in a number of countries. The TPP will make matters even worse by giving corporations the right to sue any of the nations that sign onto the TPP. These lawsuits would be heard in international tribunals bypassing domestic courts.

5. Food Safety Standards will be threatened.

The TPP would make it easier for countries like Vietnam to export contaminated fish and seafood into the U.S. The FDA has already prevented hundreds of seafood imports from TPP countries because of salmonella, e-coli, methyl-mercury and drug residues. But the FDA only inspects 1-2 percent of food imports and will be overwhelmed by the vast expansion of these imports if the TPP is agreed to.

6. Buy America laws could come to an end.

The U.S. has several laws on the books that require the federal government to buy goods and services that are made in America or mostly made in this country. Under TPP, foreign corporations must be given equal access to compete for these government contracts with companies that make products in America.

Under TPP, the U.S. could not even prevent companies that have horrible human rights records from receiving government contracts paid by U.S. taxpayers.

7. Prescription drug prices will increase, access to life saving drugs will decrease, and the profits of drug companies will go up.

Big pharmaceutical companies are working hard to ensure that the TPP extends the monopolies they have for prescription drugs by extending their patents (which currently can last 20 yea rs or more). This would expand the profits of big drug companies, keep drug prices artificially high, and leave millions of people around the world without access to life saving drugs. Doctors without Borders stated that “the TPP agreement is on track to become the most harmful trade pact ever for access to medicines in developing countries.”

8. Wall Street would benefit at the expense of everyone else.

Under TPP, governments would be barred from imposing “capital controls” that have been successfully used to avoid financial crises. These controls range from establishing a financial speculation tax to limiting the massive flows of speculative capital flowing into and out of countries responsible for the Asian financial crisis in the 1990s. In other words, the TPP would expand the rights and power of the same Wall Street firms that nearly destroyed the world economy just five years ago and would create the conditions for more financial instability in the future. Last year, I co-sponsored a bill with Sen. Harkin to create a Wall Street speculation tax of just 0.03 percent on trades of derivatives, credit default swaps, and large amounts of stock. If TPP were enacted, such a financial speculation tax may be in violation of this trade agreement.

9. The TPP would reward authoritarian regimes like Vietnam that systematically violate human rights.

The State Department, the U.S. Department of Labor, Human Rights Watch, and Amnesty International have all documented Vietnam’s widespread violations of basic international standards for human rights. Yet, the TPP would reward Vietnam’s bad behavior by giving it duty free access to the U.S. market.

10. The TPP has no expiration date, making it virtually impossible to repeal.

Once TPP is agreed to, it has no sunset date and could only be altered by a consensus of all of the countries that agreed to it.

Other countries, like China, could be allowed to join in the future. For example, Canada and Mexico joined TPP negotiations in 2012 and Japan joined last year.

Bernie Sanders (I-Vt.) was elected to the U.S. Senate in 2006 after serving 16 years in the House of Representatives. He is the longest serving independent member of Congress in American history. Elected Mayor of Burlington, Vt., by 10 votes in 1981, he served four terms. Before his 1990 election as Vermont’s at-large member in Congress, Sanders lectured at the John F. Kennedy School of Government at Harvard and at Hamilton College in upstate New York. Read more at his website.