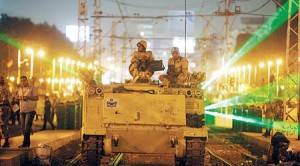 More than 1,000 Egyptians have been killed since the Egyptian military carried out a military coup. While the U.S. government has delayed some military shipments to Egypt, it has dithered about ending $1.3 billion in U.S. military aid.  U.S. law is clear: U.S. aid to militaries that overthrow democratically elected government must be cut. Simple justice and morality demand the same.

Please sign this short letter to the President, urging him to immediately stop sending your tax dollars to the brutal Egyptian military. (Copies of the letter will also be sent to our local members of Congress and our Senators.)

We have been watching the brutal crackdown by the Egyptian military with increasing alarm and sadness for the innocent lives lost. U.S. law requires an end to military aid in the event of a coup such as we have seen in Egypt — and it is clearly a military coup.