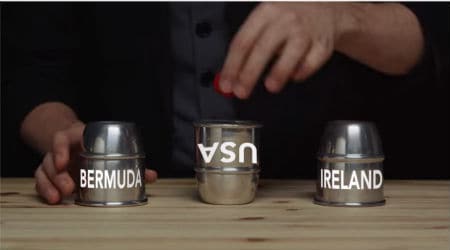 When companies dodge taxes, it’s not just the federal government that takes the hit; people, communities and entire regions pay, too.

For example, Silicon Valley’s tech companies create billionaires and magnificently reward the “investor class.” But like so many giant corporations, they grab what they can, use everyone and everything up and use their wealth and power to rig the rules to get even more.

Tech companies get a lot from government. They receive government contracts and purchases. Their products grow out of government-financed research. They use the government-provided infrastructure. They have access to publicly educated employees. They use the court system. They draw on all kinds of national, state and local services. Their foreign-manufactured products are protected at sea by our navy. The list is endless.

All of these things are the foundation of their great wealth, but they give little or nothing back to the surrounding communities and country. They get away with paying little or no taxes. They demand states and localities give them tax breaks under threat that they will relocate if they don’t get them – and then often relocate anyway even when they do get the breaks. Instead of providing direct employment with benefits, they cut costs by outsourcing to low-wage countries. When they need in-country employees they notoriously keep people at part-time, “contract out” to minimum- or low-wage outfits that provide few if any benefits, lay off older workers because they cost more and use more health care, don’t hire for diversity.

Apple is one of the world’s most valuable and profitable companies. It is a notorious outsourcer, sending jobs to low-wage countries. And it is a notorious tax-dodger. It dodges national and state taxes, while it draws heavily on the government and surrounding community.

Apple is headquartered in the U.S. Its executives, marketing, R&D, product designers, software engineers and many retail stores are in the U.S. But its profits are almost all outside of the U.S. How can that be?

When you buy an iPhone, iPad or computer in a U.S. store, Apple pays licensing, manufacturing, branding and other fees and royalties to subsidiaries based in places like Ireland and Luxembourg. Those fees and royalties are so high that Apple can book a loss in the U.S., and those subsidiaries book big profits. So taxes on those “overseas” profits are “deferred” – meaning they are owed but Apple doesn’t have to pay them until they want to.

The Australian Financial Review gives an example of how Apple dodges taxes on its iTunes sales:

More than two-thirds of the money Apple’s iTunes makes outside North America goes through the group’s Luxembourg holding company where it is not taxable, thanks to an intra-group fees agreement signed in 2008, tax documents obtained by The ­Australian Financial Review show.

While Apple pays less than 1 per cent tax in Ireland on sales of its iPhones, iPads and computers, most of its ­revenues from the sale of music and films outside the U.S. flow to a Luxembourg company, iTunes Sàrl.

Ars Technica looked at how much Apple would pay in profits they pretend to make “overseas”, in “If Apple didn’t hold $181B overseas, it would owe $59B in U.S. taxes“:

More than any other American company, Apple holds $181.1 billion in offshore accounts, according to a Tuesday report released by Citizens for Tax Justice, an advocacy group.

Other major American tech firms—including Cisco, Google, Hewlett-Packard, and Oracle—are among the largest companies that are using legal but questionable tax tricks to keep money overseas and effectively pay little to no American federal corporate taxes.

Citizens for Tax Justice concluded: “Multinational corporations’ use of tax havens allows them to avoid an estimated $90 billion in federal income taxes each year.”

“I don’t like the idea that Apple might be not paying taxes the same way I do as a person,” he said. “I pay over 50 percent of anything I make in taxes, and I believe that’s part of life and you should do it.”

When asked whether this included Apple, he responded: “Every company in the world should.”

Apple is hardly alone in this. Google, for example, has a post office box (box number 666) in Bermuda and claims $8 billion of its revenue is made there. Most Silicon Valley tech companies engage in this.

Overall U.S. companies, tech and non-tech, now have more than $2.1 trillion stashed outside of the country to dodge their taxes, representing a tax-due bill of $620 billion, with another $90 billion owed added yearly. Congress allows them to “defer” paying them as long as they keep coming up with schemes to make it look like their profits are made by non-U.S. subsidiaries.

These companies use similar schemes to avoid paying their state taxes as well.

Apple, the world’s most profitable technology company, doesn’t design iPhones here. It doesn’t run AppleCare customer service from this city. And it doesn’t manufacture MacBooks or iPads anywhere nearby.

Yet, with a handful of employees in a small office here in Reno, Apple has done something central to its corporate strategy: it has avoided millions of dollars in taxes in California and 20 other states.

Apple’s headquarters are in Cupertino, Calif. By putting an office in Reno, just 200 miles away, to collect and invest the company’s profits, Apple sidesteps state income taxes on some of those gains.

It’s not as if Apple or the other tech companies use any of California’s infrastructure, educated students, courts and other services, is it?

This in-it-for-themselves-only corporate culture (and a government that lets them get away with tax dodging) leads to other harmful effects. Cupertino, Calif., home of Apple, is an example of this.

The Guardian has a story about Cupertino’s mayor trying to get Apple to help cover some of the costs to Cupertino of Apple being based there. Here’s what happened:

The last time the mayor of Cupertino walked into Apple – the largest company in his small Californian town and, it so happens, the most valuable company in the world – he hoped to have a meeting to talk about traffic congestion.

Barry Chang barely made it into the lobby when Apple’s security team asked him to leave, he said.

“They said ‘you cannot come in, you’re not invited’.

Poor transportation, really bad traffic, infrastructure not up to date…Silicon Valley is hurting. The Guardian wrote:

Many people in Cupertino, a 60,000-person town in the heart of Silicon Valley, are beginning to organize around their overburdened city. They claim the region is struggling with aging infrastructure and booming companies whose effective tax rate is often quite low.

The power of these companies is considerable.

Convincing local politicians to battle Apple is hard, Chang said. He recently proposed that Apple – which is building a massive new campus its own employees nicknamed the Death Star, or more favorably, The Spaceship – should give $100m to improve city infrastructure. To move on the proposal, Chang only needed to get a single vote ‘yes’ among the three other eligible council members. He failed to get that vote.

Taxes are so low…

Apple paid $9.2m in tax revenue to Cupertino in 2012 to 2013, which was about 18% of the city’s general fund budget, according to an economic impact report. Coincidentally that was also exactly the same amount CEO Tim Cook was paid in 2014.

Many Of Their Workers Left Behind

Thirteen U.S. industry groups representing technology companies Amazon, Uber, Apple, Facebook and others are pushing for the next U.S. president to support the Trans-Pacific Partnership (TPP) trade deal and to make it easier to hire high-tech workers from abroad, according to a joint letter seen by Reuters.

We the People need to remember that we are supposed to be in charge. We need to say, “No, you can’t do that” to these corporations that are really only supposed to exist at all to serve our interests, provide good and safe products that do not harm us or our the environment, provide good jobs with good benefits, and pay their taxes. Why else would We the People have ever allowed these things called corporations to exist in the first place?