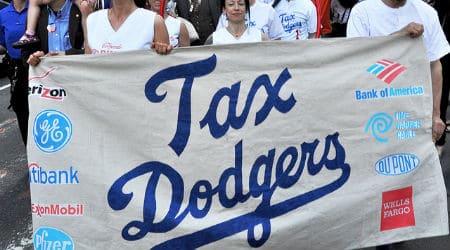 Tax day. In the District of Columbia, the main post office stays open until midnight. Taxpayers who waited until the last moment line up to get a receipt showing they filed on time. America’s civic ritual.

But not everyone participates. America’s major corporations – Apple, Pfizer, Microsoft, Citigroup – have stashed a stunning $2.4 trillion abroad in order to avoid paying an estimated $700 billion in taxes.

Under American tax law, multinationals earning profits abroad get a credit for the taxes they must pay to a foreign country. They are supposed to pay the difference between those taxes and the U.S. rate. Congress passed a loophole in the law called “deferral.” They can defer paying taxes on profits earned abroad until they return the money to the U.S.

This doesn’t make much sense. Why would Congress want to give companies an incentive to ship jobs and plants abroad to earn profits outside the U.S.? And, of course, the whole thing is rigged. Companies routinely cook their books to record profits as earned in tax havens abroad. Plus, the money doesn’t really stay there. It’s on the books as foreign profits for accounting purposes, but it’s in American banks, and circulates in our economy. The corporations can borrow against those profits if they need money for investment at home, or for buying back stock to boost CEO bonuses. Of course, deferral is just one of many loopholes.

So on tax day, all of you will be paying more in taxes than Fortune 500 companies PG&E, State Street, Con Edison, Weyerhaeuser, Duke Energy, and Qualcomm combined. That’s right, as Citizens for Tax Justice reports, these profitable global corporations earn billions but avoid paying any taxes at all in 2015.

Corporations should pay their fair share of taxes. Small businesses and domestic corporations don’t get a “deferral.” But global companies, deploying legions of lobbyists and dispersing campaign contributions, have corrupted Congress into giving them their own special tax loophole.

Even in this economy, $700 billion in lost revenue is a lot of money. As Americans for Financial Reform reports, one-tenth of it could pay to provide universal preschool for every 4-year-old in low and moderate income families for 10 years. One half could double the budget for highway repair and mass transit spending over five years. Eleven percent would give up to 9 million students two years of free tuition at community colleges for 10 years. Instead, the corporate lobby has convinced Congress to give them a loophole to evade the taxes.

And now, the corporations are gearing up a big-time drive to get Congress to forgive the taxes when they bring the money home. They promise they’ll invest in jobs. They say it will boost the economy and everyone will benefit. They rage against our corporate tax rates, although none of them come close to paying the stated rate.

The bidding war has already started. Bills are circulating – sponsored by both Republicans and Democrats – that suggest they pay less than one-fifth of the money owed. Partisan obstruction doesn’t apply when it comes to corporate chicanery.

In 2004, the last time they pulled off this scam – dressed up as “repatriation” – they made the same promises. They were given a tax rate of 5.25 percent for “repatriated” money. But the money didn’t go to investments or new jobs. The corporations that pocketed the biggest breaks actually reduced their workforces afterward. The money went to mergers and stock buybacks, all ways to pump up executive suite bonuses. Not surprisingly, more corporations also rushed to set up real or dummy operations abroad to take advantage of the next sting.

Deferral is a classic example of how, in the words of Sens. Elizabeth Warren and Bernie Sanders, the rules are rigged to favor the few. Any Congress with a wit of sense or patriotic duty would repeal deferral immediately. Let global corporations pay taxes at the same rates as do domestic companies. But that requires disrupting business as usual in Washington. It will require, dare I say it, the “political revolution” that one candidate has called for in the presidential race.

Until then, you and I will pay our taxes. Apple, Pfizer, Microsoft, Bank of America, Citigroup and many other profitable corporations will transfer their profits abroad for accounting purposes, proving the truth of real estate magnate Leona Helmsley’s infamous aphorism: “We don’t pay taxes. Only little people pay taxes.”