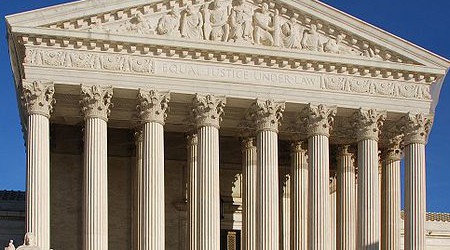 [Ed. Note: PPJC will be holding a Rapid Response Protest Demonstration on the day when the Supreme Court announces its decision in McCutcheon, whatever day that might be. Get details and sign up to attend at the link.]

Although predicting the outcome of Supreme Court cases is never a sure thing, two decisions that may be handed down any day—McCutcheon v. Federal Election Commission and Harris v. Quinn—have the clear potential to transform the meaning of the First Amendment and once again expose the court’s radically pro-corporate and anti-union agenda.

Argued in October, McCutcheon was filed by Alabama businessman Shaun McCutcheon and the Republican National Committee to overturn the present legal limits on the aggregate amount of money a person or corporation can contribute directly to candidates for federal office, political parties and political campaign committees during any two-year election cycle. Currently, the biennial maximum is $123,200. The issue of whether the limit on direct campaign contributions is constitutional was left unresolved by the court’s 2010 Citizens United v. Federal Election Commission case.

Argued in January, Harris was filed by the National Right to Work Legal Defense Foundation on behalf of a group of nonunion home care workers in Illinois who object to paying “fair share” fees to the Service Employees International Union to cover the costs SEIU incurs by serving as the exclusive representative for all home care workers in the state. Fair share fees, which have long been approved by the court, are paid in lieu of formal dues by employees who receive the benefits of collective bargaining but choose not to become union members.

Although it’s easy to spot the common right-wing politics driving McCutcheon and Harris, the two cases also share a less discernible right-wing legal ideology that has found a particularly receptive home in the Supreme Court under the leadership of Chief Justice John Roberts. This is the view—essentially a double standard—that corporations and the wealthy, as stewards of democracy, are entitled to heightened First Amendment protections to freedom of speech and association, and that unions are entitled to little, if any.

This double standard is one of the Roberts court’s great sleights of hand. As UC Irvine School of Law professor Catherine Fisk and Dean Erwin Chemerinsky explained in a Februaryissue brief from the American Constitution Society for Law and Policy, to appreciate and understand the double standard you have to go back and analyze the court’s most recent landmark rulings on campaign and union financing—the Citizens United decision and the 2012 ruling in Knox v. SEIU.

On its face, the court’s central holding in Citizens United applied equally to corporations and unions, permitting both under the First Amendment to spend unlimited general treasury funds—so-called independent expenditures—on advertisements calling for the election or defeat of political candidates. In a separate section of the opinion dealing specifically with dissenting corporate shareholders but potentially applicable to union dissidents as well, the court added that it was untroubled that businesses might spend their general funds on political causes without explicit approval from all shareholders. Any dissenting shareholders, the court’s majority reasoned, could protect their interests “through the procedures of corporate democracy” and the principles of majority rule, or they could take their investments elsewhere.

But as Fisk and Chermerinsky note, the court employed exactly the opposite reasoning in Knox when it held that a union representing public employees could not assess an emergency fee on nonunion workers to support political spending to defeat an anti-labor ballot measure unless the workers explicitly opted to approve such spending. As the Knox opinion instructs, the First Amendment protects not only the right to speak but also the right not to be compelled to speak. Requiring dissenting employees to help pay for political spending they don’t support amounts to compelled speech in violation of the First Amendment, according to the Knox ruling. Unlike Citizens United, the Knox opinion never extols the procedures of union democracy or for that matter ever mentions the First Amendment rights a union has to speak on behalf of the majority of its members.

McCutcheon and Harris are important not only because they promise to perpetuate the court’s double standard on the First Amendment but because they threaten to extend it in new and unacceptable ways. If the McCutcheon plaintiffs prevail, the floodgates opened by Citizens United to independent expenditures by super PACs and shady nonprofit groups exempted from disclosing their donor lists—which exceeded $1 billionin 2012 and which conservative groups dominated by a better than 2-1 spending ratio—would give way to unlimited contributions straight to the coffers of candidates and their campaign committees. The accompanying long-term dangers to what remains of our democracy would expand exponentially.

A victory for the plaintiffs in Harris could be even more ominous. According to the Bureau of Labor Statistics, the percentage of unionized wage and salary workers in our economy has dropped to 11.3 percent from 20.1 percent in 1983. The unionization rate in the private sector stands at an abysmal 6.7 percent. The public sector, by contrast, boasts a unionization rate of 35.3 percent.

Although the Knox decision was limited to fair share assessments levied on nonunion workers for political spending, a worst-case scenario ruling in Harris could easily build on Knox to outlaw all fair share fees as compelled speech. Such a ruling not only would cripple public unions financially but would open the door to further legal challenges to the basic rights of government employees to join unions to act as their exclusive workplace representatives.

The Harris case thus portends a full-blown assault on public sector unions, the last bastion of organized labor and arguably the last barrier to the long-cherished conservative dream of turning the entire country into one big right-to-work state in the mold of Mississippi, Alabama and Texas.

But will the conservative dream come to fruition? Will the Roberts court turn the First Amendment on its head in McCutcheon and Harris to advance the privileges of oligarchy at the expense of nearly everyone else? We should have an answer, perhaps, in a matter of days.