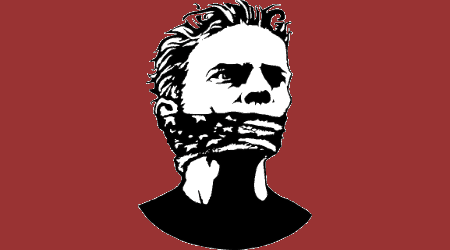 Last week, a UC Regents working group released a proposed set of Principles Against Intolerance, created in response to a series of anti-Semitic incidents on UC campuses. On March 23, the Regents will vote on whether to officially adopt those principles. Controversially, the document not only condemns anti-Semitism, but also anti-Zionism.

The LA Times asked UC faculty members to argue for and against the statement. Read the opposing view here.


Carefully adorned in the language of moderation and tolerance, the final report of the UC regents working group on principles against intolerance is a thinly disguised attempt to suppress academic freedom and stifle open debate on our campuses.

The report presents itself as the solution to a problem that it is actually helping to manufacture. Its point of departure is the unfounded claim that “manifestations of anti-Semitism have changed and that expressions of anti-Semitism are more coded and difficult to identify.” It then not so subtly shifts to a generalization so broad it sweeps all before it: “[O]pposition to Zionism often is expressed in ways that are not simply statements of disagreement over politics and policy, but also assertions of prejudice and intolerance toward Jewish people and culture.” And so on to the inevitable coup de grace: “Anti-Semitism, anti-Zionism and other forms of discrimination have no place at the University of California.”

In a few paragraphs, the report conflates two distinct phenomena: hatred of Jews on the one hand, and criticism of a political ideology on the other. The overall claim is that the latter — objections to the Israeli state, its military occupation, its demolition of homes, its two-tiered system of citizenship — is the new, covert form of anti-Semitism. These are issues regularly debated in public discourse; it is imperative that they be freely discussed in universities as well. But if the report is adopted, scholarship and teaching that include critical perspectives deemed “anti-Zionist” could be branded illegitimate, and open discussion shut down.

All forms of discrimination must be opposed, including anti-Semitism, but this report is neither inclusive nor balanced in its representation of how racism operates on our campuses. In an age of unprecedented Islamophobia, Arab and Muslim students have suffered overt prejudice and repression of their views, yet the document makes only passing reference to their experience. It is less interested in actual conditions of intolerance that we all must oppose than in singling out and redefining anti-Semitism to include political viewpoints that it seeks to suppress.

The report is merely the latest manifestation of a well-funded and increasingly desperate — even panicky — political campaign to eradicate criticism of Israeli policy from American campuses. A compelling student movement for Palestinian rights has emerged, as have a proliferation of Jewish voices distancing themselves from traditional Zionist narratives and affirming the Palestinian right to self-determination, freedom and equality. Not coincidentally, the focal point of this campaign has been an attempt to get universities to adopt a widely discredited State Department definition that collapses the distinction between criticism of Israel and hatred of the Jewish people.

Although the UC report claims the need to track “the evolving nature of anti-Semitism,” what needs to be tracked instead is the drive to hijack, for malign political purposes, the definition of a genuine scourge. Ironically, by persistently misidentifying anti-Semitism, the promoters of this politicized new definition will, like the boy who cried wolf, make it more difficult to combat the real thing when it occurs.

Whereas the UC working group met with individuals and institutions unconnected to the university who have been promoting this redefinition of anti-Semitism, it seems to have made no effort to find balance by consulting the many scholars of Zionism, anti-Semitism and the question of Palestine on UC’s own faculty, relying instead on a sophomoric dictionary entry on of Zionism.

And the report was produced under a cloud of external pressure by, among others, UC regent Richard Blum, who publicly issued a veiled threat: “My wife, and your senior senator” — Dianne Feinstein — “is prepared to be critical of this university,” unless UC finds a way to punish the supposed new form of anti-Semitism.

The report is as bad as it sounds. Its adoption would be catastrophic. It would be a travesty to let UC become a place where censorship triumphs over the pursuit of truths, however uncomfortable some may find them.