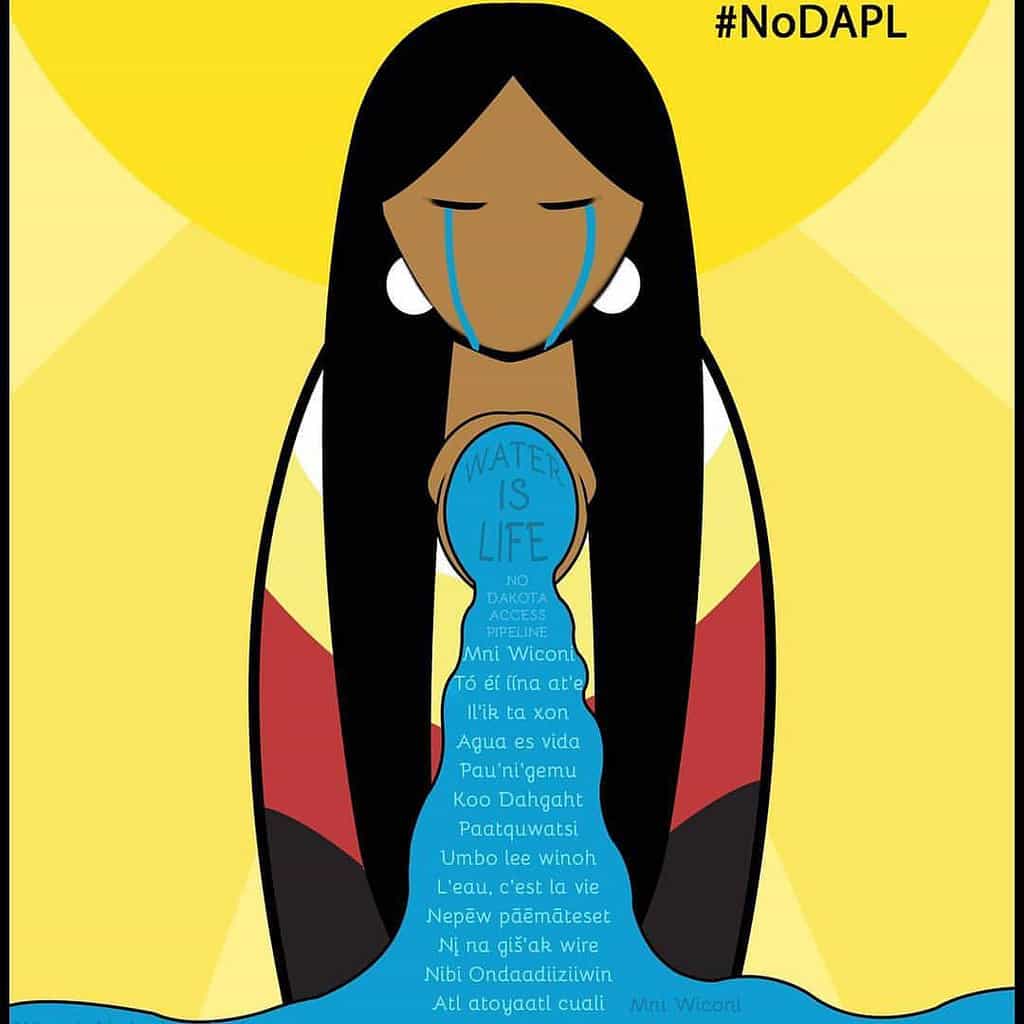 The Missouri River, the longest river in North America, has for thousands of years provided the water necessary for life to the region’s original inhabitants. To this day, millions of people rely on the Missouri for clean drinking water. Now, a petroleum pipeline, called the Dakota Access pipeline, is being built, threatening the river. A movement has grown to block the pipeline, led by Native American tribes that have lived along the banks of the Missouri from time immemorial. Members of the Dakota and Lakota nations from the Standing Rock Sioux Reservation established a camp at the confluence of the Missouri and Cannonball rivers, about 50 miles south of Bismarck, North Dakota. They declare themselves “protectors, not protesters.” Last Saturday, as they attempted to face down massive bulldozers on their ancient burial sites, the pipeline security guards attacked the mostly Native American protectors with dogs and pepper spray as they resisted the $3.8 billion pipeline’s construction, fighting for clean water, protection of sacred ground and an end to our fossil-fuel economy.

Standing Rock Sioux set up the first resistance encampment in April, calling it Sacred Stone. Now there are four camps with more than 1,000 people, mostly from Native American tribes in the U.S. and Canada. “Water is Life” is the mantra of this nonviolent struggle against the pipeline that is being built to carry crude oil from the Bakken oil fields of North Dakota to Illinois.

Saturday was a beautiful, sunny day. Together with Laura Gottesdiener and John Hamilton of “Democracy Now!,” we spent the morning filming interviews. That afternoon, delegations walked down the road to plant their tribal flags in the path of the proposed pipeline. Many were shocked to see large bulldozers actively carving up the land on Labor Day weekend.

Hundreds of people, mostly Native Americans, lined the route, yelling for the destruction to stop. A group of women began shaking the ranch fencing, and without much effort it fell over. The land defenders began pouring through. Several young men from the camp arrived on horseback.

The bulldozers retreated, but the security guards attempted to repel the land defenders, unleashing at least half a dozen vicious dogs, who bit both people and horses. One dog had blood dripping from its mouth and nose. Undeterred, the dog’s handler continued to push the dog into the crowd. The guards pepper-sprayed the protesters, punched and tackled them. Vicious dogs like mastiffs have been used to attack indigenous peoples in the Americas since the time of Christopher Columbus and the Spanish conquistadors who followed him. In the end, the violent Dakota Access guards were forced back.

This section of the pipeline path contained archeological sites, including Lakota/Dakota burial grounds. The tribe had supplied the locations of the sites in a court filing just the day before, seeking a temporary halt to construction to fully investigate them. With those locations in hand, the Dakota Access pipeline crew literally plowed ahead. Standing Rock Sioux Tribal Chairman David Archambault told us on the “Democracy Now!” news hour: “They were using the dogs as a deadly weapon. … They knew something was going to happen when they leapfrogged over 15 miles of undisturbed land to destroy our sacred sites … they were prepared. They hired a company that had guard dogs, and then they came in, and then they waited. And it was—by the time we saw what was going on, it was too late. Everything was destroyed. They desecrated our ancestral gravesites. They just destroyed prayer sites.”

At the camp, we interviewed Winona LaDuke, an Ojibwe leader from the White Earth Nation in northern Minnesota. She recently led a campaign that succeeded in blocking another pipeline that threatened the White Earth’s territory. She commented on North Dakota Gov. Jack Dalrymple’s support of suppression of the Standing Rock protests: “You are not George Wallace, and this is not Alabama. This is 2016, and you don’t get to treat Indians like you have for those last hundred years. We’re done.”

The battle against the Dakota Access pipeline is being waged as a renewed assertion of indigenous rights and sovereignty, as a fight to protect clean water, but, most importantly, as part of the global struggle to combat climate change and break from dependence on fossil fuels. At the Sacred Stone, Red Warrior and other camps at the confluence of the Missouri and Cannonball rivers, the protectors are there to stay, and their numbers are growing daily.