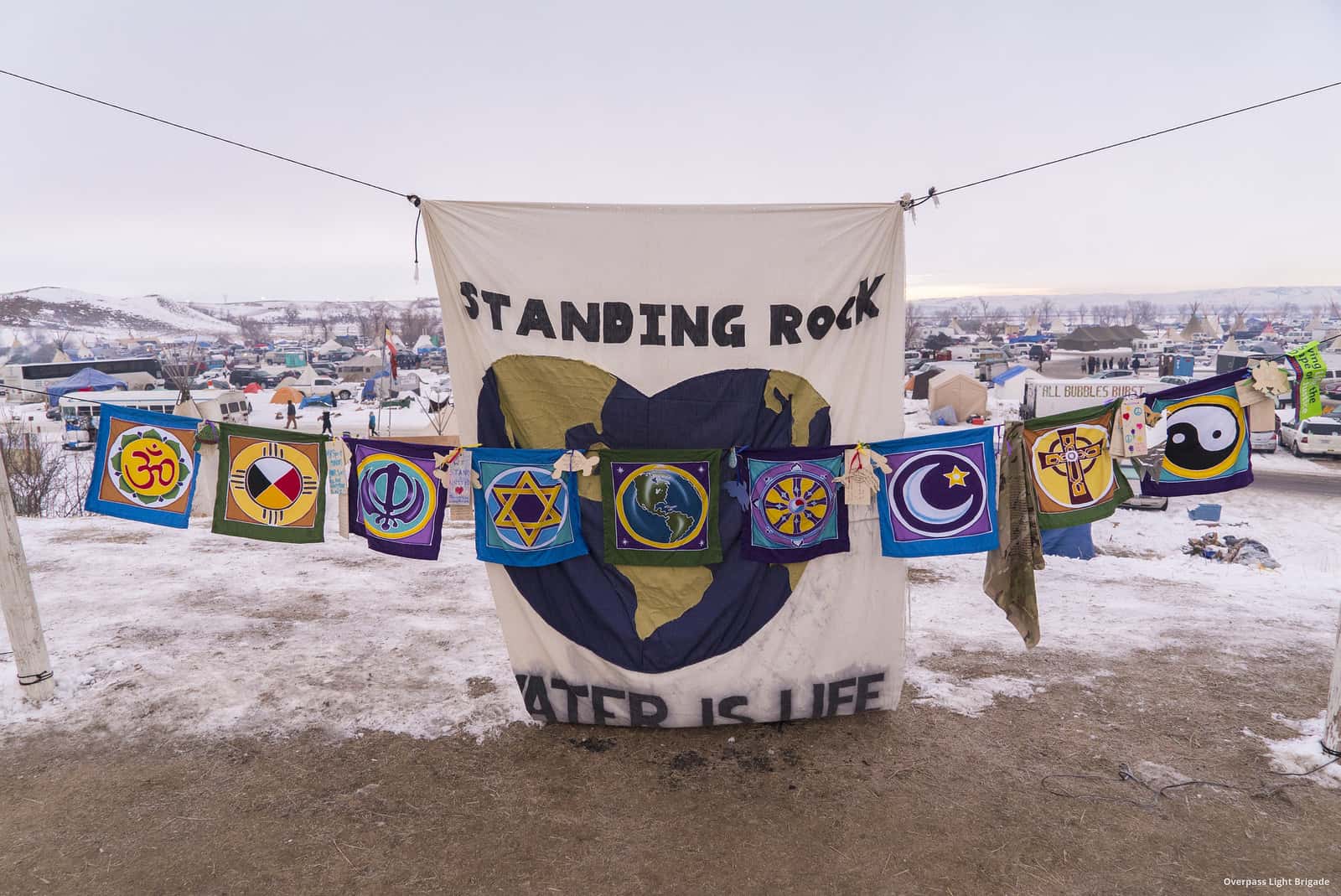 The rerouting of the Dakota Access pipeline was a much-needed victory for the rights of indigenous peoples and the sanctity of the environment. The stand at Standing Rock also proved to be a victory for a human right we don’t hear much about: the freedom of peaceful assembly.

Peaceful assemblyis the presence of individuals in a public forum as an expression of opinion. Often confused with free speech or other expressive human rights, assembly is expressed through presence, what I call the “body as voice.” Thus, when, where and how we make our presence known to others is fundamental to the expression of assembly.

2016 was chock-full of protests of every kind around the globe. But we need look no further than the fields of North Dakota for a living example of why freedom of peaceful assembly is regarded as an inalienable human right, and of the obstacles and threats faced by its practitioners, in this case, water protectors.

Standing Rock showed us the long odds faced by those who peaceably assemble. It began with ominous walls of armored police and military vehicles. Our social media feeds filled with photos of dogs sicced on peaceful protesters, and of traumatic injuries from rubber bullets, tear gasand the like. New and shocking abuses of power included turning firehoses on a crowd in subfreezing temperatures. And it wasn’t just the state; locals threatened water protectors with violence as well.

The Standing Rock Sioux and their allies held themselves to high standards of peaceful action and prayer and did not provoke law enforcement. They were attacked because they amplified their voices by taking space with a long-term encampment, an increasingly popular mode of assembly in the 21st century.

Violence is not the only indignity and human rights violation faced by protesters. Other, more guileful threats awaited them. Take the letter written by Col. John Henderson of the U.S. Army Corps of Engineers to tribal chairman David Archambault the day after Thanksgiving. In the letter, Henderson told the protesters they’d have to vacate the Oceti Sakowin camp for their own safety. In return, he offered them a “free speech zone.”

The letter (and a similar one from North Dakota Gov. Jack Dalrymple days later) focused on logistics and safety but entirely ignored the sanctity of expressive human rights—a fundament of civil society. The offer of a free speech zone tasted especially sour after years spent watching authorities erect cages and pens—meant to hold demonstrators—at events like party conventions.

The ultimatums from authorities to shut down the camps for reasons of safety and security rang hollow. If the safety of protesters was a concern, what government agency is more perfectly equipped than the Corps of Engineers to provide such protection?

I hastily wrote a letter to Col. Henderson, and in a few days, over 2,500 people co-signed it. I informed him that not only did the state (and, yes, the U.S. Army Corps of Engineers) have an obligation to protect the peaceful assembly from intervention; it was also his duty to provide material support to promote its expression. He was in a perfect position to defend his fellow citizens’ human right to freedom of peaceful assembly and to uphold international law and custom.

2016 has shown us many examples of the worst abuses faced by peaceful assemblies. Media blackouts have strangled demonstrations in China, Ethiopia and Baton Rouge. Outright protest bans smothered the voices of the otherwise voiceless in Zimbabwe and Egypt. Torture, exile, indefinite imprisonment and murder have taken place in many corners of the world including Bahrain and Kazakhstan. The stories are chilling.

Yet the year ended with some unexpected successes. The people of Polandhave awoken and peaceful assemblies are placing a “check-and-balance” on the far-right government. In South Korea,once again, mass demonstrations seem close to toppling a corrupt president.

This brings us back to the age-old question: what practices lead a peaceful assembly to achieve its stated social, political or economic goals? Again, in America, we might look to Standing Rock for clues.

First, the water protectors have committed themselves to nonviolence to a degree that would make Martin Luther King Jr. proud. By maintaining peace and prayer, they create a foil for all those armored tanks and sound weapons looming over them, confirming them as targets for oppression and bolstering their legitimacy with the broader public.

Second, they maintained control of the time, place and manner of their assembly. The Standing Rock Sioux pledged to hold assembly until they are certain the Dakota Access Pipeline will not be built. While past the peak of 11,000 people, the camps stand strong, braving the harsh North Dakota winter. They’ve maintained their physical presence and refused proposals to move to other locations. And the manner of their assembly—community and prayer—became the culture of the camp.

Last, an unaffiliated group sympathetic to their cause joined the fight. In early December, thousands of war veterans came together from around the country to form a human shield around the water protectors. While the message of the water protectors had already been spreading, the message itself changed when it was no longer the specific concern of a specific minority. The mass mobilization of an entirely different subset of the population broadened the concern as an American one, not an Indian one.

There’s no irrefutable evidence that these actions led directly to the Obama administration’s refusal of an easement to Energy Transfer Partners. Because the traits of peaceful assembly can never be perfectly replicated, it remains difficult to establish—let alone research—what makes a peaceful assembly effective. A 2013 paper by the Initiative for Policy Dialogue determined that 37 percent of protests achieved their social or economic aims.

The 21st century is an era of uncertainty. To regain control of civil society, people will have to employ the entire democratic toolbox. We must continue to look to positive examples and successes like Standing Rock for clues to create a prosperous future.

How then do we inch that success rate up to 38 percent, 50 percent or more? Because of the looming administration change in Washington, the rerouting of the pipeline at Standing Rock may be a temporary victory. But the water protectors stand their ground in the biting cold and may continue to do so well past Jan. 20.

Dan Aymar-Blair is executive director and co-founder of the Article 20 Network,which defends and advances the human right to freedom of peaceful assembly worldwide.