I took part in one of the 1500 Walmart protests this past Black Friday. It gave me a new perspective on NSA Surveillance. 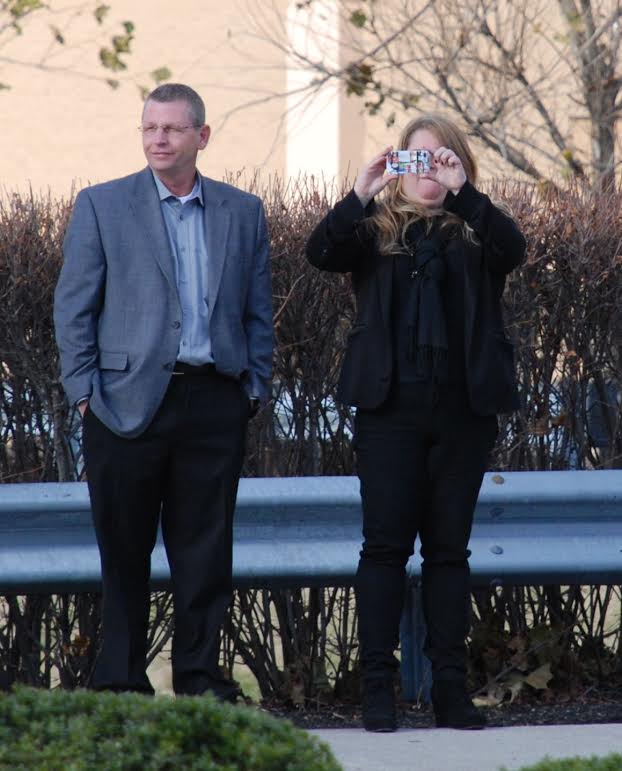 Walmart “associates” photographed by the author’s husband who were busy photographing the gathering protesters, some of them employees themselves, outside a Walmart on Black Friday in Secaucus, New Jersey. (Credit: Frank Leonardo)

Well before noon my husband and I were sitting on a sunny bench in front of theWalmart in Secaucus, New Jersey. To the Walmart security agents, conferring with groups of Hudson County Sheriff’s officers, we must have looked like the silver haired elderly couple that we are. They didn’t seem to realize that we, like they, were waiting for the demonstrators to arrive.

“Some of these demonstrators want to get hit by a cop,” a young security man said. Perhaps he was only currying favor with the “real” cops when he assured them that if such a thing occurred that day, no one would later find those pictures on any Walmart surveillance camera. [At the risk of ruining the suspense, nothing remotely like that happened.]

It was now almost twelve-thirty and there was still no demonstration in sight so we left our bench to scout the perimeter of the parking lot. From its furthest corner I spotted a line of banners and pickets across a highway. While we had been waiting at the obvious meeting place—right in front of the store—two bus-loads of protestors had arrived and been barred from entering the Walmart parking lot. Secaucus Sherriff’s officers directed us courteously across the multi-lane highway where we, too, could be out of sight.

Once there I scavenged for leaflets so I could go back to the store’s entrance and inform Black Friday shoppers how little the people helping them inside are paid. (A common poster of the employee group ‘OUR Walmart‘ reads simply “25K.” That’s not the low-wage they’re protesting, it’s the annual full time wage they aspire to when they form a union.)

I wasn’t worried about being arrested for leafleting on Walmart property because I know my free speech and labor law—or so I thought. Marsh Vs. Alabama, a 1940s Supreme Court case, established that a company town that included the functional equivalent of a business district, couldn’t deny the exercise of free speech or religious liberty, (the case involved Jehovah’s Witnesses) even though the entire city was company property.

Since then, shopping malls have become America’s functional business districts and several clear federal court decisions gave unions the right to leaflet and even picket on the “streets” of a shopping mall.

But it’s a good thing I didn’t try to exercise my inalienable rights last Friday because recent court decisions have taken them back. My right to leaflet or speak on property as public as the Walmart parking lot now depends, I just learned, on various, and still evolving, state laws. You can probably guess in what direction most have been evolving.

But why should I, an outsider, do the leafleting for a union organizing campaign? Since the 1930s it’s been illegal to fire employees simply because they join or promote a union. In that sense Walmart employes have free speech guarantees inside the store that I lack in the parking lot. But at the start of the ‘OUR Walmart’ movement the company fired about a score of the group’s early members. Despite the law, that’s a common employer move and it makes good sense. Labor law violations are policed by the National Labor Relations Board. Presidential appointments to that board have been even more delayed than appointments to the federal judiciary. Maybe the recent change of Senate filibuster rules will alter that—maybe not.

As it stands now, an employer who fires someone for joining or speaking in favor of a union may—just may—have to give the fired worker some weeks of back pay a few years hence. But what does that matter once the union has been defeated?

Employees organize because they want to improve their working conditions and their pay. It’s effective to show them that joining a union is a quick way to reduce your pay to zero. There’s no reason to be subtle about it.

Maybe that’s why it was easy for my husband to snap a picture [attached] of two Walmart people observing and photographing the demonstrators. Like the Pinkertons of earlier strike busting tradition, they have no reason to hide the fact that they have their eyes on you. But some of Walmart’s neo-Pinkerton surveillance capacities still surprised me.

At one point the woman with the camera checked a hand held “device” and told the man with her that the demonstrators across the highway were about to “moblize.”

I don’t know if she got her information through sophisticated tapping of the organizers or merely following our twitter feeds. But it reminded me that I personally have more to fear from corporate espionage then NSA spying. Unless you’re a fundamentalist terrorist, (or an American who will never need a raise,) you probably do, too.

Barbara Garson is the author of two classic books about work: All the Livelong Day: The Meaning and Demeaning of Routine Work. Her newbook is “Down the Up Escalator: How the 99% Live“