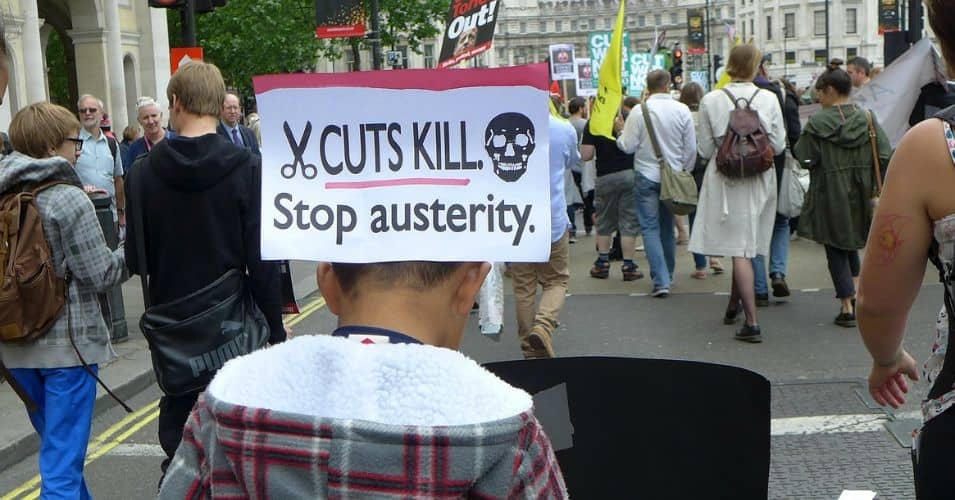 A march against austerity in London. (Photo: Paul de Gregorio/flickr/cc)

Austerity, the tool of neoliberal capitalism, stands up to Greek democracy and stares it down. Oh well.

Pope Francis, speaking this week in Paraguay, cried to the nations of Planet Earth: “I ask them not to yield to an economic model . . . which needs to sacrifice human lives on the altar of money and profit.”

But we have yielded to this economic model, in thought, word and deed:

“At issue,” USA Today informs us, “is whether Greece has taken adequate steps to cut spending and raise taxes to deserve the new three-year, $59 billion infusion of funds it has requested, and whether it can be trusted to follow through on the austerity program it has proposed as the price for new loans.”

The pope’s words haven’t penetrated the pseudo-objective certainties of financial reporting, much less the dark sanctuaries of money and power. But they must. And eventually they will, or human evolution is dead. An allegedly impersonal economic structure, which quietly benefits the infinitesimally few who have far more than they need, is no foundation for our future.

This economic system is a relic of the Industrial Age, or perhaps it’s a relic of the Agricultural Revolution. It’s imbued with deep prejudices — human beings can be bought and sold, the nurturing of human life (women’s work) has no monetary value whatsoever — and reinforces our place outside the circle of life, separated from one another and from our deepest values.

Climate change and poverty are intertwined, the pope cries out in his stunning encyclical, “Laudato Si” — “Praised Be” — which reaches well beyond traditional Catholicism in its scope and message . . . and well beyond the parsimonious morality of global capitalism. We must, he declares, “look for solutions not only in technology but in a change of humanity” and “replace consumption with sacrifice, greed with generosity, wastefulness with a spirit of sharing.”

And we cannot bring about a change in humanity without a change in our economic system, which asks for sacrifice only from those who already have next to nothing and has no language that values generosity, except the sort that flows from the poor to the rich (but then it’s called “interest”). The present system does not acknowledge our connectedness to one another or to the planet or in any way understand that true, lasting prosperity emerges from sharing and giving, not exploitation.

“But the campaign of bullying — the attempt to terrify Greeks by cutting off bank financing and threatening general chaos, all with the almost open goal of pushing the current leftist government out of office — was a shameful moment in a Europe that claims to believe in democratic principles,” Paul Krugman wrote recently in the New York Times. “It would have set a terrible precedent . . . even if the creditors were making sense.

“What’s more, they weren’t. The truth is that Europe’s self-styled technocrats are like medieval doctors who insisted on bleeding their patients — and when their treatment made the patients sicker, demanded even more bleeding.”

What God are we worshipping?

In his book Sacred Economics, Charles Eisenstein writes: “It is hugely ironic and hugely significant that the one thing on the planet most closely resembling the forgoing conception of the divine is money. It is an invisible, immortal force that surrounds and steers all things, omnipotent and limitless, an ‘invisible hand’ that, it is said, makes the world go ’round.”

And thus Greek ATMs have no euros to dispense. “Without more help from the European Central Bank,” the USA Today article continued, “the Greek banking system may soon run out of cash” — implying that cash has the same sort of objective existence as oil or wheat or diamonds. That’s absurd, of course. Its existence is purely symbolic: an exchange medium with a commonly agreed-upon value backed by a government or central bank.

Krugman, describing the mysterious persistence of this medium, wrote that “if the money doesn’t start flowing from Frankfurt (the headquarters of the central bank), Greece will have no choice but to start paying wages and pensions with IOUs, which will de facto be a parallel currency — and which might soon turn into the new drachma.”

Money, in other words, is a function of social need. It is not an independent entity controlled solely by a financial priesthood, whose terms for its use — high interest rates, austerity, endless debt and poverty for some, endless freedom to exploit the human and environmental commons for others — are absolute.

Imagine a currency that serves a humane, intelligently conceived economic system, one that has at its core an awareness that all life is sacred. Imagine this reality reflected, rather than spurned, in every financial transaction that takes place, no matter how small, no matter how large.