SOTU: Is Obama’s New Progressive Agenda Too Little, Too Late? 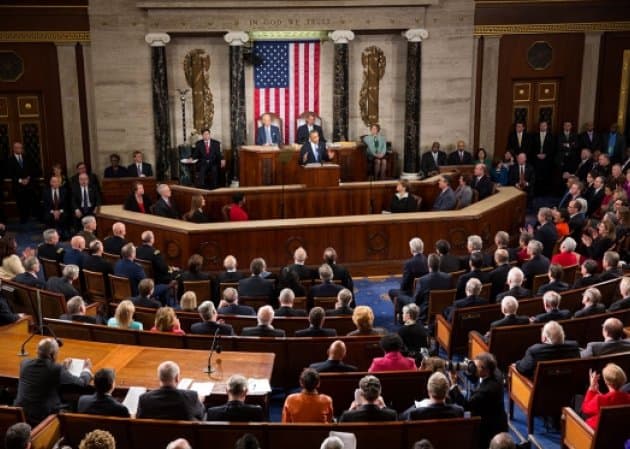 These were some of the initiatives President Barack Obama proposed in his latest State of The Union address.

“Will we accept an economy where only a few of us do spectacularly well? Or will we commit ourselves to an economy that generates rising incomes and chances for everyone who makes the effort?” he said, opening the speech. “So tonight, I want to focus less on a checklist of proposals, and focus more on the values at stake in the choices before us. It begins with our economy.”

But is Obama’s better-late-than-never wish list of progressive policies really better? Or is it little more than political theatre coming as Republicans have their firmest grip on Congress in years?

Yes, it is pleasing when unruly Republicans have to sit through a nationwide presidential address and hear a string of articulate liberal analyses and remedies. Obama, as every recent president, spoke of what America needs to thrive and put forth his to-do list, pointing to Americans seated in the House gallery to illustrate the stakes and real-life impacts.

“The verdict is clear.  Middle-class economics works. Expanding opportunity works. And these policies will continue to work, as long as politics don’t get in the way,” the president said, after talking about the struggles faced by Rebekah and Ben Erler of Minneapolis.

“So what does middle-class economics require in our time?” he continued. “First – middle-class economics means helping working families feel more secure in a world of constant change. That means helping folks afford childcare, college, health care, a home, retirement – and my budget will address each of these issues, lowering the taxes of working families and putting thousands of dollars back into their pockets each year.”

But if history is a guide, almost all of Obama’s initiatives will falter. History is filled with presidents proposing and Congresses disposing. In last year’s speech, Obama called for, among other things, reforming the federal tax code, raising taxes on fossil fuel industries, cutting student loan costs, making pre-kindergarten available to all four-year-olds, raising the federal minimum wage, and creating automatic IRAs for employees. All of these proposals died in Congress, and that was when Democrats still held the Senate.

This pattern highlights a persistant problem with Democrats. Too many wave populist flags when they are politically weak, not when they have the power to pass strong laws and implement them. And they do not press progressive demands—which typically poll well nationally—no matter who holds congressional majorities.

To be fair, when Obama took office in 2009 his top challenge was staunching a global financial crisis. He and the Democratic-controlled Congress had little bandwidth for wider good government initiatives. As a candidate, Obama also pledged to bring a post-partisan attitude to the Capital, which put compromise with the GOP ahead of implementing a progressive agenda.

It’s easy to note the obvious about State of the Union speeches: that they are more about pomp than about lifting the circumstances of Americans. But this spectacle underscores a serious question about top Democrats. Why is it that politicians like Obama—who started as liberals, put those values in a drawer once in higher office, and resurrected them at their career’s twilight—don’t stand by those values all along? Why do they see the light when their window of opportunity is quickly closing?

There are lots of theories about what Obama is doing. The most salient reflect a political truism: By seizing the initiative in any debate, or raising issues that frame the agenda, one can rally one’s base and build resistance to opponents’ reactions. Nate Cohn, The New York Times’ pollster, said this is happening now—saying that Obama’s actions are to cement his legacy, hold the line on the GOP rolling back his achievements, and frame the debate for the 2016 presidential race.

“There is not much evidence that liberal voters over all have become notably more supportive or energized as a result of a more active or more progressive administration,” he wrote. But “Mr. Obama’s surge among Hispanic voters might be particularly telling. It is a sign that Democratic-leaning voters dissatisfied with Mr. Obama’s performance might not be so disillusioned that they can’t be lured back to the Democrats by the issues and messages that brought them to the party in the first place.”

The problem with this kind of analysis—which surely is partly correct—is it bodes well for whoever is the Democratic candidate in 2016, but what about between then and now?

Gas prices are down. The stock market is up. Consumers have more spending money. That is mostly why Obama’s approval ratings are edging upward and are now 46 percent. It also gives the White House some power, because it underscores that Obama has helped to revive some corners of the economy.

But does anyone really think that this Congress is going to agree to a higher capital gains taxes and taxes on banks, or impose a transaction tax to curb Wall Street speculators? Or find $60 billion to pay for free community college tuition? Or they will not try to deport the dreamers—the American-raised children of undocumented immigrants? Or take real steps to help the middle-class?

Addressing inequality may be a  theme in Obama’s highest-profile speech of the year, but the richest Americans keep getting richer and their defenders in Congress astoundingly accuse Obama of inciting class warfare.

Obama isn’t out of ideas. He’s out of luck given the GOP’s intransigence and congressional majority. Despite his upbeat language, the state of the union is not great. It’s politically stalemated. It’s economically fractured. Too many problems keep growing. Obvious solutions get ignored. And talking like a born-again progressive doesn’t make real change happen, even if it puts the GOP on the defensive and rallies the base until Hillary makes her entrance.