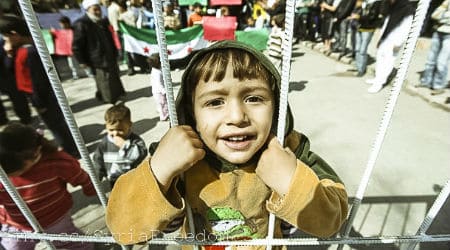 A Syrian refugee boy stands behind the fence during a protest against Syria’s President Bashar al-Assad at Yayladagi refugee camp in Hatay province on the Turkish-Syrian border. Photo: FreedomHouse @ Flickr CC 2.0

After the attacks on Paris, many politicians—including (so far) the governors of Alabama, Arkansas, Louisiana, Michigan, and Texas—have called for stopping refugee flows to the United States from the Middle East, claiming that the refugee process poses a major threat to America’s security. Here are six reasons why ending U.S. refugee resettlement is the wrong approach:

1. The Paris attackers were not refugees: Assuming that the user of a fake Syrian passport found near the body of an attacker belonged to the attacker, which isn’t clear, it appears that he may have exploited the flow of people into Europe, but he was not a refugee. He did not receive refugee designation from the United Nations or vetting from intelligence agencies. He was never approved for refugee status in any country. To become a refugee in the United States, you undergo a multi-stage vetting process and only after receiving U.N. designation by trained officers in the field. The U.S. can vet refugees prior to admission, which means we can weed out terrorists and those most likely to become involved in terrorism, accepting only the most vulnerable. Europe cannot do the same. What happened in Paris is not applicable to the U.S. refugee process.

2. U.S. refugees don’t become terrorists: The history of the U.S. refugee program demonstrates that the lengthy and extensive vetting that all refugees must undergo is an effective deterrent for terrorists. Since 1980, the U.S. has invited in millions of refugees, including hundreds of thousands from the Middle East. Not one has committed an act of terrorism in the U.S. (update for those unwilling to read the source, the Boston bombers were not refugees). Traditional law enforcement and security screening processes have a proven record of handling the threat from terrorist posing as refugees.

3. Other migration channels are easier to exploit than the U.S. refugee process: The previous point can also be made another way. Non-refugees have carried out all terrorist attacks over the past 35 years. That means they used other means to arrive in the U.S. All of the 9/11 hijackers used student or tourist visas. These visas are much easier and faster to obtain than refugee status, which takes up to two years and requires a multi-stage vetting process and U.N. referral. Refugee status is the single most difficult way to come to the U.S. It makes no sense for a terrorist to try to use the resettlement process for an attack.

4. ISIS sees Syrian refugees as traitors: According to ISIS, Syrian Muslim refugees are traitors to the radical Islamic cause. “It is correct for Muslims to leave the lands of the infidel for the lands of Islam, but not vice versa,” one ISIS videosaid in September. Here are several other examples of similar condemnation from this year. Nearly 90 percent of displaced Syrians in Turkey have no sympathy for ISIS at all, even though ISIS is fighting the person, Syrian dictator Bashar al-Assad, who most refugees see as their main enemy. Kurdish and Christian refugees see ISIS as their main foe. Some have speculated that the attacker in Paris intentionally left the fake Syrian passport near his body to help turn the West against Syrian refugees. Turning away Syrian refugees plays into ISIS’s hands.

5. Turning away allies will make us less safe: Callous disregard for the fate of refugees—our potential allies in the war against ISIS—will drive them back into the hands of the person they are fleeing: Bashar al-Assad, the hated Syrian dictator. This will lead some refugees to see ISIS as their only remaining ally and safeguard against Assad. The evidence in the academic literature is that keeping refugees penned-up in camps near the zone of conflict increases terrorism in those areas, but resettling them outside of those areas does not. During the Cold War, we used refugee resettlement to gain foreign policy assets, spies, allies, and spokesmen to refute the enemy’s propaganda. In the fight against ISIS, allies gained from aiding refugees will be as important as any weapon we have.

6. America should demonstrate moral courage: During World War II, the U.S. turned away Jews due to security concerns. We sent shiploads back to the camps because we were scared that Nazi spies could hide in their midst (which was not an entirely unfounded concern). The lesson of the Holocaust, as I noted here, is that we must deal with threats without rejecting our ethical obligations. We must  not send those fleeing persecution back to their persecutors. The definition of moral courage is to resist allowing fear to overwhelm our humanity.