GOOD MEDIA. BAD MEDIA.
Some journalists stand up to power. Others kneel. 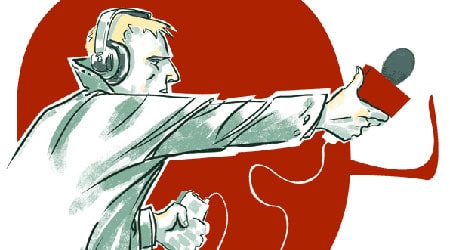 A conversation with
THEODORE L. GLASSER
Former Director of the Graduate Program in Journalism, Stanford University
Professor of Communication
Editor, The Idea of Public Journalism

Some journalists stand up to power … and pay a price  We have recently seen some dramatic examples of the punitive instincts of a powerful elite toward a media that can often embarrass them by reporting the truth.  After writing numerous articles about the Edward Snowden revelations of NSA domestic spying, journalist Glenn Greenwald came under intense personal scrutiny and attack … rather than his reporting. Greenwald’s partner was detained in London for nine hours of questioning under England’s so-called anti-terrorism laws — a clear attempt at intimidation.  New York Times reporter James Risen has been ordered to reveal his confidential sources for his book “State of War”.

Some journalists kneel to power … and reap the rewards  The question of access is always critical for reporters who cover powerful government figures.  Write a critical piece about those in power and watch the doors to further interviews be slammed shut; toe the party line and reap further insider access.  Does this explain why so many reporters simply parrot official narratives without challenge?  Is this why so many news outlets cannot bring themselves to call a coup a coup, call a dictator a dictator?

In this edition of Other Voices, we will explore what’s behind the attacks on investigative journalism, the failures of many journalists to ask the right questions or even use the right words, and, perhaps most importantly, ask what role journalism should play in a democratic society.

Our guest, Theodore (Ted) L. Glasser, is a professor of communication at Stanford University, where he is also affiliated with the Modern Thought and Literature Program. For 14 years he directed Stanford’s Graduate Program in Journalism.  Glasser’s teaching and research focuses on media practices and performance, with emphasis on questions of press responsibility and accountability.

Other Voices is a true community forum. Be a part of the studio audience.

You are an important part of every forum. For at least half the program, our audience asks the questions and drives the debate.  So come on down to the Community Media Center and be a part of this informative and always timely program.  Please arrive early. The program begins promptly at 7:00 pm.

Can’t make it to the studio? Watch live on TV or online.