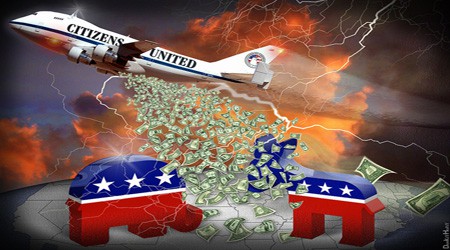 By John Nichols
The Nation

The most under-covered yet dynamic grassroots movement in the United States seeks to restore the right of citizens and their representatives to organize elections so the votes of the great mass of American citizens matter more than the dollars of billionaire campaign donors and multinational corporations.

Sixteen states have formally demanded that Congress take action to amend the US Constitution to undo the damage done by the US Supreme Court’s decisions to eliminate century old barriers to the buying of elections. Close to 600 towns, villages, cities and counties have also made the ask. During the first weeks of March in New Hampshire, forty-seven town meetings called for a constitutional amendment. In early April, thirteen Wisconsin communities voted overwhelmingly to call on their elected representatives to begin the amendment process.

The US Senate will vote this year on a proposed constitutional amendment, according to Senate Rules Committee chairman Charles Schumer, D-New York, who declared Wednesday that “TheSupreme Court is trying to take this country back to the days of the robber barons, allowing dark money to flood our elections. That needs to stop, and it needs to stop now. The only way to undo the damage the court has done is to pass [an] amendment to the Constitution, and Senate Democrats are going to try to do that.”

The announcement came as the Rules Committee was meeting to hear from former US Supreme Court Justice John Paul Stevens, who has urged consideration of an amendment “because of a very strong state interest in trying to establish equality of opportunity for competing candidates to get elected.”

Echoing the sentiments of the millions of Americans who have called for amending the Constitution, Stevens says that under the system created by the court rulings in cases such asCitizens United v Federal Election Commission and McCutcheon v Federal Election Commission, “The voter is less important than the man who provides money to the candidate.” In order to address what Stevens identifies as “a giant step in the wrong direction, an amendment is needed to allow Congress and the states to impose “reasonable limits on the amount of money that candidates for public office, or their supporters, may spend in election campaigns.”

The amendment that the Senate will take up does this by restoring the authority of Congress to regulate the raising and spending of campaign money (including independent expenditures by so-called “Super PACs”). It would, as well, renew the ability of states to regulate campaign financeat their level.

Sponsored by US Senator Tom Udall, D-New Mexico, the proposed amendment now has thirty-five co-sponsors. In addition, there are a number of senators who has sponsored other amendment proposals who could be expected to sign on. At this point, there are no Senate Republican supporters of the amendment strategy, although Congressman Walter Jones, R-North Carolina, has supported a similar amendment in the House.

There remain obstacles to securing a vote in the Senate, where Republicans have obstructed votes on numerous major issues and could be expected to erect barriers to consideration of a constitutional intervention on a matter that has long been a focus of Senate Minority Leader MitchMcConnell, R-Kentucky. And no one expects that action in the Republican-controlled House will come quickly, or easily. But the history of the constitutional amendment process reminds us that a critical turning point in any struggle to enact an amendment comes when it begins to be seriously considered by the House or Senate. With that in mind, Schumer’s announcement represents significant progress.

“With the vote, every senator will be required to take a stand: Do you side with the forces of dark money or the American people? Are you for plutocracy or democracy?” said Public Citizenpresident Robert Weissman, whose group has been active in organizing at the local and state levels on behalf of an amendment.

Organizers with Public Citizen’s “Democracy is for People” project and groups such as Free Speech for People, Move to Amend and Common Cause—organizations that have backed a variety of amendment proposals and strategies—noted Wednesday that the prospect of Senate action was likely to inspire more grassroots activism across the country. That is especially the case in states represented by Democratic senators who have not yet endorsed a constitutional response to Citizens United and McCutcheon, and in states where responsible Republicans might be pressured to at least allow a vote.

“Today marks another important milestone in the growing grassroots movement across the country to end the dominance of big money in our elections and to restore our republican democracy to the people,” said Free Speech For People president John Bonifaz, who added, “The Supreme Court has hijacked the First Amendment for the wealthy few, allowing them to drown out the voices of everyone else. We must now use our amendment power under Article V of the US Constitution to defend our democracy. We have done this before in our nation’s history. We can and we must do it again.”

Specifically, Bonifaz said the Udall amendment would “overturn the Supreme Court’s egregious rulings that have so threatened our democracy and the fundamental American promise of political equality for all.”

It would do so by adding to the Constitution language that reads:

Section 1. To advance the fundamental principle of political equality for all, and to protect the integrity of the legislative and electoral processes, Congress shall have power to regulate the raising and spending of money and in-kind equivalents with respect to Federal elections, including through setting limits on—
(1) the amount of contributions to candidates for nomination for election to, or for election to, Federal office; and
(2) the amount of funds that may be spent by, in support of, or in opposition to such candidates.

Section 2. To advance the fundamental principle of political equality for all, and to protect the integrity of the legislative and electoral processes, each State shall have power to regulate the raising and spending of money and in-kind equivalents with respect to State elections, including through setting limits on—
(1) the amount of contributions to candidates for nomination for election to, or for election to, State office; and
(2) the amount of funds that may be spent by, in support of, or in opposition to such candidates.

Section 3. Nothing in this article shall be construed to grant Congress the power to abridge the freedom of the press.

Section 4. Congress and the States shall have power to implement and enforce this article by appropriate legislation.

Udall, a former federal prosecutor and New Mexico Attorney General, says that, “James Madison argued that the US Constitution should be amended only on ‘great and extraordinary occasions’,” Udall said. “I believe we have reached one of those occasions. Our elections no longer focus on the best ideas, but the biggest bank accounts, and Americans’ right to free speech should not be determined by their net worth. I am proud to be [advancing] this amendment to change the way we do business in Washington and get money out of a broken system that puts special interest over people.”