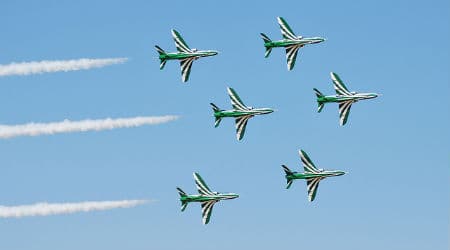 The Saudi-led military action in Yemen to stop the Houthi dominance of the entire country should surprise nobody. It captures several political dynamics that have swept the Middle East in recent years. These all revolve around the role the Saudi leadership sees for itself as a force for stability against growing threats.

Consider the new trends that the kingdom perceives as dangers: the popular uprisings in the Arab world, the failure of U.S.-led policy in Iraq, the expansion of Iranian influence in the region, an apparently imminent Iranian nuclear agreement with the P5+1 powers (the five permanent United Nations Security Council members plus Germany) and the birth and slow expansion of militant takfiri-Salafist Islamist groups such as Al-Qaeda and the Islamic State in Iraq and the Levant (ISIL).

Riyadh’s direct armed intervention mirrors several previous, mostly failed military actions in Yemen going back half a century. The most recent consisted of air and artillery attacks against Houthis in northern Yemen five years ago. The operation achieved the opposite of its intent to weaken them. But yesterday’s dramatic military offensive goes beyond this history and caps an important new development in the Gulf Cooperation Council (GCC) countries since the outbreak of the Arab uprisings four years ago. The conservative Arab oil-producing monarchies are now willing to use combined military force across the Gulf region and the rest of the Middle East and North Africa to protect their interests.

This escalation started with the Saudi-led military action in Bahrain in spring 2011 to prevent the popular uprising there from overthrowing or democratizing the monarchy. It continued with large-scale military and financial support for armed rebels in Syria and strikes against radical Islamist targets in Libya and Iraq by the air forces of several smaller GCC states. This new GCC militarism was announced with unusually explicit Saudi warnings a year ago that an American-Iranian rapprochement would cause Riyadh to take the lead in protecting what it sees as Iranian threats to its regional interests, rather than rely mainly on the U.S. for this.

Until recently the GCC leaders always preferred using proxies or massive financial diplomacy to achieve their ideological aims. Their new approach was certainly precipitated at least partly by the United States’ recent withdrawal from Iraq. The country’s chaos provided openings for two developments that have always deeply frightened the Saudis: the birth of movements like ISIL that challenge Saudi religious legitimacy and leadership of the Sunni Arab world and expansion of Iranian influence and direct military action in Iraq to help defeat ISIL and stabilize the now Shia-led country.

For years Riyadh has expressed serious concerns about expanding Iranian influence in the region, most notably in Iraq, Syria and Lebanon. This sentiment probably exaggerates actual Iranian aims, but nevertheless is deeply felt in Saudi royal circles. The specter of Iranian-backed Houthi Yemenis taking charge of the country, including a revived role by former Yemeni President Ali Abdullah Saleh, exacerbated those fears. The Saudis dreaded being surrounded by Iran and its Arab allies, sitting on oil export chokepoints at the mouths of the Red Sea and the Persian Gulf.

Since assuming the monarchy in January, Saudi Arabia’s King Salman has been floating ideas about how to lead a Sunni coalition of Arab and other regional states that would check the expansion of Iranian influence. A bonus parallel outcome of this Saudi regional initiative, in Riyadh’s view, would be to check Arab revolutionary impulses and stabilize the region under military-led conservative rulers, such as Field Marshal–turned–President Abdel Fattah El Sisi in Egypt, who are eager participants in the assault on Yemen.

The swift expansion of Houthi territorial and political control in Yemen in the last few months forced Salman to act quickly to avoid being branded a paper tiger. The Saudi-led and -financed military coalition of more than 10 Arab and Asian Muslim-majority countries that has launched attacks in Yemen is likely to perpetuate the legacy of U.S.- and European-led military campaigns in the Middle East that inevitably result in catastrophe. They leave widespread chaos and ungoverned zones in their wake, which in turn provide fertile ground for Al-Qaeda, ISIL and others of their ilk to move in and operate locally, regionally and globally.

The special danger for Saudi Arabia in Yemen is that expanded operations by Al-Qaeda and ISIL would be a huge new magnet for jihadis from around the world to gather in Yemen in order to try to overthrow their great ideological prize next door: the Saudi theological leadership of the Islamic world. It would be ironic if the Saudi-led military move to thwart the expansion of presumed Iranian-backed Houthis ended up creating a much more tangible threat to the Saudis and other GCC governments: thousands of takfiri-Salafist militants in their immediate neighborhood.

The emerging scenario of four out-of-control countries shattered by war — Iraq, Libya, Syria and Yemen — is frightening, but it may be the inevitable price the world pays for continued unchecked militarism across the region, whether led by Western or Arab powers.

Rami G. Khouri, a Jordanian-Palestinian national, is a senior public policy fellow at the Issam Fares Institute for Public Policy and International Affairs at the American University of Beirut and a senior fellow of the Harvard Kennedy School.