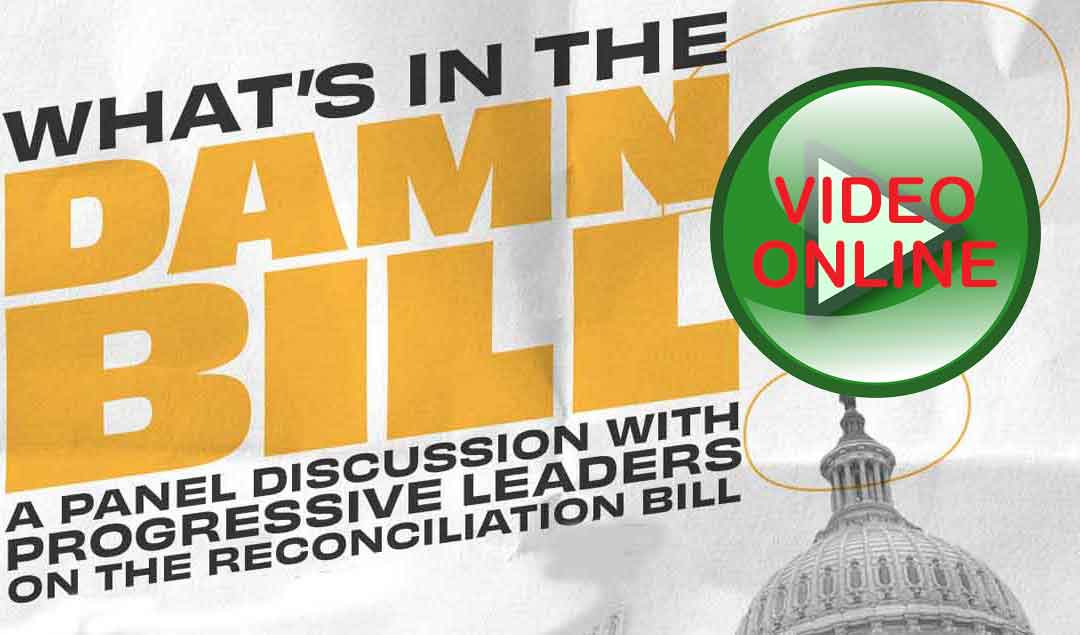 Note: Since this article was posted, the online event has taken place. Here is the video from Wednesday’s panel discussion of the “Build Back Better” bill.

The Senate Budget Committee chair will be joined by other progressive lawmakers and leaders at 8:00 pm Wednesday.

As a couple of right-wing Democrats continue to block President Joe Biden’s Build Back Better agenda despite the party’s full control of Congress, progressive lawmakers are planning to come together Wednesday evening to discuss key policy proposals for the budget reconciliation package at a livestreamed event hosted by Sen. Bernie Sanders.

Sanders (I-Vt.), who chairs the Senate Budget Committee, will be joined by the Rev. Dr. William Barber II of Repairers of the Breach and the Poor People’s Campaign, Mary Kay Henry of the Service Employees International Union (SEIU), Alex Lawson of Social Security Works, Rep. Alexandria Ocasio-Cortez (D-N.Y.), and Varshini Prakash of the Sunrise Movement.

The event—entitled “What’s in the Damn Bill: A Panel Discussion with Progressive Leaders on the Reconciliation Bill”—will be livestreamed at live.berniesanders.com and on Sanders’ social media pages at 8:00 pm ET.

TONIGHT: Polls show a majority of the American people support the policies in our reconciliation bill, but too many don’t know they’re actually in the bill! Tonight, @AOC, @RevDrBarber, @MaryKayHenry, @VarshPrakash, and @alaw202 join me to discuss. I hope you’ll join us. pic.twitter.com/t1rZXNt9wB

Progressives’ plans to publicly discuss the package come amid reports that the White House has agreed to slash the topline number to between $1.75 trillion and $1.9 trillion—down from $3.5 trillion over a decade, which was already a compromise—in a bid to win over key holdouts, particularly Sens. Joe Manchin (D-W.Va.) and Kyrsten Sinema (D-Ariz.).

While Rep. Pramila Jayapal (D-Wash.), chair of the Congressional Progressive Caucus, said Tuesday that “we feel progress is being made toward an agreement that will make transformational investments” in major priorities—specifically the care economy, climate action, housing, healthcare, and a path to citizenship for immigrants—Democrats continue to express frustration with Manchin and Sinema’s obstruction of Biden and their party’s policy goals.