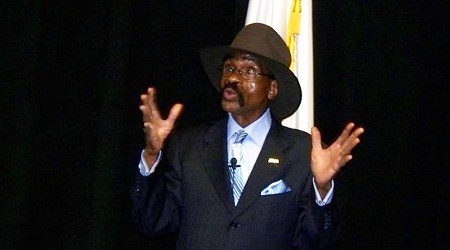 By Geoffrey Robertson
The Guardian

In the summer of 1976, I walked the mean streets of Paterson, New Jersey, with Rubin “Hurricane” Carter – and encountered the raw, bloodshot hate-gaze from the white folks who passed us by. Carter was instantly recognisable: he was as bald and black and muscley as the Michelin man.


“What chance do you give me?” he asked this then-young British lawyer, shrugging his boxer’s shoulders. “You can see my verdict in their eyes. In America, nothing has really changed.”

On the political surface, it seemed to have changed. In 1966, when Carter – then a top professional boxer – was first convicted by an all-white jury for slaying three of their kind in a local bar, the governor of Georgia was fighting desegregation with a pick-axe. Now his successor, Jimmy Carter, was on the way to the US presidency, preaching racial harmony and quoting Bob Dylan in his campaign ads. Rubin’s original 1966 conviction for an apparently motiveless triple murder was based on palpably inadequate evidence and came at a time when he was a contender for the world middleweight title.

Yet Carter was re-convicted on even weaker evidence at his retrial in 1976 and returned to prison. Not until 1985 was this wrongful reconviction overturned. His story inspired one of Dylan’s best protest songs and Norman Jewison’s fine movie, in which he was played by Denzel Washington. As a warning against possibility of convicting – and executing – the innocent because of prosecutors who play the race card and hide exculpatory evidence, the story of “the Hurricane” has a significance that will outlive his death.

It all began with the riots in Watts and Harlem in the early 1960s, which left 13 black children killed by police bullets. Rubin Carter, who until then had been marching non-violently with Martin Luther King, became a black Muslim and started to talk to the press about fighting back. That made him a public enemy in his home town of Paterson, where he had been arrested at the age of eleven for stabbing a man he said had indecently assaulted him. He was put away in a reformatory for seven years and was not forgiven – even as he began winning boxing titles.

The police officer involved in arresting him as a child, Vincent de Simone, happened to be on duty 18 years later, on a night when two black gunmen walked into the Lafayette Bar and Grill and opened fire, killing three customers before escaping in what some witnesses said was a white Chevrolet. Long after a car of that make had eluded a police chase, Carter and a young friend, John Artis, were pulled over in Carter’s white Dodge. De Simone ordered the two brought back to the bar, but no witnesses could identify them as the gunmen. Alfred Bellow and Arthur Bradley, two professional burglars who had seen the gunmen while themselves out to rob the same bar, gave descriptions which were nothing like Carter or Artis.

But de Simone was as implacable as Inspector Javert from Les Misérables. He dragged the suspects to the hospital bedside of a critically-injured survivor who denied that they were the men who had just shot him. So Carter and Artis were released.

The only physical evidence against them was a lead-plated .32 Smith and Wesson bullet, which a policeman claimed to have found in the back of Carter’s car. It could have been fired from the murder weapon – but the bullets which riddled the Lafayette victims were all plated with copper. Lead-plated .32 were not in common use … except in the Patterson police force, where they were standard issue.

Several months later, de Simone persuaded Bellow and Bradley to change their minds and identify Carter and Artis as the gunmen. In return for changing their story, the two burglars were offered a host of inducements – early parole from previous sentences, a $12,000 reward and a blind eye towards the crimes they committed on the night (Bellow had robbed the Lafayette cash register while the victims lay dying). These deals were not disclosed to the defence. The prosecution even suppressed their initial description of the gunmen as “thinly built, both 5’11’ in height” (the Hurricane was an unmistakably stocky 5’7″).

The prosecution relied on Bellow and Bradley – and unspoken racial prejudice. On the jury table, the blood-stained shirt, trousers, socks and shoes of each victim was carefully laid out. By the shirt collar was set a wedding photo and beneath the shoes was placed a picture of the bullet-ridden body on the mortuary slab. The prosecutor called for the defendants to be sent to the electric chair.

I met Rubin Carter during his release on bail in 1976. He had, quite literally, written his way out of life imprisonment with a memoir, The 16th Round, which revived interest in his case. Selwyn Raab of the New York Times cracked Bellow and Bradley, who confessed to perjury. Bob Dylan, who years before had so movingly mourned the lonesome death of Hattie Carroll, now set the story of “the Hurricane” to a driving, angry beat. Mohammed Ali led protest marches, and an appeals court ordered a retrial.

But the “free Hurricane Carter” campaign outraged the local police department, of which de Simone was by then chief – as well as the judges and politicians of New Jersey. It became a matter of honour to secure Carter’s reconviction. The state devoted massive resources to the prosecution: I counted no less than 49 of their lawyers and investigators, ranged against a handful of Carter defenders working for the most part without fee. The state had the money and now it invented a motive by claiming the Lafayette attack was a Black Power revenge killing.

The trial judge permitted this preposterous change of tack. At the pre-trial hearings I attended, he seemed to loathe the out-of-town defence lawyers and, after he allowed the prosecution to play the race card, the feeling was mutual. “What sort of lousy judge would make a ruling like that?” protested the “movement” lawyer Lenny Weinglass (deploying a style of advocacy I made a mental note to avoid when back at the Old Bailey).

Outside court, I observed the downside of press freedom, American-style. The local press were determined to prejudice the trial: in its lead-up, I noted 17 editorials and 320 front page articles in local papers, all hostile to Carter. Half the articles contained inflammatory descriptions, referring to him as a “murderer,” “assassin,” “criminal” and “killer of white people.”

The result was predicable. The prosecutor relied on the new “Black Power” reprisal theory and on attacking the “Madison Avenue Hucksters” like Rabb and Dylan and the New York Times, whose campaign had provoked this supposedly unnecessary exercise. The verdict, once again, was guilty.

So, “the Hurricane” hunkered down for another life term. His release in 1985 was due to a dogged defence lawyer, Myron Beldock, who found the “smoking gun” evidence of prosecutorial misconduct. The judge quashed the conviction on the ground of that misconduct and “the prosecutor”s appeal to racism rather than reason.” The real hero of the story was John Artis, who had fatefully offered to drive Carter home on the night of the Lafayette murders. In 1966, he was 19, with an exemplary record and a good career ahead of him. Instead, he wasted the next 20 years in prison. From the outset, the prosecution had offered him plea bargains and freedom deals if only he would implicate Carter. His refusal to do so, especially when threatened with the electric chair, was truly courageous.

“The Hurricane” devoted the rest of his life to projects that secured the release of innocent prisoners and campaigned powerfully against the death penalty – he was, after all, the living embodiment of the argument. He died over Easter in the presence of John Artis, the friend who lost two decades of his own life as punishment for refusing to help the New Jersey police to send Rubin to the electric chair.