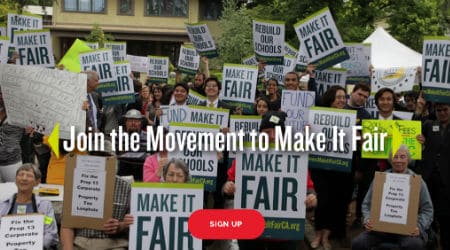 Corporate welfare is often camouflaged in taxes that seem neutral on their face but give windfalls to big entrenched corporations at the expense of average people and small businesses.

Take a look at commercial property taxes in California, for example.

In 1978 California voters passed Proposition 13 – which began to assess property for tax purposes at its price when it was bought, rather than its current market price.

This has protected homeowners and renters. But it’s also given a quiet windfall to entrenched corporate owners of commercial property.

Corporations don’t need this protection. They’re in the real economy. They’re supposed to compete on a level playing field with new companies whose property taxes are based on current market prices.

First, it’s shifted more of the property tax on to California homeowners.

That’s unfair and it’s bad for the economy because California needs new and expanding businesses.

Today, almost half of all commercial properties in California pay their fair share of property taxes, but they’re hobbled by those that don’t.

This loophole must be closed. All corporations should be paying commercial property taxes based on current market prices.

The giant corporations that are currently exploiting the loophole for their own profits obviously don’t want it closed, so they’re trying to scare people by saying closing it will cause businesses to leave California.

That’s baloney. Leveling the playing field for all businesses will make the California economy more efficient, and help new and expanding businesses.

Besides, California’s property taxes are already much lower than the national average. So even if corporations pay their full share, they’re still getting a great deal.

Right now, a grassroots movement is growing of Californians determined to reform this broken commercial property tax system, and who know California needs more stable funding for its schools, libraries, roads, and communities.