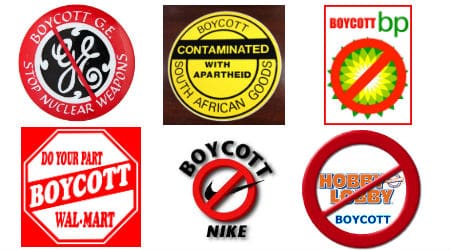 I’ve never been keen on boycotts. The one against Italy for invading Abyssinia didn’t work. Nor did the arms blockade on Spain. I’m still not sure that boycotting South Africa really brought down apartheid. I rather suspect that the old racists simply realised they were hopelessly outnumbered by the blacks of South Africa and that the game was up.

And I’m still unconvinced that boycotting Israel, even though it frightens the  right-wing crazies in Benjamin Netanyahu’s government, will achieve a two-state solution, human rights for Palestinians, etc. I’m free to refuse to buy products from Jewish colonies in occupied Arab land (I do not buy them), but, when I visit Israel, I stay at the King David Hotel in west Jerusalem, visit the Tel Aviv gallery of art and buy Israeli-published books. Some Israeli academics support a boycott of their own country. They may be right in doing so.

But in Canada – and I had to literally rub my eyes when I read this – the totally pro-Israeli Conservative government of Stephen Harper intends to list the boycotting of Israel as a “hate crime”. This is not only ludicrous, stupid, pointless and racist because it assumes that anyone opposed to Israel’s vicious and iniquitous policies of land-grabbing in the West Bank is an anti-Semite, but it is also  anti-democratic. Those who believe in non-violence have always espoused boycott movements on the grounds that economic pressure rather than bombs is a moral way of putting pressure on a country that violates international law.

Yet Harper, who would surely be elected to the Knesset if he were an Israeli, went so far as to suggest on a recent visit to Jerusalem that merely to criticise Israel can be a form of anti-Semitism. The newly retired Canadian Foreign minister John Baird (normally a fairly sane guy) has described Canada’s Boycott Israel movement as “the new face of anti-Semitism”. In January, he actually signed an official agreement with Israel to fight the Boycott Israel organisation, known locally as the BDS (Boycott, Divest and Sanction) group. Steven Blaney, who rejoices in the title of Canada’s “Minister of Public Safety”, says that boycotts of Israel cannot be separated from anti-Semitic hate speech and the recent attacks against Jews in France.

This is preposterous. If I decline to buy Israeli-produced oranges at a British supermarket, this doesn’t make me a Nazi murderer. To criticise Israel doesn’t turn Canadians into Jew-haters. A number of liberal Jewish groups have protested against Harper’s proposed new law – far too many Jewish organisations have praised it – on the grounds that it assumes that all Jews support Israel or approve of its actions. And since Jews are also members of boycott-Israel groups, Harper’s Comic Cuts new law would have to put Jews on trial in Canada for anti-Semitism.

Cloaked as usual in the kind of Blairite (and Cameronite) clichés that all law-and-order politicians adopt, Canadians are told that their government will show “zero tolerance” towards groups advocating a boycott of Israel. Of course, we show “zero tolerance” on the streets towards theft, mugging and gangland thuggery. But “zero tolerance” against those who wish to boycott a nation whose army slaughtered more than 2,000 Palestinians in Gaza last year, more than half of them civilians? Really? It was significant, I thought, that, after the killing of a Canadian soldier outside the Ottawa parliament by a Muslim last year and a murderous attack on Canadian servicemen, Harper publicised the message of condolence he had received from Netanyahu, as if the commiserations of a man who ordered the bombardment of Gaza were something to be proud of.

The dark little catch in all this is that last year Canada changed its definition of hate speech to include statements made against “national origin”, not just race and religion. Thus statements or speeches critical of Israel – like a number of public lectures I have given in Canada – may now be classed as statements against Jews (even though Jews are often among the organisers of my own speaking engagements in America). And, in due course, editorials in papers such as the Toronto Star can be deemed anti-Semitic and thus worthy of being denounced as a “hate-crime”.

If Canada’s parliament is dumb enough to pass this new law, it will put a lot of civil society groups under the cosh. The United Church of Canada and Canadian Quakers could find themselves in court and judges, however much they personally recoiled from Israel’s abuse of Palestinians, would have to abide by this outrageous piece of legislation and exercise “zero tolerance” against the free speech of those who condemn war crimes by Israel in the Middle East.

It is worth remembering that tens of thousands of Jews throughout the world, and especially in America and Poland, called for a boycott of Nazi Germany in 1933 for the veryanti-Semitic acts that led directly to the Holocaust. American diplomats were critical, lest it provoked Hitler to even crueller deeds. But they didn’t threaten the protesters with “zero tolerance” of “hate crimes” because of the “national origin” of the Germans they proposed to boycott.

In the end, of course, it’s quite simple. Boycotting a state for its crimes is a non-violent but potentially powerful way to express moral outrage at a time when political statements – or cowardly governments like that of Stephen Harper – fail to represent the anger of voters or have any effect on a state that ignores international law. If you take that away, then the Boston bomber, now facing the execution chamber, can say that his was the only way.