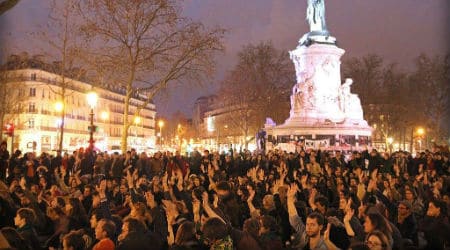 A police crackdown will not deter France’s burgeoning Nuit Debout (or “rise up at night”) movement that has swept across the country in recent weeks as the unifying call for change sparked protests in over 50 cities this weekend.

Riot police early Monday cleared the encampment in the Place de la Republique in central Paris after 11 nights of protest, but demonstrators have vowed to maintain their nightly vigil.

Demonstrations this weekend were held in as many as 60 cities and towns across France as well as in Belgium, Germany, and Spain, according to reports, as an estimated 120,000 protested against austerity, globalization, increasing inequality, privatization, and the continent’s severe anti-migrant policies.

This is what democracy looks like! Thousands in the general assembly #NuitDebout #paris discussing social justice. pic.twitter.com/yHPS0Mn9qH

What began as a rebuke of the state’s anti-labor policies has grown into a nation-wide pro-democracy movement that has been likened to the Indignados movement in Spain, or theOccupy protests in the United States.

Reporting on the movement’s origins, the Guardian‘s Angelique Chrisafis writes from Paris:

It began on 31 March with a night-time sit-in in Paris after the latest street demonstrations by students and unions critical of President François Hollande’s proposed changes to labour laws. But the movement and its radical nocturnal action had been dreamed up months earlier at a Paris meeting of leftwing activists.

“There were about 300 or 400 of us at a public meeting in February and we were wondering how can we really scare the government? We had an idea: at the next big street protest, we simply wouldn’t go home,” said Michel, 60, a former delivery driver. Protesters debate issues such as national security, housing and proposed changes to French labour law.

“On 31 March, at the time of the labour law protests, that’s what happened. There was torrential rain, but still everyone came back here to the square. Then at 9pm, the rain stopped and we stayed. We came back the next day and as we keep coming back every night, it has scared the government because it’s impossible to define.

“There’s something here that I’ve never seen before in France – all these people converge here each night of their own accord to talk and debate ideas – from housing to the universal wages, refugees, any topic they like. No one has told them to, no unions are pushing them on – they’re coming of their own accord.”

In a bid to appease the predominantly youth protesters, the French government on Monday announced €400-500 million in new student aid in the form of “subsidies for young graduates looking for a job and other aid for apprentices and students,” Reuters reports.

But that may not be enough as another protest has been announced for Monday evening.

For months, ideological tensions have been on the brink of combustion across France and greater Europe, particularly in response to the European Union’s unpopular austerityeconomics and, more recently, the anti-migrant policies that have taken hold amid the larger crackdown on rights following the bombings in Brussels and Paris.

Indeed, a statement issued by the Nuit Debout public assemblies reads in part:

Our mobilization was initially aimed at protesting against the French Labour Law. This reform is not an isolated case, since it comes as a new piece in the austerity measures which already affected our European neighbors and which will have the same effects as the Italian Job Acts or the Reforma Laboral in Spain. This concretely means more layoffs, more precarity, growing inequalities and the shaping of private interests. We refuse to suffer this shock strategy, notably imposed in the context of an authoritarian state of emergency.

…This movement was not born and will not die in Paris. From the Arab Spring to the 15M Movement, from Tahrir Square to Gezi park, Republic square and the plenty of other places occupied tonight in France are depicting the same angers, the same hopes and the same conviction: the need for a new society, where Democracy, Dignity and Liberty would not be hollow shells.

“This movement is yours too,” the call for solidarity concludes. “It has no limit, no border and it belongs to all of those who wish to be part of it. We are thousands, but we can be millions.”