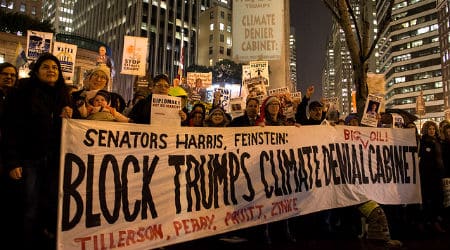 by Billl McKibben
The Guardian

In one of the futile demonstrations that marked the run-up to the Iraq war, I saw a woman with a sign that read “How Did Our Oil End Up Under Their Sand?” In nine words she managed to sum up a great deal of American foreign policy, back at least as far as the 1953 coup that overthrew Mossadegh in Iran and helped toss the Middle East into its still-boiling cauldron.

If the Senate approves Rex Tillerson after his testimony on Wednesday, they’ll be continuing in that inglorious tradition – in fact, they’ll be taking it to a new height, and cutting out the diplomats who have traditionally played the middleman role.

Rex Tillerson – who has literally spent his entire working life at Exxon – is big oil personified. It’s like appointing Ronald McDonald to run the agriculture department (which is certainly a possibility, since that job is still unfilled).

So in one sense Tillerson’s appointment simply makes formal what has long been clear. But in another way, his announcement is truly novel: the honor (secretaries of state are usually considered the second-most important official in our government) comes after a season of disgrace at the world’s largest oil company, in a moment when the energy business is on the ropes and when its product is causing the greatest crisis the planet has yet faced.

READ THE FULL ARTICLE AT THE GUARDIAN