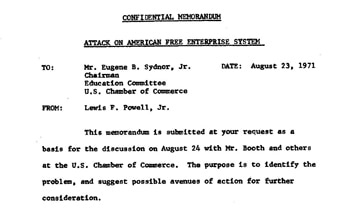 The beginning of the 1971 memo by Lewis Powell titled “Attack on American Free Enterprise System,”

The ruling elites, terrified by the mobilization of the left in the 1960s, or by what [political scientist] Samuel P. Huntingtoncalled America’s “excess of democracy,” built counter-institutions to delegitimize and marginalize critics of corporate capitalism and imperialism. They bought the allegiances of the two main political parties. They imposed … obedience to the neoliberal ideology within academia and the press. This campaign, laid out by Lewis Powellin his 1971 memorandum titled “Attack on American Free Enterprise System,” was the blueprint for the creeping corporate coup d’état that 45 years later is complete.

This coup also destroyed the credibility of liberal democracy. Self-identified liberals such as the Clintons and Barack Obama mouthed the words of liberal democratic values while making war on these values in the service of corporate power. The revolt we see rippling across the country is a revolt not only against a corporate system that has betrayed workers, but also, for many, liberal democracy itself. This is very dangerous. It will allow the radical right under a Trump administration to cement into place an Americanized fascism.

“Ignorance allied with power,” James Baldwinwrote, “is the most ferocious enemy justice can have.”

It turns out, 45 years later, that those who truly hate us for our freedoms are not the array of dehumanized enemies cooked up by the war machine—the Vietnamese, Cambodians, Afghans, Iraqis, Iranians or even the Taliban, al-Qaida and ISIS. They are the financiers, bankers, politicians, public intellectuals and pundits, lawyers, journalists and businesspeople cultivated in the elite universities and business schools who sold us the utopian dream of neoliberalism.

We are entering the twilight phase of capitalism. Wealth is no longer created by producing or manufacturing. It is created by manipulating the prices of stocks and commodities and imposing a crippling debt peonage on the public. Our casino capitalism has merged with the gambling industry. The entire system is parasitic. It is designed to prey on the desperate—young men and women burdened by student loans, underpaid workers burdened by credit card debt and mortgages, towns and cities forced to borrow to maintain municipal services.

Casino magnates such as Sheldon Adelson and hedge fund managers such as Robert Mercer add nothing of value to society. They do not generate money but instead redistribute it upwards to the 1 percent. They use lobbyists and campaign contributions to built monopolies—this is how the drug company Mylan raised the price of an “EpiPen,” used to treat allergy reactions, from $57 in 2007 to about $500—and to rewrite laws and regulations. They have given themselves the legal power to carry out a tax boycott, loot the U.S. Treasury, close factories and send the jobs overseas, gut social service programs and impose austerity. They have, at the same time, militarized our police, built the most sophisticated security and surveillance apparatus in human history and used judicial fiat to strip us of our civil liberties. They are ready should we rise up in defiance.

These mandarins are, if we speak in the language of God and country, traitors. They are parasites. Financial speculation in 17th-century England was a crime. Speculators were hanged. The heads of most of [today’s] banks and hedge funds and the executives of large corporations, such as Walmart and Gap, that run sweatshop death traps for impoverished workers overseas deserve prison far more than most of the poor students of color I teach within the prison system, people who never had a fair trial or a chance in life.

When a tiny cabal seizes power—monarchist, communist, fascist or corporate—it creates a mafia economy and a mafia state. Donald Trump is not an anomaly. He is the grotesque visage of a collapsed democracy. Trump and his coterie of billionaires, generals, half-wits, Christian fascists, criminals, racists and deviants play the role of the Snopes clan in some of William Faulkner’s novels. The Snopeses filled the power vacuum of the decayed South and ruthlessly seized control from the degenerated, former slave-holding aristocratic elites. Flem Snopes and his extended family—which includes a killer, a pedophile, a bigamist, an arsonist, a mentally disabled man who copulates with a cow, and a relative who sells tickets to witness the bestiality—are fictional representations of the scum now elevated to the highest level of the federal government. They embody the moral rot unleashed by unfettered capitalism.

“The usual reference to ‘amorality,’ while accurate, is not sufficiently distinctive and by itself does not allow us to place them, as they should be placed, in a historical moment,” the critic Irving Howe wrote of the Snopeses. “Perhaps the most important thing to be said is that they are what comes afterwards: the creatures that emerge from the devastation, with the slime still upon their lips.”

“Let a world collapse, in the South or Russia, and there appear figures of coarse ambition driving their way up from beneath the social bottom, men to whom moral claims are not so much absurd as incomprehensible, sons of bushwhackers or muzhiks drifting in from nowhere and taking over through the sheer outrageousness of their monolithic force,” Howe wrote. “They become presidents of local banks and chairmen of party regional committees, and later, a trifle slicked up, they muscle their way into Congress or the Politburo. Scavengers without inhibition, they need not believe in the crumbling official code of their society; they need only learn to mimic its sounds.”

What comes next, history has shown, will not be pleasant. A corrupt and inept ruling elite, backed by the organs of state security and law enforcement, will unleash a naked kleptocracy. Workers will become serfs. The most benign dissent will be criminalized. The ravaging of the ecosystem propels us towards extinction. Hate talk will call for attacks against Muslims, undocumented workers, African-Americans, feminists, intellectuals, artists and dissidents, all of whom will be scapegoated for the country’s stagnation. Magical thinking will dominate our airwaves and be taught in our public schools. Art and culture will be degraded to nationalist kitsch. All the cultural and intellectual disciplines that allow us to view the world from the perspective of the other, that foster empathy, understanding and compassion, will be replaced by a grotesque and cruel hypermasculinity and hypermilitarism. Those in power will validate racism, bigotry, misogyny and homophobia.

Our only hope now is an unwavering noncooperation with the systems of corporate control. We must rebuild … democratic institutions from the ground up. We must not be seduced into trusting the power elites, including the Democratic Party, whose seven leading candidates to be the next chair of the Democratic National Committee demonstrated the other night at George Washington University that they have no interest in defying corporate power or backing democratic populism. We must also acknowledge our own failures on the left, our elitism, arrogance and refusal to root our politics locally in our communities. Rosa Luxemburg understood that unless we first address the most pressing economic and physical needs of the destitute we will never gain credibility or build a resistance movement. Revolt, she said, is achieved only by building genuine relationships, including with people who do not think like us. Revolt surges up from below, exemplified by the water protectors at Standing Rock.

Politics is a game of fear. Those who do not have the ability to make power elites afraid do not succeed. The movements that opened up the democratic space in America—the abolitionists, suffragists, labor movement, communists, socialists, anarchists and civil rights and labor movements—developed a critical mass and militancy that forced the centers of power to respond. The platitudes about justice, equality and democracy are just that. Only when power is threatened does it react. Appealing to its better nature is useless. It doesn’t have one.

We once had within our capitalist democracy liberal institutions—the press, labor unions, third parties, civic and church groups, public broadcasting, well-funded public universities and a liberal wing of the Democratic Party—that were capable of responding to outside pressure from movements. They did so imperfectly. They provided only enough reforms to save the capitalist system from widespread unrest or, with the breakdown of capitalism in the 1930s, from revolution. They never addressed white supremacy and institutional racism or the cruelty that is endemic to capitalism. But they had the ability to ameliorate the suffering of working men and women. This safety valve no longer works. When reform becomes impossible, revolution becomes inevitable.

The days ahead will be dark and frightening. But as Immanuel Kant reminded us, “if justice perishes, human life on earth has lost its meaning.” We fight for the sacred. We fight for life. It is a fight we must not lose. To be a bystander is to be complicit in radical evil.

Revolt is a political necessity. It is a moral imperative. It is a defense of the sacred. It allows us to live in truth. It alone makes hope possible.

This is a transcript of a talk Chris Hedges gave at the Inaugurate the Resistance rally in Washington, D.C., on Saturday.