Michelle Chen
In These Times
http://inthesetimes.com/article/16313/return_to_lender 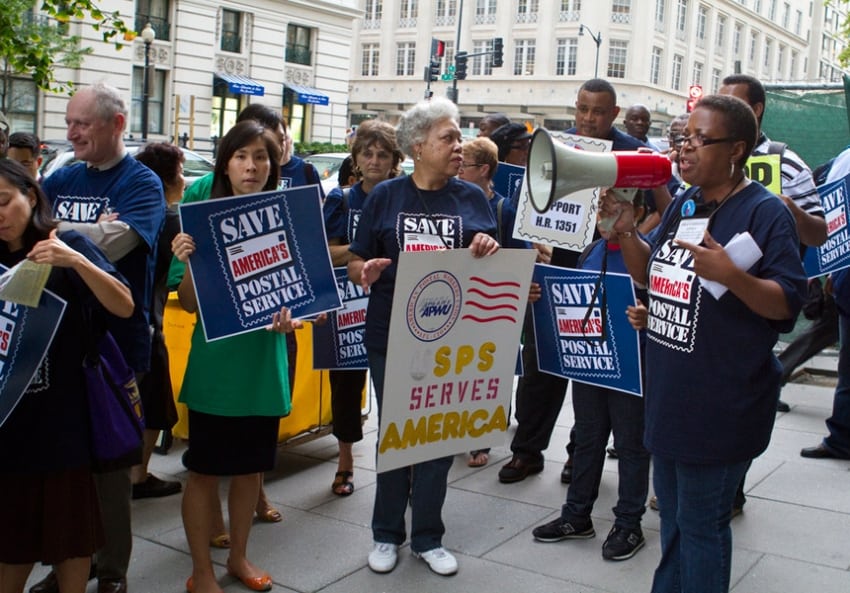 Representatives of the American Postal Workers Union, pictured here at a 2011 protest, have rallied in support of a postal banking system. (Mark Taylor / Flickr / Creative Commons)

Your friendly local post office may have an honorable history, but it’s facing tough times, including a fiscal crisis and, more generally, a struggle to keep pace with growing digital communication technologies. Conservatives have increasingly dismissed the United States Postal Service as a clunky relic of old-fashioned America, with right-wing lawmakers seeking to phase it out through service cuts and privatization. Now, some progressives are trying to save the USPS by rebranding it as a financial vehicle: a place for you to pick up your mail and deposit a paycheck in one stop.

Some officials have pitched the idea of the postal service expanding into “non-bank” financial services, carefully designed to complement rather than directly compete with Wall Street. In a recent white paper, the USPS Inspector General’s office suggested that local post offices could offer products such as international money transfers, small short-term loans, and prepaid debit cards for bills or everyday purchases. To fulfill needs unmet by big banks, these financial services would ideally be targeted toward “low-income areas like rural communities and inner cities.”

Ultimately, though, many advocates want to see the postal service be bolder and actually delve into full-scale banking services. Labor and consumer advocacy groups like AppleSeed say the USPS is excellently positioned as a government-supported, publicly accountable institution to fill a longstanding gap in the financial system by offering interest-bearing accounts and other basic banking services. In addition, branching into the affordable finance business would offer the USPS a steady revenue stream.

For free-marketers who fear the USPS would steal big banks’ customers, advocates point out that low-income groups that stand to gain the most from postal banking have already been marginalized as a bad business prospect. Some 68 million Americans are considered “underbanked”: In other words, they lack access to mainstream banks and essential services like savings accounts. “Banking desert” neighborhoods are typically full of people of color, immigrants and unemployed workers—and there may be no full-service bank in sight for them, because massive firms like Merrill Lynch do not see those areas as “profitable.”

In turn, the service gap makes communities like these easy prey for shady, profiteering non-bank financial-service companies, such as payday loan shops—which are often indirectly funded by Wall Street. Under the current banking infrastructure, according to the IG report, the average underserved household spends $2,412 each year just on interest and fees for alternative financial services.

But residents of underbanked neighborhoods do tend to have access to their local branch of a nationwide network of 35,000 postal outlets, which serve every zip code, rich or poor. And as the IG points out, the post office already provides money orders in addition to mail service.

Under a postal banking system, then, consumers could cash their paycheck with Uncle Sam instead of with a sketchy corner check-cashing joint, or get a quick loan without incurring more debt through a payday lender’s usurious fees and interest rates. A public option with a trusted name like the Postal Service would provide these struggling families a stable financial infrastructure without the risks posed by high-cost storefront financiers.

With a long historical and global track record, postal finance is actually a pretty old-fashioned notion. New Zealand and Japan have established robust, popular postal banking systems that offer similar services to the proposed plan, as Dave Dayen points out. And from 1911 to 1967, the USPS ran its own Postal Savings System, a basic financial infrastructure for small deposits that earned 2 percent interest. The system peaked in the late 1940s, with more than four million depositors holding more than $3 billion, before it was eclipsed by commercial banks that had begun offering consumers more competitive interest rates.

But now that big banks have devastated the global economy and driven millions of Americans into financial ruin, it’s a good time to resurrect postal banking as a more socially responsible alternative. The idea has already gained some attention in Washington with an official endorsement from Senator Elizabeth Warren.

The transition could also help the USPS bolster its sagging finances. “If even 10 percent of what the underserved currently spend on interest and fees instead went to more affordable offerings from the Postal Service,” the IG report states, “it could lead to some $8.9 billion in new revenue per year.”

For their part, unions support postal banking, too, as an alternative to the branch closures, diminished delivery days and job losses that conservatives have repeatedly pushed on the USPS amid its current—albeit mostly manufactured—fiscal crisis.

“The Postal Service will better serve the needs of potential customers—and the nation—because it won’t victimize customers,” says American Postal Workers Union (APWU) communications director Sally Davidow. “Traditional banks have ignored the unbanked, and payday loan operations are essentially legalized loan-sharking.” An expansion into this sector by the USPS would also serve the needs of its workforce, she tells In These Times, because the employees are “highly trained and accountable to the public,” and overall, “post offices should have longer hours and be better staffed.”

This anti-privatization sentiment has also driven the APWU to oppose pro-business reform proposals, including a controversial new pilot program to partner with Staples and effectively outsource some services to corporate store employees. Instead of potentially displacing uniformed civil servants through privatization, the union points out, the government now has the opportunity to expand that unionized workforce into a greed-soaked banking sector.

Postal-banking advocates should remain wary, however, that a venture into the banking sector could backfire by fostering more corporatization: A public-option financial vehicle could be watered down into yet another Staples-like “public-private partnership” by partnering with an existing commercial bank. Rather than leading to a socialization of mainstream finance, such a move would undermine the institution’s civic role. Any progressive postal banking plan, therefore, would need to offer services that challenge big banks, allowing it to be economically competitive enough to ward off private-sector co-optation.

A successful foray into financial services might also inspire initiatives for other forms of public service provision that fit a progressive modernization agenda. The USPS could, for example, offer online portals to facilitate citizens’ communications with various governmental agencies, such as benefits offices. A natural extension from there might be for the Postal Service to spearhead an offer of cheap broadband to residential households, especially in low-income areas where profit-minded private firms have not built sufficient local networks.

Contrary to the right-wing myth, privatization is not the only way the USPS can survive in the Information Age. Instead, the Postal Service can become a more viable business and a more vital community institution by enhancing its public role. It can challenge Wall Street by bringing economic equity to Main Street.

Michelle Chen is a contributing editor at In These Times. She is a regular contributor to the labor rights blog Working In These Times,Colorlines.com, and Pacifica’s WBAI. Her work has also appeared inCommon Dreams, Alternet, Ms. Magazine, Newsday, and her old zine,cain.