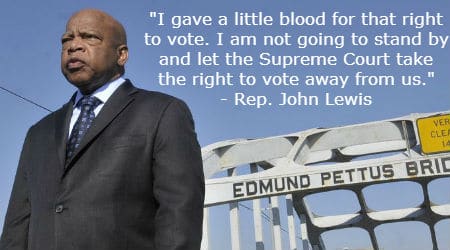 Today marks the 50th anniversary of the signing of the Voting Rights Act, the bill many historians regard as the most influential legislation passed by Congress in the last half-century. It transformed our nation by opening access to the ballot box to racial and ethnic minorities, the disabled, seniors, non-English speakers, poor and rural voters. On Aug. 6, 1965, our nation took a historic step by creating a more fair, more just democracy.

Even though the 15th Amendment, enacted after the Civil War, established that the right to vote should not be “denied or abridged,” state and local laws often nullified that mandate. The participation of millions of Americans in any part of the electoral process was rendered nearly impossible.

The journey to the passage of the Voting Rights Act, the legislation that equalized voting access, took almost 100 more years. Throughout the struggle, foot soldiers of the Civil Rights Movement were told to wait and to be satisfied with slow, incremental change. But as the Rev. Martin Luther King Jr. wrote in his “Letter From Birmingham City Jail,” the word “‘Wait’ has almost always meant ‘Never.'”

And so civil rights advocates pushed ahead with courage against enormous odds — organizing, marching, standing day after day in unmovable lines trying to register. Hundreds went to jail in nonviolent protests, some shed blood, and others even died for the precious right to vote.

The impact of the Voting Rights Act was immediate. The first year after it was signed, 302,000 Americans who previously had been denied access were registered to vote. The power of the Act was not only that it made illegal old devices designed to exclude certain eligible voters, but also that new tactics were prevented from becoming law.

Every time sections of the act came up for renewal in Congress, Democrats and Republicans jointly supported improvements to ensure that the law remained strong to protect the rights of all voters. Evidence from hearings held across the country made it clear that efforts to impede voting access had not ended, and demonstrated how the act had effectively deterred voter discrimination. That’s why the bill enjoyed bipartisan support no matter which party controlled Congress or the White House.

But two years ago, the Supreme Court gutted the Voting Rights Act. In Shelby County vs. Holder, the court nullified the provision that required states with a history of discrimination to obtain federal approval before enacting changes to voting rules. That undermined the law’s ability to stop problematic rules and statutes before they disenfranchised voters. Once a discriminatory law is enacted, the burden lies with its victims to raise money for expensive litigation and prove they are systematically disenfranchised. In the meantime, their access to the ballot box stays compromised, sometimes for years or decades.

The result of Shelby is that many state legislatures eager to neutralize the impact of minority voters are no longer constrained. On the very day of the Shelby decision, Texas implemented a strict voter ID law that had previously been declared discriminatory by the Justice Department. (A federal circuit court found it in violation of the Voting Rights Act Wednesday.) Georgia cut its number of early voting days in half. Florida made it more difficult to run voter registration drives. North Carolina eliminated same-day registration, ended preregistration for 16- and 17-year-olds and enacted photo ID requirements. The Brennan Center reports that this year alone, 33 states across the country, from Nevada to Maine, introduced legislation to restrict the right to vote.

In the Shelby decision, Chief Justice John G. Roberts Jr. acknowledged that “voting discrimination still exists; no one doubts that.” He gutted the law, but also left the door open for Congress to find a solution to the issues raised by the court. As legislators, we must see the changes to voting rights sweeping the land as a call to action.

That is why we introduced the Voting Rights Advancement Act, which would restore the vital protections lost in the Shelby decision. On this 50th anniversary, rather than pay tribute to the act’s original passage, we must fight for its restoration.

Democracy is not a state. It is an act, and each generation must do its part to move this nation toward a more perfect union. There is no power more fundamental to democracy than the right to vote.

Rep. John Lewis (D-Ga.) was a leader in the civil rights movement and has been a member of Congress since 1987. Sen. Patrick Leahy (D-Vt.) is ranking member on the Senate Judiciary Committee.