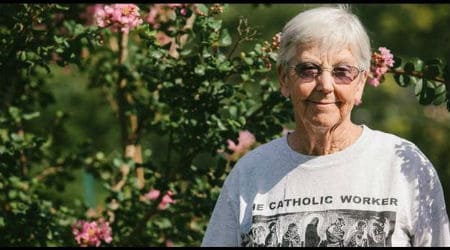 Megan Rice, an 85-year-old nun who broke into the Y-12 National Security Complex in Oak Ridge, Tennessee, in 2012, along with fellow anti-nuclear activists Michael Walli and Gregory Boertje-Obed, was charged with sabotage and damaging federal property and spent about two years in federal prison. They were released on May 16 after the 6th U.S. Circuit Court of Appeals overturned their sabotage convictions while upholding their convictions for the less serious crime of injury to government property and ordering the original court to resentence them on the lesser crime. They don’t regret their actions, and remain devoted to their cause. “We accomplished what we set out to do.” Walli said. In an interview with Al Jazeera America in Queens, New York, on June 3, Rice reflects on her work.

What did a typical day in prison look like?

I would start with my own personal meditation time, as of 4 a.m. in the morning. I would be free and everybody would still be asleep. Breakfast would begin to be served between 6:30 and 7a.m. I joined everybody for that. Not too many wanted to go to that breakfast, they would sleep through it. It was very quiet at that time. Some people, very few, would be ready to go to a job, mostly in laundry. Some would go and clean. There weren’t enough jobs.

Did you have a job?

No, nobody ever asked me to.

What did you do?

I was writing letters, mostly, or reading, or composing, or reading the excellent articles that people would send, which was part of reading the letters, and responding. And it was possible to email from there. That was the only thing, we couldn’t be on the Internet, but we could receive and send emails. I was also meeting up with people, wanting to talk about personal problems, spiritual matters or their cases.

We don’t use the word “break in” because we didn’t break in. We entered the Y-12 facility, legally. And I’d just like to make the statement that all citizens are required to expose and oppose known crimes, equally responsible, according to their ability, and according to their situation. And we had known well of the crime of nuclear weapons, and we knew what was happening at Y-12, so we entered Y-12 through illegal fences, built for an illegal project, and therefore we had to enter in the way we could, others might enter through various other ways, but we found ourselves unable and we had waited so many years to do this, not consciously knowing but feeling it should be done. So we easily entered the base, in a very simple way, taking no time to cut a little slit that was very neat and to crawl through uninhibited, the four fences, the last three in about 15 minutes.

So when you entered that facility, and you got arrested, what went through your mind?

Thank goodness, we’re able to expose and oppose a known crime, in a very short period of time, in the most comprehensive way, that we could think about, which was using symbols, we labeled the building, and we suggested the effects of this building.

How do you look back on your action?

With great satisfaction. We did what we had planned to do, and we never dreamed we could ever do that.

What has resulted from that?

Well, obviously, it was misinterpreted as revealing a breach in the security system. And it is the breach of the security of the planet itself, so they’ve just attributed their crime to us.

What happens next? For you, for the anti-nuclear cause?

I’m not any more involved in this than any other human being in the world, I just happen to be able to at this point to be consciously involved in it because I’m not having children or grandchildren, being in a retired state, and yet having very good health.

But you’ll continue your activism?

Certainly, as long as I live. As long as it exists it’s going to be a focus, as it is for everybody.

What would you tell nuclear non-proliferation negotiators?

I think it could only be this: Let’s get down to brass tacks and just ban nuclear weapons, as many nations, I think 103, have decided to do. … If nobody had them nobody would want them. Nobody would need them.

Most people in the U.S. aren’t worried about nuclear proliferation on a daily basis.

Many people don’t even know we continue in this, unless there is the proper reporting. But the mainstream press in the U.S. had not even reported that it was happening.

What would you tell them?

Stop being under the control of the military industrial complex, corporate entities that profiteer from the plans at a false need for security or a false pursuit of security, for the sake of profiteering only. So let us transform these industries into that which is enhancing life and not destroying life. And it’s very possible. It would be far more profitable for everybody, not just the corporate elites.

How do you and your community plan to take that message forward?

We haven’t planned specifically [laughs], we’re going to continue, carry on what we’re doing, we’re writing newsletters, we focus on this, if we’re calling up people, say, how are you praying about the ban on nuclear weapons, comprehensive ban on nuclear weapons? Just spreading and planting seeds in people’s minds that this is possible, according to each one’s gifts.

What should have gone better in the Non-Proliferation Treaty negotiations?

There is always the effort of the major powers the U.S., Britain, France, the major nuclear powers, the Soviet Union, to hang on to the profiteering that this is providing, not to countries, but to international corporations that are profiteering off the manufacture of nuclear weapons. The rest of the world is being impoverished and polluted, actively destroyed as long as we keep this up, and don’t actively try to decontaminate and demilitarize, dismantle in a way that people get their just wages and they don’t all go into the top, less than one percent that hold the world’s economy.

What is your opinion on the political debate over lifting sanctions on Iran?

The U.S. has always had to have a Goliath created because it has played the role of Goliath, and to distract it from its superpower drive, it has to have somebody it’s defending itself against. Iran is just one of those, I would say, that has been selected, and of course the oil competition between the two countries has gone back to the turn of the century. But it’s Middle Eastern oil, not U.S. oil. Iranians are just like Americans, human beings, and they’ve been maligned. I’ve met many, many; they’re not too happy with the way some of their leaders are, but we’re not happy with the way some of our leaders are.

This interview has been edited for length and clarity.