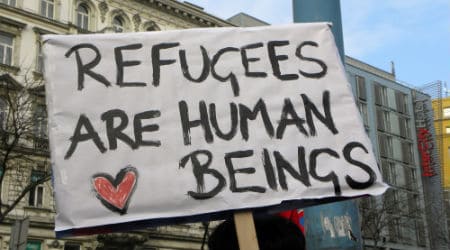 Peter, a Sierra Leone migrant living in Hungary, is one of the lucky ones. He has a job. He has a supportive community of friends. After seven years in the country, the Hungarian government approved his application for asylum. He started a very successful NGO devoted to helping other migrants make a new life in Hungary.

I interviewed Peter in Budapest two years ago. It was not exactly the best of times to be a migrant or someone working on migrant issues in Hungary. The right-wing government of Viktor Orban and his Fidesz party had turned a cold shoulder to the influx of newcomers from the global south. Two migrant rights organizers I interviewed at the time refused to allow me to publish our conversation for fear of government reprisals.

Little did we know that the situation two years ago was halcyon compared to today.

Hungary is the epicenter of a new wave of migration hitting Europe. In 2011, about 7,000 migrants arrived in Hungary. Now the country is experiencing as many as 3,000 per day.

It’s no surprise, then, that Hungary has become even less hospitable to these new arrivals, most of whom are heading north from the Middle East through Greece and then Macedonia and Serbia. This year, the Hungarian government has granted asylum to only 278 of the 148,000 people who applied. And Fortress Hungary is constructing a new 109-mile fence across its southern flank to dissuade others from arriving.

Most of the migrants who make it to Hungary, unlike Peter, see it as just a stop on the way to more welcoming countries, like Germany. But it’s not easy to complete that journey. Smugglers charge exorbitant rates. And the trip can be just as dangerous by land as on the rickety boats that routinely capsize in the Mediterranean.

On the road between Budapest and Vienna, a truck was discovered last week with 71 corpses rotting in the back. These unfortunates, hoping for a new life in Austria, suffocated in unspeakable conditions and then were abandoned by their Bulgarian and Afghan smugglers. They’d already made it on the first leg of their journey — out of their country and into southeastern Europe — and they were hopeful that the final leg would bring them from amigrant-processing center somewhere in the European Union to an apartment, a job, and a life of safety.

But these middle passages are often the most treacherous.

A Crescent of Crisis

During the slave trade, which forcibly transferred 12.4 million Africans from their homeland between the late 15th and 19th centuries, as many as 1.8 million died during the infamous “middle passage” to Europe and the Americas — a casualty rate of around 15 percent.

The conditions on the slave ships were horrifying. People were stacked practically like firewood, and many died of malnutrition and dehydration. Sharks followed the ships to feed off all the bodies thrown over the side. “Human ‘wastage’ was simply part of the business, something to be calculated into all planning,” writes Marcus Rediker in his book The Slave Ship.

Today’s migrants are not slaves. They’re coming to Europe voluntarily. Indeed, they’re desperate to leave their homelands and find even the lowest-paying jobs in Europe. The countries they’re abandoning — Syria, Afghanistan, Mali — have become death traps, so they’re willing to risk everything to bring themselves and their families to safety.

But between the horrors of their home countries and the security of Europe lies a middle passage that all too often resembles the terrible transit experienced by enslaved Africans long ago. More than 2,300 people have died so far this year trying to cross the Mediterranean. Over 3,200 died last year.

Meanwhile, the number of people trying to get across by boat from Africa to Europe hasjumped 40 percent since 2014. The casualty rate is lower than during the slave trade — approximately 1 percent versus 15 percent — but this comparison should not make Europeans sleep any better at night.

In 2014, 307 people died trying to get from Mexico into the United States (down from 445 in 2013). Since 2000, the International Organization for Migration (IOM) estimates that 40,000 people have died trying to cross borders around the world. “The true number of fatalities is likely to be higher, as many deaths occur in remote regions of the world and are never recorded,” according to the 2014 IOM report Fatal Journeys. “Some experts have suggested that for every dead body discovered, there are at least two others that are never recovered.”

No doubt the smugglers responsible for many of these deaths also calculated “human wastage” as part of their business.

Since Europe is the closest safe haven for people trapped in a crescent of crisis, which stretches from Ukraine through Afghanistan to Iraq and Syria and into northern Africa, it must deal with the surge in migration. Eliminating the push factor by ending the civil conflicts in the crescent of crisis is the only sustainable solution to the current migration problem. But Europe can’t wave a magic wand to make Afghanistan, Syria, and Eritrea into safe and stable countries.

As an interim measure, then, Europe must find a way of reducing the horrors of the middle passage as well as providing a safe haven at the end of the journey.

Europe wasn’t always such a stable, peaceable place. During the Fascist takeover of the continent in the 1930s, large numbers of Europeans were fleeing certain death in Germany and Austria. In 1938, 32 nations met in Evian, Switzerland to discuss the growing refugee crisis.

“The outcome of the meeting was clear: Europe, North America, and Australia would not accept significant numbers of these refugees,” writes UN High Commissioner for Human Rights Zeid Ra’ad Al Hussein. “In the verbatim record, two words were uttered repeatedly: ‘density’ and ‘saturation.’ The European countries were already beset with population ‘density’ and had reached a point of ‘saturation’ — in other words, there was simply no more room at the European inn.”

The world’s nations will again meet to discuss a large-scale refugee problem, this time in New York at the United Nations, in an emergency session convened by Ban Ki-moon for later this month. EU ministers will gather two weeks before that to work out their own strategy. The early signs suggest a replay of Evian 1938. As I wrote earlier in Our Refugee World, rich countries have simply not stepped up to the plate.

Germany is the major exception. Here is a country, at least, attempting to learn the lessons of its own history. Chancellor Angela Merkel recently decided to allow thousands of Syrian refugees to apply for asylum in Germany. The country now expects to take in 800,000 refugeesthis year, four times the figure from 2014.

German Foreign Minister Frank-Walter Steinmeier and Economic Affairs and Energy Minister Sigmar Gabriel write that “the response so far does not meet the standards that Europe must set for itself. The EU cannot put this off any longer — we need to act now. We must therefore pursue a European asylum, refugee, and migration policy that is founded on the principle of solidarity and our shared values of humanity.”

Their 10-point plan focuses on establishing more consistent and humane Europe-wide policies, a fairer distribution of refugees, more money for countries on the front lines like Greece, and a more concerted marine rescue effort. Presumably Germany will bring this plan to the meeting of EU ministers and then to the UN.

The German plan is necessary if still insufficient. But even this modest initiative is generating backlash within Europe. “Germany’s neighbors are reluctant,” The New York Times reports. “The leaders of the Czech Republic, Slovakia, Poland, and Hungary are scheduled to meet ahead of the European Union ministers’ meeting to oppose any quotas on accepting migrants.” They too will probably talk of “density” and “saturation.”

The reluctance doesn’t just lie to the east. Britain, for instance, has taken in just 216 Syrian refugees — roughly equal to the poor showing of the United States on this issue — and Prime Minister David Cameron promises that the number won’t go above a thousand. Home Secretary Theresa May, meanwhile, even wants to cut back on legal migration from other EU states! Council of Europe Commissioner for Human Rights Nils Muižnieks writes that “in Denmark — where asylum applications have not increased significantly compared to 2014 — the parliament approved a cut in refugee benefits, with the declared intention of making the country less attractive to refugees.”

This is no time to give into the rising xenophobia and racism of the anti-immigration forces in Europe (which feeds on and into comparable sentiment in the United States). Here are three more suggestions to add to Germany’s 10-point plan.

1) Beef up law enforcement where it can be most effective. There’s no military solution to the refugee crisis, though some governments would like to call in troops to restore order. There is, however, a role for law enforcement: to break up the smuggling rings and prosecute the coyotes. These are the people in charge of the monstrous middle passage, and they have to be run out of business. Punish the ruthless opportunists, not the refugees.

2) Provide more funds to the countries even closer to the source. Turkey has taken in 1.6 million Syrians at a cost of over $4.5 billion. The EU should provide Turkey with more resources to handle the issue — along with Lebanon and Jordan and other frontline countries. This should reduce the burden on Greece, Italy, Macedonia, Serbia, and Hungary.

3) Create a Europe-wide jobs program. Europe is still struggling with high unemployment rates — around 10 percent in the EU. The exception to the rule is Germany, where the unemployment rate is under 5 percent. But Germany, as the country most opposed to deficit spending and priming the pump, should realize that high unemployment and elevated rates of immigration are a volatile mix. This is the time for Europe as a whole, led by its German bankers, to create a jobs program that can employ both new arrivals and native workers who have been out of work for months or years.

Back in Hungary, my friend Peter is doing just that. His NGO provides computer training for new migrants so they can get jobs and become productive members of Hungarian society. Think of how much more could be done if the Hungarian government, with EU funds, provided jobs to the graduates of the migrant training program — as well as all the disgruntled unemployed Hungarians who resist the arrival of anyone else from the global south.

Yes, there’s a rising tide of refugees in Europe. But with some smart policy corrections, the EU can ensure that a rising tide lifts all boats.

John Feffer is the director of Foreign Policy In Focus.