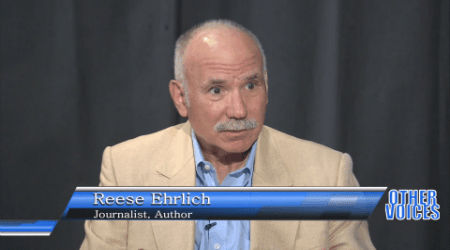 Reese Erlich during his previous appearance one year ago on Other Voices TV. A longtime journalist reporting from the world’s hotspots, Erlich is the author of Inside Syria and The Iran Agenda, among other books.

The Assad government, Russia and Iran are retaking much of the Syrian territory once controlled by rebels. The US pulled out of the nuclear deal with Iran while some in the Trump administration seek to overthrow the government and replace it with a pro-US regime. Trump and Putin talked peace in Helsinki, but civilians in the Middle East still suffer from foreign intervention.

Journalist and book author Reese Erlich returns to Other Voices TV with an up to date analysis of the volatile Middle East. Erlich is author of the forthcoming book The Iran Agenda Today: US Policy and the Middle East Crisis in a New Era.

Reese Erlich’s history in journalism goes back over 40 years. He worked as a staff writer and research editor for Ramparts, an investigative reporting magazine published in San Francisco. Today he works as a full-time print and broadcast, freelance reporter. He reports regularly for National Public Radio, ABC (Australia),and Radio Deutsche Welle. His articles appear in Vice News and Foreign Policy. His television documentaries have aired on PBS stations nationwide.

In 2012, the Society of Professional Journalists (Nor Cal) awarded Erlich a prize for best “radio explanatory journalism” for his documentary “Inside the Syrian Revolution.” His book, The Iran Agenda: The Real Story of U.S. Policy and the Middle East Crisis, has been updated and will be reissued in October.

Erlich’s book, Target Iraq: What the News Media Didn’t Tell You, co-authored with Norman Solomon, became a best seller in 2003. The Iran Agenda was published in 2007. Dateline Havana: The Real Story of US Policy and the Future of Cuba was published in 2009. Conversations with Terrorists: Middle East Leaders on Politics, Violence and Empire, was published in 2010. The paperback edition of Inside Syria: The Backstory of Their Civil War and What the World Can Expect came out in 2016.