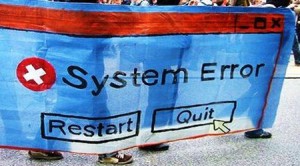 This may be the way the world ends — not with a bang but with a temper tantrum.

O.K., a temporary government shutdown — which became almost inevitable after Sunday’s House vote to provide government funding only on unacceptable conditions — wouldn’t be the end of the world. But a U.S. government default, which will happen unless Congress raises the debt ceiling soon, might cause financial catastrophe. Unfortunately, many Republicans either don’t understand this or don’t care.

Let’s talk first about the economics.

After the government shutdowns of 1995 and 1996 many observers concluded that such events, while clearly bad, aren’t catastrophes: essential services continue, and the result is a major nuisance but no lasting harm. That’s still partly true, but it’s important to note that the Clinton-era shutdowns took place against the background of a booming economy. Today we have a weak economy, with falling government spending one main cause of that weakness. A shutdown would amount to a further economic hit, which could become a big deal if the shutdown went on for a long time.

Still, a government shutdown looks benign compared with the possibility that Congress might refuse to raise the debt ceiling.

First of all, hitting the ceiling would force a huge, immediate spending cut, almost surely pushing America back into recession. Beyond that, failure to raise the ceiling would mean missed payments on existing U.S. government debt. And that might have terrifying consequences.

Why? Financial markets have long treated U.S. bonds as the ultimate safe asset; the assumption that America will always honor its debts is the bedrock on which the world financial system rests. In particular, Treasury bills — short-term U.S. bonds — are what investors demand when they want absolutely solid collateral against loans. Treasury bills are so essential for this role that in times of severe stress they sometimes pay slightly negative interest rates — that is, they’re treated as being better than cash.

Now suppose it became clear that U.S. bonds weren’t safe, that America couldn’t be counted on to honor its debts after all. Suddenly, the whole system would be disrupted. Maybe, if we were lucky, financial institutions would quickly cobble together alternative arrangements. But it looks quite possible that default would create a huge financial crisis, dwarfing the crisis set off by the failure of Lehman Brothers five years ago.

No sane political system would run this kind of risk. But we don’t have a sane political system; we have a system in which a substantial number of Republicans believe that they can force President Obama to cancel health reform by threatening a government shutdown, a debt default, or both, and in which Republican leaders who know better are afraid to level with the party’s delusional wing. For they are delusional, about both the economics and the politics.

On the economics: Republican radicals generally reject the scientific consensus on climate change; many of them reject the theory of evolution, too. So why expect them to believe expert warnings about the dangers of default? Sure enough, they don’t: the G.O.P. caucus contains a significant number of “default deniers,” who simply dismiss warnings about the dangers of failing to honor our debts.

Meanwhile, on the politics, reasonable people know that Mr. Obama can’t and won’t let himself be blackmailed in this way, and not just because health reform is his key policy legacy. After all, once he starts making concessions to people who threaten to blow up the world economy unless they get what they want, he might as well tear up the Constitution. But Republican radicals — and even some leaders — still insist that Mr. Obama will cave in to their demands.

So how does this end? The votes to fund the government and raise the debt ceiling are there, and always have been: every Democrat in the House would vote for the necessary measures, and so would enough Republicans. The problem is that G.O.P. leaders, fearing the wrath of the radicals, haven’t been willing to allow such votes. What would change their minds?

Ironically, considering who got us into our economic mess, the most plausible answer is that Wall Street will come to the rescue — that the big money will tell Republican leaders that they have to put an end to the nonsense.

But what if even the plutocrats lack the power to rein in the radicals? In that case, Mr. Obama will either let default happen or find some way of defying the blackmailers, trading a financial crisis for a constitutional crisis.

This all sounds crazy, because it is. But the craziness, ultimately, resides not in the situation but in the minds of our politicians and the people who vote for them. Default is not in our stars, but in ourselves.