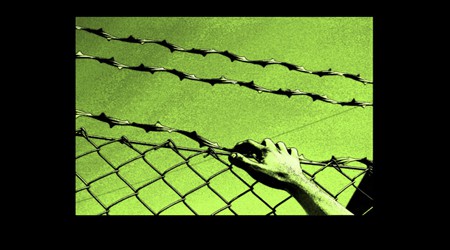 I’ve already raised the white flag. I’ve stopped searching the dictionary for the word to describe half of a boy’s missing head while his father screams “Wake up, wake up, I bought you a toy!” How did Angela Merkel, the chancellor of Greater Germany, put it? Israel’s right to defend itself.

I’m still struggling with the need to share details of the endless number of talks I’ve had with friends in Gaza, in order to document what it’s like to wait for your turn in the slaughterhouse. For example, the talk I had on Saturday morning with J. from al-Bureij refugee camp, while he was on his way to Dir al-Balah with his wife. They’re about 60-years-old. That morning, his aging mother got a phone call, and heard the recording instructing the residents of their refugee camp to leave for Dir al-Balah.

A book on Israeli military psychology should have an entire chapter devoted to this sadism, sanctimoniously disguising itself as mercy: A recorded message demanding hundreds of thousands of people leave their already targeted homes, for another place, equally dangerous, 10 kilometers away. What, I asked J., you’re leaving? “What, why?” He said, “We have a hut near the beach, with some land and cats. We’re going to feed the cats and come back. We’re going together. If the car gets blown up, we’ll die together.”

If I were wearing an analyst’s hat, I would write: In contrast to the common Israeli hasbara, Hamas isn’t forcing Gazans to remain in their homes, or to leave. It’s their decision. Where would they go? “If we’re going to die, it’s more dignified to die at home, instead of while running away,” says the downright secular J.

I’m still convinced that one sentence like this is worth a thousand analyses. But when it comes to Palestinians, most readers prefer the summaries.

I’m fed up with lying to myself – as if I could remotely, by phone, gather the information necessary to report on what the journalists located there are reporting on. Regardless, it’s information that is important to a small group of the Hebrew-speaking population. They’re looking for it on foreign news channels or websites. They do not depend on what is written here in order to hear, for example, about the short lives of Jihad (11) and Wasim (8) Shuhaibar, or their cousin Afnan (8) from the Sabra neighborhood in Gaza. Like me, they could read the reporting of Canadian journalist Jesse Rosenfeld on The Daily Beast.

“Issam Shuhaibar, the father of Jihad and Wasim, leaned on a grave next to where his children were buried, his eyes hollow, staring nowhere. His arm bore a hospital bandage applied after he gave blood to try to help save his family. His children’s blood still covered his shirt,” writes Rosenfeld. “‘They were just feeding chickens when the shell hit,’ he said. ‘I heard a big noise on the roof and I went to find them. They were just meat,’ he gasped, before breaking down in tears,” continued Rosenfeld’s article. We murdered them about two and a half hours after the humanitarian cease-fire ended last Thursday. Two other brothers, Oudeh (16) and Bassel (8) were wounded, Bassel seriously.

The father told Rosenfeld that there was a warning missile. Before the attack, they heard the humming of the UAVs, the kind that “knock on the roof.” So I asked Rosenfeld, “If the missile was one of our merciful ones, those that come along as a warning, was the house bombed afterward?” By chance, I found my answer in a CNN report. The network’s camera managed to catch the explosion that came after the warning: knock, fire, smoke and dust. But it was a different house that was bombed, not the Shuhaibar house. I rechecked with Rosenfeld and others. What killed the three children was not a Palestinian rocket that went astray. It was an Israeli warning missile. And Issam Shuhaibar himself is a Palestinian policeman on the payroll of the Ramallah-based Palestinian Authority.

I’ve also given up on trying to get a direct answer from the Israel Defense Forces. Did you mistakenly warn the wrong home, thus murdering another three children? (Of the 84 that have been killed as of Sunday morning.)

I’m fed up with the failed efforts at competing with the abundance of orchestrated commentaries on Hamas’ goals and actions, from people who write as if they’ve sat down with Mohammed Deif and Ismail Haniyeh, and not just some IDF or Shin Bet security service source. Those who rejected Fatah and Yasser Arafat’s peace proposal for two states have now been given Haniyeh, Hamas and BDS. Those who turned Gaza into an internment and punishment camp for 1.8 million human beings should not be surprised that they tunnel underneath the earth. Those who sow strangling, siege and isolation reap rocket fire. Those who have, for 47 years, indiscriminately crossed the Green Line, expropriating land and constantly harming civilians in raids, shootings and settlements – what right do they have to roll their eyes and speak of Palestinian terror against civilians?

Hamas is cruelly and frighteningly destroying the traditional double standards mentality that Israel is a master at. All of those brilliant intelligence and Shin Bet brains really don’t understand that we ourselves have created the perfect recipe for our very own version of Somalia? You want to prevent escalation? Now is the time: Open up the Gaza Strip, let the people return to the world, the West Bank, and to their families and families in Israel. Let them breathe, and they will find out that life is more beautiful than death.

Amira Hass is the Haaretz correspondent for the Occupied Territories. Born in Jerusalem in 1956, Hass joined Haaretz in 1989, and has been in her current position since 1993. As the correspondent for the territories, she spent three years living in Gaza, which served of the basis for her widely acclaimed book, “Drinking the Sea at Gaza.” She has lived in the West Bank city of Ramallah since 1997. Hass is also the author of two other books, both of which are compilations of her articles.