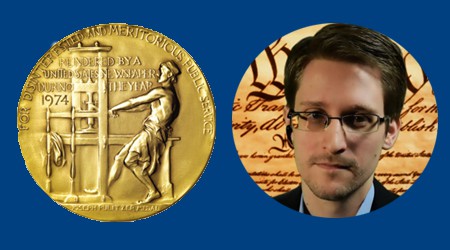 The 19 journalists, academics and writers who make up the Pulitzer Prize committee defied the Obama administration and defenders of the NSA’s secretive surveillance operations around the world by honoring The Guardian US and The Washington Post with the award for public service for the papers’ groundbreaking articles based on the leaks of NSA whistle-blower Edward Snowden.

Truthdig Editor-in-Chief Robert Scheer was thrilled and heartened by the announcement.

“What splendid courage!” he said in a statement. “The Pulitzer Prize committee honored the essence of justice by bestowing its most prestigious award—for public service—to The Guardian and The Washington Post for exposing one of the most important stories concerning civil liberties in the history of journalism. By recognizing the astounding threat posed by the NSA to the basic freedoms our government is sworn to observe, the award effectively honors Edward Snowden and, through his example, other brave whistle-blowers including Daniel Ellsberg, Chelsea Manning, Thomas Drake and Jesselyn Radack, as well as WikiLeaks Publisher and Editor-in-Chief Julian Assange. They all rose to the challenge of saving our freedom from the political charlatans who attack our privacy by choosing the devil of false security over the angel of individual liberty. Raise a glass to the whistle-blowers and the brave journalists, led by Glenn Greenwald and Laura Poitras, who have risked so much to preserve the spirit of our Constitution when others charged with that task, from the president on down, have so clearly betrayed that sacred trust.”

The award comes 10 months after The Guardian published its first investigation into Snowden’s leaks. That article revealed the NSA’s bulk collection of Americans’ telephone records.

Reporters and editors with The Guardian and The Washington Post published “the most substantial disclosures of US government secrets since the Pentagon Papers on the Vietnam War in 1971,” The Guardian wrote in its article announcing the news. Observers concerned with the preservation of civil liberties generally agree. In addition to the agency’s mass dragnet of telephone records, the disclosures included the Prism program that allowed the NSA and its British counterpart, the GCHQ, to gain backdoor entry into the data of giant Internet companies, including Google and Facebook; the cracking of encryption technology, which undermined Web users’ personal security; and the surveillance of phone calls made by 35 world leaders.

In its official wording, the committee praised both newspapers for their “revelation of widespread secret surveillance by the National Security Agency.” It singled out The Washington Post for its “authoritative and insightful reports that helped the public understand how the disclosures fit into the larger framework of national security” and noted The Guardian for “helping through aggressive reporting to spark a debate about the relationship between the government and the public over issues of security and privacy.”

In a statement posted on The Guardian’s website, Snowden said, “Today’s decision is a vindication for everyone who believes that the public has a role in government. We owe it to the efforts of the brave reporters and their colleagues who kept working in the face of extraordinary intimidation, including the forced destruction of journalistic materials, the inappropriate use of terrorism laws, and so many other means of pressure to get them to stop what the world now recognises was work of vital public importance.”

His actions in leaking the documents “would have been meaningless without the dedication, passion, and skill of these newspapers,” he added.

Reporting at The Guardian was led by constitutional and civil rights lawyer-turned-journalist Glenn Greenwald, veteran defense and intelligence correspondent Ewen MacAskill and documentary filmmaker Laura Poitras. Reporting at The Washington Post was led by national security writer Barton Gellman, who co-operated with Poitras. All four journalists were honored with a George Polk journalism award Friday for their work on the NSA story.

On the ongoing significance of the Snowden revelations, The Guardian wrote, “The NSA revelations have reverberated around the world and sparked a debate in the US over the balance between national security and personal privacy. On the back of the disclosures, President Obama ordered a White House review into data surveillance, a number of congressional reform bills have been introduced, and protections have begun to be put in place to safeguard privacy for foreign leaders and to increase scrutiny over the NSA’s mass data collection.”

What exactly the awarding of the highest accolade in U.S. journalism to reporters and editors investigating the NSA means for the struggle over civil liberties will be seen in the days ahead.