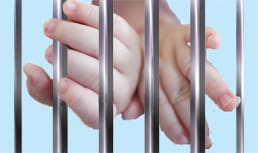 An explosive new report from the Daily Beast’s Betsy Woodruff looks at how the Corrections Corporation of America (CCA), one of America’s two large private prison corporations, has seen its profits explode, thanks to a little-noticed move by the Obama administration.

Woodruff notes that before last summer, there was virtually no “family detention,” referring to the detention of migrant families crossing the border, children included, in U.S. immigrant detention facilities. But as Human Rights Watch’s Antonio Ginatta noted, “now we’re in the thousands.”

It started last summer, when large numbers of families fleeing violence in Central America started crossing over into the United States. The Obama administration opened a facility in Artesia, New Mexico, to detain these families; after controversy, that facility was closed and a new one operated by CCA opened in Dilley, Texas, with a capacity of 2,400 beds.

Woodruff notes that CCA’s quarterly report shows its profits in the second quarter of 2015 were $49 million higher than the same period in 2014, largely due to the expansion in detaining migrant families. The Dilley facility alone generated $36 million in revenue during the quarter.

“In just one year, these investment companies have profited millions off of the illegal detention of children and babies fleeing unthinkable harm in Central America,” Bryan Johnson, an immigration attorney representing many of the immigrants at Dilley, told the Daily Beast. “Because these companies wanted a bigger quarterly dividend, dozens of children, including some of my clients, were denied medical treatment to such a shocking degree that their lives were put at imminent risk of death or serious bodily harm.”

“The only reason I can see that people are still in family detention is because there must be incredible pressures to keep it going on the basis of its profitability,” Laura Lichtenberg, an immigration attorney, told Daily Beast.