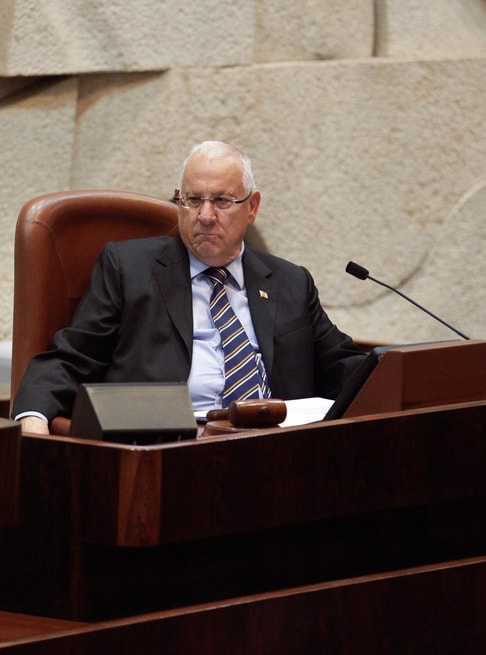 Israeli President Reuven Rivlin on Monday declared Israeli squatting on the Palestinian West Bank a “right” and as an essential Zionist principle.

Reuven, a former chairman of the far-right Likud Party now in power, is known to favor a paternalist form of the one-state solution. He has said he would rather give Palestinians citizenship than give up Israeli squatter settlements in the West Bank. (Although, it must be pointed out, he hasn’t actually done anything practical to end Palestinian statelessness and lack of basic rights in the West Bank, and Israeli squatter settlements there often disadvantage native Palestinians by stealing land, water and other resources without offering compensation). Reuven, who speaks fluent Arabic, has a vision of Israel as a multi-ethnic state, and has championed rights for Palestinian-Israelis, even the right to dissent from Israeli government policy. But he clearly also gets the confidence for this relative generosity to minorities from a conviction that Jews will remain on top of the political and social hierarchy. His supremacism extends to the Orthdox/ Conservative/Reform/Reconstructionist divide in contemporary Judaism. Reuven has been dismissive of Reform and Conservative Judaism, the major denominations in the United States, as not really Jewish, insisting that a fundamentalist approach to law is what makes for the essence of Judaism (in the same way that Muslim fundamentalists see sharia as the essence of Islam. He is not himself terribly observant, though).

Rivlin said, “I love the land of Israel with all my heart. I have never and will never give up on this land. For me, our right to this land is not a matter of political debate. It is a basic fact of modern Zionism . . We must not give anyone the sense that we are in any doubt about our right to our land. For me, the settlement of the land of Israel is an expression of that right, our historical right, our national right.”

Yes, and Mussolini thought he had a historic right to rule Libya, too, andItalians saw themselves as “returning” to North Africa in 1911 and after, since it had been part of the Roman Empire. People who say they love the fatherland with all their heart and that its borders extend beyond the present map should be viewed with suspicion. Such claims to supremacism over other people and their territory are frankly absurd, and doomed to the dustbin of history.

What is worrisome is that past Likud leaders, such as Ariel Sharon, staked out claims to the Ghur Valley in Jordan or to southern Lebanon (or once upon a time, Egypt’s Sinai). Zionist leader David Ben Gurion once boasted that Israel had not fixed its borders.

The question is whether Rivlin’s dream of subjecting the 2.5 million Palestinians in the West Bank to permanent Israeli annexation, and his placing of this project at the center of the Zionist project, heralds a permanent split between Jewish Americans and the Likud government of Israel. Because most American Jews don’t approve of this kind of annexationist project.