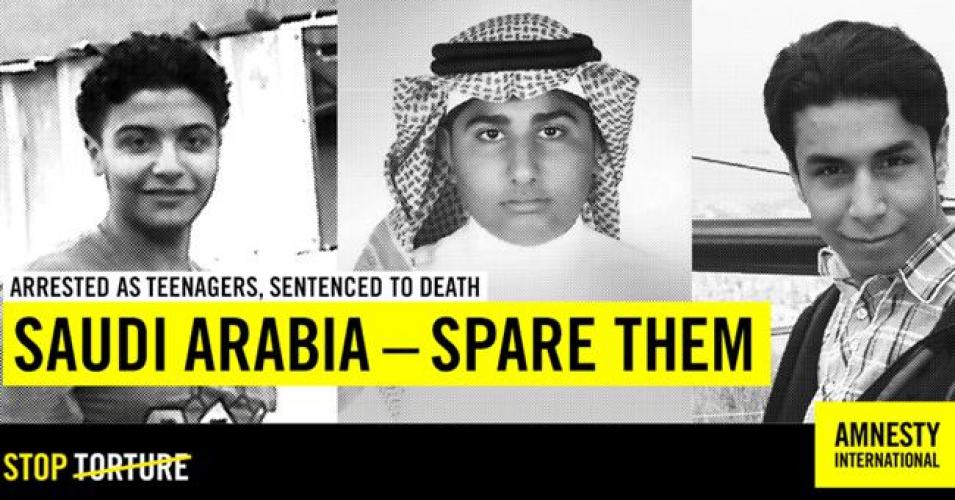 From left to right: Dawood Marhoon, Abdullah al-Zaher and Ali al-Nimr, the three Saudi young activists who are on the verge of execution by the Riyadh government. (Image: Amnesty International)

One concrete outcome that President Obama could pursue on his visit to Saudi Arabia is saving the lives of three Shia youth sentenced to be executed, most likely by beheading, for participating in nonviolent protests. Sparing their lives could also help ease the Shia/Sunni tensions that have engulfed the region.

Ali al-Nimr, Dawood al-Marhoon, and Abdullah al-Zaher are members of the minority Shia community that has, for decades, been demanding equality and full civil rights. The Shia represent 10-15 percent of the Saudi population and live mainly in the oil-rich Eastern province. Ever since the Saudi state was founded in 1932 by forming a pact with the Wahhabi sect of Sunni Islam, the Shia in Saudi Arabia have endured state-sponsored discrimination, social marginalization, and campaigns of violence waged by anti-Shiite hardliners. According to Sarah Leah Whitson, Middle East and North Africa director at Human Rights Watch, “All the Saudi Shia want is for their government to respect their identity and treat them equally. Yet Saudi authorities routinely treat these people with scorn and suspicion.” The persecution of the three youth is deeply sectarian, and reflects the long history of oppression the Shia have faced in Saudi Arabia.

Leaked U.S. diplomatic cables in 2008 reported a campaign to close Shia mosques and prevent Shia celebrations, as well as ongoing arrests of people trying to take part in these celebrations. There is also discrimination in the education system. Shia cannot teach religion in public schools and Shia pupils are told by Sunni teachers that they are infidels. Saudi textbooks traditionally characterize Shiism as a form of heresy worse than Christianity and Judaism. Shia cannot become school principals and there are unofficial restrictions on the number of Shia admitted to universities.

The discovery of oil in the Eastern Province brought the Shia jobs as skilled and semi-skilled workers, but they receive little of the contracting wealth the industry generates and they complain that the region does not get its fair share of the oil revenue. Shia are also discriminated against in government employment, especially in positions that relate to national security, such as the military, police, or the security services. There has been only one Shia minister, appointed by King Abdullah in 2014 as the Minister of State, and only a handful of Shia members have been appointed to the 150-seat Shura Council that advises the king.

The Sunni-Shia divide, and the resulting persecution of Shia, becomes more open and dangerous in times of regional upheaval and heightened tensions with Iran. The 2003 U.S. invasion of Iraq and the subsequent rise of Iranian influence in the region intensified the hostilities. The Saudi government began to view dissent among the Shia as part of an Iranian conspiracy to destabilize the kingdom.

This was the climate during which the 2011 Shia protests took place, inspired by the Arab Spring. The protests began with calls for Shia rights and the release of political prisoners, but in the summer of 2012, after at least 16 people died at the hands of government forces, the demands turned into far-reaching calls for a constitutional government and an end to the monarchy.

Ali, Dawood, and Abdullah were among the hundreds arrested during those protests. Their grossly unfair trials were based on “confessions,” extracted under torture, that they attacked police. Dawood was so badly beaten that he signed a blank piece of paper; his tormentors later filled in the “crime” without even bothering to show it to him.

Saudi Arabia is one of the only countries in the world that executes people arrested as minors. The UN Convention on the Rights of the Child, to which the Saudi government is a party, prohibits capital punishment for individuals who were under 18 at the time of the alleged crime. So do the International Covenant on Civil and Political Rights and the American Convention on Human Rights. While the United States itself still uses the death penalty, in 2005 the Supreme Court ruled that the death penalty for juveniles was cruel and unusual punishment and therefore prohibited by the Constitution.

Aside from the issue of minors, Saudi Arabia is one of the top three executioners worldwide, surpassed only by China and Iran. In 2015, Saudi Arabia broke its own previous records, executing 158 people. This year, if the current rate is maintained, Saudi Arabia will execute about 320 prisoners, almost one a day.

If the Saudi government beheads these young men, it will further ignite sectarian hatred. On January 2, the government executed a prominent Shia cleric, Sheikh Nimr al-Nimr (Ali al-Nimr’s uncle), causing outrage among the Shia community inside the kingdom and abroad. Sheikh al-Nimr preached nonviolence, but was sentenced to death for “inciting sectarian strife” and “calling to overthrow the regime,” among other vague charges. In Iran, an angry mob burned the Saudi Embassy, and the Saudis reacted by cutting off diplomatic relations.

The U.S. Commission on International Religious Freedom said: “Sheikh al-Nimr’s execution blatantly disregards the right to dissent and the right to religious freedom of Shia Muslims in the country and contributes to sectarian discord both within Saudi Arabia and in the region. It is long past due for the government of Saudi Arabia to honor international standards of justice and ensure the religious freedom and equal protection rights of everyone in the Kingdom, including its Shia Muslim citizens.”

In his Atlantic interview with Jeffrey Goldberg, President Obama rightly commented that Saudi Arabia needs to “share” the region with Iran. The same would apply internally: the Saudis need to share the nation with their own Shia minority. Given the uproar following Sheikh al-Nimr’s execution, saving the lives of these young men could ease tensions and show the Saudis that the U.S. government will no longer close its eyes to their grotesque human rights record.

If you want to join the campaign to challenge U.S.-Saudi ties and save the lives of Ali, Dawood, and Abdullah, visit the CODEPINK Saudi Arabia page here.

Medea Benjamin (medea@globalexchange.org), co-founder of Global Exchange andCODEPINK: Women for Peace,and author of a forthcoming book on Saudi Arabia,Kingdom of the Unjust. Her previous books include: Drone Warfare: Killing by Remote Control; Don’t Be Afraid Gringo: A Honduran Woman Speaks from the Heart, and (with Jodie Evans) Stop the Next War Now (Inner Ocean Action Guide). Follow her on Twitter:@medeabenjamin