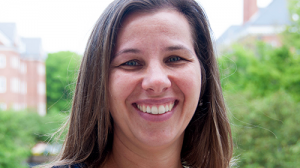 Peggy Young worked for UPS delivering letters and packages. When she became pregnant, her doctor recommended that she avoid lifting more than 20 pounds. She requested a light-duty position so she would not have to lift heavy packages.

Sounds reasonable, right? Not to UPS it didn’t.

Instead, the company denied Peggy’s request and forced her to take unpaid leave, even though the world’s largest shipping and logistics company routinely provides such accommodations to other workers temporarily unable to perform their regular tasks because of on-the-job injuries, disabilities covered by the Americans with Disabilities Act, or loss of their commercial drivers’ licenses.

Pushing Peggy out on unpaid leave was particularly difficult because she needed to prepare for the expenses of having a baby. In addition to losing her salary, she lost her health benefits, which were necessary for her pregnancy-related care.

Today the Supreme Court will hear arguments in the case, Young v. UPS. The question before the court is whether, and in what circumstances, an employer that provides accommodations to some employees with work limitations must provide the same accommodations to pregnant employees who are similar in their ability or inability to work.

We filed a friend of the court brief in support of Peggy Young. We argued that Peggy, like all pregnant workers who need temporary accommodations, is entitled to the same kinds of light-duty assignments employers routinely make available to disabled and injured workers.

This case is critically important because Peggy’s situation is not an isolated case. In fact, it’s pretty typical of pregnant workers who request accommodations and instead are pushed to take unpaid leave. Losing their jobs when they are pregnant can pose significant difficulties, particularly for low-income women. For example, our client Asia Myers, a nursing assistant at a nursing home, was not allowed to come to work after she experienced pregnancy complications and was told not to lift by her doctor. Being out of work made it nearly impossible for her to make ends meet, and she watched the bills pile up.

These incidents have long-term effects on women’s ability to maintain stable careers and achieve equality in the workforce. Half of all workers are women and 75 percent of women will become pregnant during their working lives. Women’s income – before, during, and after pregnancy – is critical to their families’ well-being, and the loss of that income threatens their families’ financial security.

The Pregnancy Discrimination Act was passed to level the playing field and ensure that pregnant women can remain productive members of the workforce. We are hopeful that the Supreme Court will clarify that this law requires employers to provide the same accommodations to pregnant women that they provide to other injured [SIC] workers.

Lenora M. Lapidus is the director of the ACLU Women’s Rights Project.