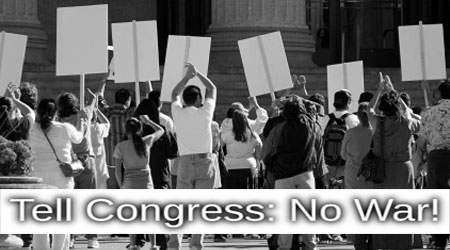 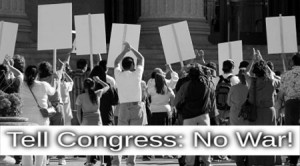 Help us deliver the message of hundreds of local residents to Rep. Eshoo: Vote NO on the use of force!
Bring signs. Some signs and materials will be provided. And be sure to SIGN THE PETITION below!

Urgent Action Alert: Tell Congress to Vote NO on Authorization for Military Force

Please sign this urgent petition to Congress by filling out the form at the end of the petition. Signatures will be presented to our local Representatives well before Congress votes.

A printable version of this petition can be found here. Please circulate it at your office, around your neighborhood, at church … wherever people gather. Return it to PPJC as soon as possible by mail, drop-off at our office, or email a pdf to ppjc@peaceandjustice.org

Petition to Congress: Vote NO on Authorization for Military Force

We urge you to vote no on the President’s request to use military force to respond to apparent chemical weapons attacks in Syria.  We believe that any such unilateral US attack would be illegal, immoral and dangerous.  We urge you to consider the following points:

While we agree that a violation of the Convention on Chemical Weapons is serious and requires a response, the proper response must be based on the rule of law and international in nature, made through existing international institutions and forums, not by the military actions of a single country.

If the evidence does prove that the Syrian government ordered the use of chemical weapons, then officials of that government should be referred to the International Criminal Court and/or the United Nations to face charges of war crimes.

There is a high probability that innocent civilians or low-ranking members of the Syrian army will be the only ones whose lives will be at risk by the proposed attack — that is morally unjustifiable.  There is also a high probability that the repercussions that will inevitably follow a US attack will lead to a widening of the violence and the likelihood that the US will be drawn further into another nation’s civil war.

Our country has been at war for twelve years now and we are still at war.  We say enough.  Stop the endless resort to military strength and seek to strengthen the people of this country instead.