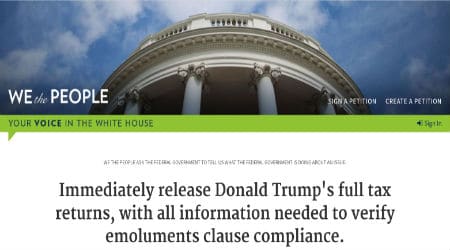 You can sign the petition by clicking here. Image: Screenshot from WhiteHouse.gov

A petition on the White House website demanding that President Donald Trump release his tax returns has garnered over 380,000 signatures in a matter of days, breaking the all-time record for signatures on the site. [Update: Signatures gathered now exceed 400,000.]

“The unprecedented economic conflicts of this administration need to be visible to the American people, including any pertinent documentation which can reveal the foreign influences and financial interests which may put Donald Trump in conflict with the emoluments clause of the Constitution,” the petition states.

The petition went live on January 20, the day of Trump’s inauguration. It was the first petition posted to the site during Trump’s presidency.

“Trump shattered decades of precedent during the 2016 campaign by refusing to release his personal tax returns,” The Hill notes. “At a news conference earlier this month, the president said that he had no intention of ever doing so, and argued that journalists were the only ones that wanted him to release the documents.”

Top Trump aide Kellyanne Conway reaffirmed that Trump is “not going to release his tax returns” on Sunday, despite the hundreds of thousands of signatures on the petition demanding that he do so and a poll earlier this month that found 74 percent of Americans agree.

Meanwhile, since the popularity of that initial petition, people have reported a rising number of mysterious glitches with the White House petition site—including the fact that two petitions demanding that Trump preserve the National Endowment of the Arts and the National Endowment for the Humanities are not registering new signatures. (Last week, Trump released a budget plan that would gut both agencies.)

President Barack Obama created the White House petitions website in 2011. Prior to the petition about Trump’s taxes, the most popular one demanded that the federal government classify the Westboro Baptist Church as a hate group.