Pete Seeger and the NSA

I am not going to answer any questions as to my association, my philosophical beliefs, or how I voted in any election, or any of these private affairs. I think these are very improper questions for any American to be asked, especially under such compulsion as this. 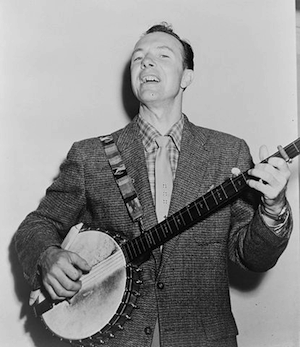 The world lost a clear, strong voice for peace, justice, and community with the death of singer and activist Pete Seeger last week. While Seeger was known as an outspoken musician not shy about airing his political opinions, it’s also important to remember he was once persecuted for those opinions, despite breaking no law. And the telling of this story should give pause to those who claim to be unconcerned about the government’s metadata seizure and search programs that reveal our associations to the government today.

In 1955, Seeger was called before the House Un-American Activities Committee, where he defiantly refused to answer questions about others who he associated with and who shared his political beliefs and associations, believing Congress was violating his First Amendment rights. He was especially concerned about revealing his associations:

I will be glad to tell what songs I have ever sung, because singing is my business. . . .  But I decline to say who has ever listened to them, who has written them, or other people who have sung them.

But if the same thing were to happen today, a Congressional subpoena and a public hearing wouldn’t be necessary for the government to learn all of our associations and other “private affairs.” Since the NSA has been collecting and keeping them, they could just get that same information from their own storehouses of our records.

According to the Constitution, the government is supposed to meet a high standard before collecting this private information about our associations, especially the political ones that the Congressmen were demanding of Seeger. For instance, under the First Amendment, it must“serve compelling state interests, unrelated to the suppression of ideas, that cannot be achieved through means significantly less restrictive of associational freedoms.”

It doesn’t matter whether the government wants associations to look for possibly “illegal” activities of civil rights activists, Communist sympathizers, anarchists, trade unionists, war resisters, gun rights activists, environmental activists, drug legalization advocates, or wants to go after legitimate criminals and potential terrorists, if the government can’t justify the collection of this “metadata” on this “strict scrutiny” standard, they’re not allowed to collect any of it. Yet right now, they collect all of it.

We’re still learning of all the ways the government is able to track our associations without anything like the due process and standards required by the First and Fourth Amendments, but it is the centerpiece of the NSA’s mass telephone records collection program under Patriot Act section 215, which EFF is fighting with our First Unitarian Church v. NSA case that focuses on the right of association.  Our lead client, the First Unitarian Church of Los Angeles, had its own role in resisting the House Un-American Activities Committee. It’s also part and parcel of the mass collection of content and metadata of people all around the world under section 702 of the FISA Amendments Act. And it’s a real concern even if the companies hold the data, as we’ve seen with the FBI’s self-certified National Security Letters and the Hemisphere program, where AT&T employees are embedded in government investigations so that they can more readily search through our phone records for the FBI, the DEA and others.

Each of these programs effectively allows the government to do to you what Pete Seeger refused to let them do to him—track your associations, beliefs and other private affairs without proper legal protections.  And they can do this at scale that was unimaginable in 1955, thanks to the digital nature of our communications, the digital tools that allow them to search automatically rather than by hand and the fact that so much more about these private affairs is in the hands of third parties like our phone and internet companies.

While Seeger escaped jail, he was convicted of contempt for his failure to answer these questions. Thankfully Joseph McCarthy and the Un-American Activities Committees were later widely condemned, and Americans understandably look back sadly and with embarrassment on time when the Committee forced Americans to reveal their own associations, along with the associations and beliefs of others.  With the passing of moral and artistic heroes like Seeger, we should redouble our efforts to make sure that our “private affairs” remain safe and the government’s ability to access them remains subject to careful controls.

Join us on February 11 for the day we fight back against mass surveillance.

Cindy Cohn is legal director for the Electronic Frontier Foundation (EFF), as well as its general counsel, coordinating over 40 national class action lawsuits against the telecommunications carriers and the government seeking to stop warrantless NSA surveillance