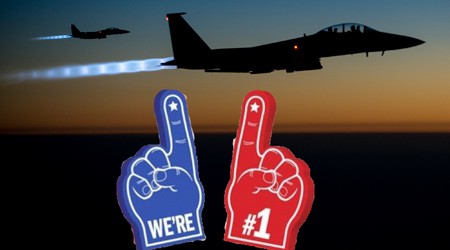 “America, our endless blessings bestow an enduring burden.  But as Americans, we welcome our responsibility to lead.” ~President Barack Obama, 9/10/14

“American exceptionalism is the theory that the United States is qualitatively different from other nation states.” ~Wikipedia

When President Obama announced his intention to deploy US fighter aircraft against the so-called Islamic State in Syria and Iraq, he repeatedly referred to “American leadership.” Because of this “leadership,” the United States is once again bombing foreign countries and entities that have neither attacked the US nor have the credible capacity to do so. After spending most of his first term trying to disentangle the US from the Middle East — a laudable goal — Obama has now embarked on another preemptive American  war. Not surprisingly, Obama noted that this latest American war will take many years, extending far into the foreseeable future America’s now 13-year-old “war on terror.”

In this talk, Paul George will try to untangle the many lines of contradictory national interests of the countries that are involved in the war on ISIS, and explore the background of ISIS and the threat it may or not present to Americans. He will investigate the possible strategic and economic interests that keep leading the US back to military involvement in the the oil-rich Middle East and examine the possible future direction of the war, including the possibility of escalation into a full-blown ground war.

But most importantly, George will dissect the concept of American exceptionalism and how its constant invocation by the political class has led us and continues to lead us to an Orwellian state of perpetual.war and what that means for the future of our country.

Paul George has been the Executive Director of Peninsula Peace and Justice Center since 1990 and has been a grassroots peace and human rights organizer and activist for over 45 years. He is frequently invited to speak on a number of peace and justice issues.

RSVP for this event (not required, but appreciated for planning purposes)