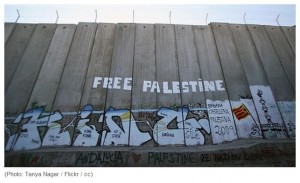 New negotiations between Israelis and Palestinians may begin next week, with much talk of a “new chapter” in the seemingly intractable conflict. A new chapter, perhaps, but who is writing the book?

Any public discussion about the “peace process” is tense, in part because there is no widely shared understanding of the history and politics of — even an appropriate terminology for — the conflict. That’s as true in the United States as in Palestine and Israel.

I never gave much thought to the question until I was 30 years old, in the late 1980s. Before that, I had a typical view of the conflict for an apolitical American: It was confusing, and everyone involved seemed a bit crazy. With no understanding of the history of the region and no framework for analyzing U.S. policy in the Middle East, it was all a muddle, and so I ignored it. That’s one of the privileges of being in the comfortable classes in the United States — you can remain comfortably ignorant.

But as a frustrated journalist with a newfound freedom to examine the politics of news media in graduate school, I began studying law and human rights, in the domestic and international arenas. I also started digging into the issues I had been avoiding. In the case of Palestine/Israel, I began reading about the roots of the conflict, how the United States was involved, and how U.S. journalists were presenting the issues.

I came to this inquiry with no firm allegiance to either side. As a white U.S. citizen from a centrist Protestant background but with no religious commitments, I felt no cultural or spiritual connection to either national group. I don’t speak Hebrew or Arabic, and I had never traveled to the Middle East. I had no personal relationships that predisposed me to favor one group over the other. Like any human, I was not free of bias, of course. As a relatively unreflective white man rooted in a predominantly Christian culture, I was raised with some level of anti-Semitism and anti-Arab racism, for example, and no doubt that affected my perceptions. But based solely on my personal profile, I didn’t have a dog in that fight, or so I thought.

After a couple of years of studying the issues, I realized that the categories of “pro-Israeli” and “pro-Palestinian” didn’t fit me. When people asked me where I stood on the issue, I would say that I supported international law and the Universal Declaration of Human Rights. As a U.S. citizen, I asserted that my primarily obligation was to evaluate the legality and morality of my own country’s involvement in the conflict and the region.

The more I learned about all those things, the more I became opposed to my government’s policy on this issue, in the Middle East, and around the world. The more I learned, the more I realized I lived in the imperial power of the day, and it became clear to me that imperial policies are designed to enrich the few while ignoring the needs of the many, at home and abroad. I became a critic of U.S. policy based on careful study that included, but was not limited to, mainstream sources. I could no longer accept the conventional story and the policies that flowed from that story.

Today, the situation in Palestine and Israel is as grim as ever. Decades of Israeli expansion and the Palestinian leadership’s failure to build a vibrant movement to challenge that expansion (or, perhaps, to let such a movement emerge on its own) have narrowed the prospects for a just peace. And in the background lurks the United States, still the major impediment to progress as long as it offers Israel nearly unconditional support for the occupation.

More than ever, the case for international law and human rights needs to be made clearly, but the conditions for that dialogue deteriorate. Despite recent efforts by U.S. Secretary of State John Kerry, there seems little basis for optimism, short or long term. As U.S. officials scramble to save an empire in decline, with its whole Middle East policy in disarray, it’s difficult to imagine a breakthrough.

I have no great insights into how to solve the conflict or deepen the dialogue. But as I think about the conflict, I’m drawn back to my roots in feminist intellectual and political life for some basic observations.

My return to graduate school has led me to inquire about many aspects of the world over the past two decades, but the first of those inquiries was into gender, with a focus on men’s violence against women. That led me to radical feminist theory, which has helped me understand not only the question of gender but offered a framework for understanding hierarchy. Feminism taught me how to think not only about gender but also about power, and a central lesson of feminism that applies here is the problem of assuming false equivalency in analyzing conflict.

Take a classic example of a husband who physically assaults his wife. The problem is rooted in patriarchy, a system that gives men control over women in a hierarchy that is naturalized and normalized: Men rule, women submit. The man’s violence in this case is used to ensure the submission, but the physical violence typically is only one method of control; such relationships often include emotional abuse and sexual violence. Within that dynamic, the woman may engage in all kinds of dysfunctional behavior herself, and she may strike out violently against the man at times. But feminist analyses of male power and men’s violence have made two things clear.

First, any specific incident can’t be understood outside the larger context, not only of that relationship but of the power dynamics of the culture. So, if we were drawn into a chaotic incident in the couple’s home, we might be tempted to assess the situation on the basis of what had just happened, but focusing only on the immediate occurrence would leave us ill-equipped to understand it. We need to know the couple’s history and understand the patriarchal context in which that history plays out.

Second, if we wanted to help resolve the conflict, it would be folly to assume that the man and woman were equally responsible and that a productive dialogue could go forward on that basis. Any claim that the man and woman should sit down as equals and talk would favor the man; without an acknowledgement of his greater power and a history of using that power to dominate, any “dialogue” would be a farce. While some men react to any call for such conversation with force, other men pursue a more sophisticated strategy that continues the dialogue so long as his fundamental power, in the relationship or in society, is not challenged. Some men pursue both strategies, depending on the moment. Real dialogue is possible only when the discrepancy in power is addressed.

If there is to be progress toward a just and peaceful solution in Palestine/Israel, those two lessons are crucial. We must recognize the larger political context in which the conflict is set and not assume there’s a level playing field for dialogue. That means acknowledging that since the end of World War II, the United States has pursued a policy of domination — through diplomacy and force — in the Middle East, and that for more than four decades a central component of that policy has been U.S. support for Israel’s expansionist policies in exchange for Israeli support of the U.S. project in the region (though not without disagreements and tension between the two countries). It also means that discussions about the issue, whether among citizens or by officials at the negotiating table, must begin with an acknowledgement of the power wielded by Israel, backed by the United States.

For more than 20 years I have tried to recognize the many ways in which I live with unearned privilege and tried to support the struggles of marginalized and oppressed people to justice. That has led me to support the basic aims of Palestinian nationalism, even if I do not always support specific strategies or tactics of various Palestinian groups. I also have criticized Israeli policy in public, in writing, and on film. But as a citizen of the United States, I have tried always to bring discussions on my home turf back to the responsibility of citizens to hold their own government accountable.

That is my dog in the fight. I live in a nation in which there is a tremendous gap between leaders’ rhetoric of freedom and justice, and the reality of imperial policies that perpetuate injustice. To close that gap, our public discussions must take account of the context and be honest about power. Nowhere is that more crucial than the intellectual and political engagements on the Palestine/Israel conflict.

Robert Jensen is a journalism professor at the University of Texas at Austin and board member of the Third Coast Activist Resource Center in Austin. He is the author of Arguing for Our Lives: A User’s Guide to Constructive Dialogue (City Lights, 2013); All My Bones Shake: Seeking a Progressive Path to the Prophetic Voice, (Soft Skull Press, 2009);Getting Off: Pornography and the End of Masculinity;  The Heart of Whiteness: Race, Racism, and White Privilege; Citizens of the Empire: The Struggle to Claim Our Humanity; and Writing Dissent: Taking Radical Ideas from the Margins to the Mainstream (Peter Lang). Jensen is also co-producer of the documentary film “Abe Osheroff: One Foot in the Grave, the Other Still Dancing” (Media Education Foundation, 2009), which chronicles the life and philosophy of the longtime radical activist.  An extended interview Jensen conducted with Osheroff is available here.

He can be reached at rjensen@uts.cc.utexas.edu and his articles can be found onlinehere.