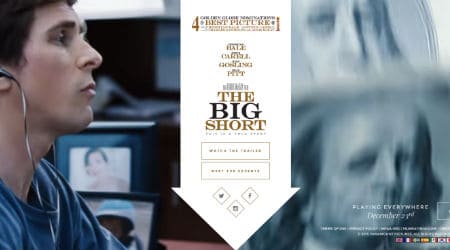 Paul Krugman has not quite become a film critic, but he does give “The Big Short,” the new movie about the financial crisis of 2008, a thumbs up in Friday’s column. His over-arching point is that some powerful interests want to spin the history of the crisis into something it was not, namely a problem of too much government regulation, when in fact the opposite is the case. And they are doing their best to make sure that “we don’t remember what happened, or that we remember it wrong.”

That brings Krugman to the “new movie the enemies of financial regulation really, really don’t want you to see:”

“The Big Short” is based on the Michael Lewis book of the same name, one of the few real best-sellers to emerge from the financial crisis. I saw an early screening, and I think it does a terrific job of making Wall Street skulduggery entertaining, of exploiting the inherent black humor of how it went down.

The film achieves this feat mainly by personalizing the tale, focusing not on abstractions but on colorful individuals who saw the rot in the system and tried to make money off that realization. Of course, this still requires explaining what it was all about. Yet even the necessary expository set pieces work amazingly well. For example, we learn how dubious loans were repackaged into supposedly safe “collateralized debt obligations” via a segment in which the chef Anthony Bourdain explains how last week’s fish can be disguised as seafood stew.

Krugman does not go too far down the path of film critic; his message is that the movie gets the basic underlying story right:

I could quibble over a few points: The group of people who recognized that we were experiencing the mother of all housing bubbles, and that this posed big dangers to the real economy, was bigger than the film might lead you to believe. It even included a few (cough) mainstream economists. But it is true that many influential, seemingly authoritative players, from Alan Greenspan on down, insisted not only that there was no bubble but that no bubble was even possible.

And the bubble whose existence they denied really was inflated largely via opaque financial schemes that in many cases amounted to outright fraud — and it is an outrage that basically nobody ended up being punished for those sins aside from innocent bystanders, namely the millions of workers who lost their jobs and the millions of families that lost their homes.

The story is not one that the rich and powerful want disseminated, and they are doing everything in their power to spread the Big Lie that too much government was to blame because it pushed too many loans on the poor. This despite that view being thoroughly debunked, according to Krugman.

Murdoch-owned papers are going after the movie big-time, but their agenda is obvious.”The attackers obviously worry that the film is entertaining enough that it will expose a large audience to the truth,”  Krugman writes. “Let’s hope that their fears are justified.”