One American Who Isn’t for Sale

Our data is their commerce. Ninety-eight percent of the NSA contractor’s revenue of $5.8 billion last year came from the taxpayers, who are the same folks being spied upon. 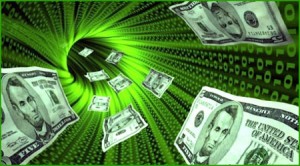 So it’s true, as filmmaker Michael Moore once warned us, the Carlyle Group is Big Brother. That’s the $176 billion private equity firm that once employed former President George H.W. Bush, his Secretary of State James A. Baker III and a host of political luminaries that would put any other list of America’s ruling elite to shame. Plenty of Democrats too, including former President Bill Clinton’s Chief of Staff Mack McLarty and Arthur Levitt, the man Clinton appointed to head the SEC during the creation of the housing bust.

It is also the firm that owns Booz Allen Hamilton Inc., which, thanks to the revelations of one of its employees, whistle-blower Edward Snowden, we now know collects and stores much of the government’s immense PRISM database spying on the lives of this nation’s citizenry. This is systematic snooping through the telephone and Internet records of hundreds of millions of Americans conducted by Snowden and others in Booz Allen’s employ who had the highest access to our most private personal data while working at a for-profit company.

Our data is their commerce, and ever since 9/11, observing us has become mega lucrative. “Booz Allen Hamilton,” The New York Times reported Sunday, “has become one of the largest and most profitable corporations in the United States almost exclusively by serving a single client: the government of the United States.” The word “serving” might be pushing it here, since 98 percent of the firm’s revenue of $5.8 billion last year came from the taxpayers, who are the same folks being spied upon.

Heck, Booz Allen knows all about those taxpayers, since back in 1998, during the Clinton presidency, the firm was hired to “modernize” the IRS. “We made some very dramatic changes in the way the IRS is organized,” Booz Allen’s CEO claimed at the time. How perfect: Make tax collection more efficient and less painful, so the suckers might not notice when you scoop up the loot at the other end.

Of course, to those swinging through the revolving door between the government and its defense contractors, it must be difficult to draw a distinction between their changing roles. James R. Clapper, the chief intelligence official in the Obama administration, who is now investigating this security lapse, was himself a top Booz Allen executive. And it should be of little surprise that John M. McConnell, currently vice chairman of Booz Allen, was previously the chief intelligence official in the George W. Bush administration. It’s crony capitalism at its patriotic best.

“The national security apparatus has been more and more privatized and turned over to contractors,” Danielle Brian, executive director of the nonprofit Project on Government Oversight, told the Times. “This is something the public is largely unaware of, how more than a million private contractors are cleared to handle highly sensitive matters.”

Brian points out that the for-profit folks spying on us also get to grant high level government security clearances. Those private sector employees are then entrusted to work in the most secretive sectors of the government’s national security apparatus, including at the National Security Agency. It’s good work if you can get it. In January, the Defense Department granted Booz Allen a five-year, $5.6 billion deal assigning its private sector employees in key positions to advise Pentagon personnel on crafting military policy. Maybe they can find some new conventional wars to fight just in case the one against terrorism loses its profitability.

That could happen now that the American public has been alerted to the fact that in the grand design of that war, it is the ordinary American citizen, even when shopping on the Internet, who gets to play enemy. That reality is what seems to have turned Snowden, like others before him, into a courageous whistle-blower. He signed up for training with the Army Special Forces to go fight in Iraq because he bought the Bush administration’s line that it was a war “to help free people from oppression.” That misplaced idealism collided with the observation that “Most of the people training us seemed pumped up about killing Arabs, not helping anyone,” Snowden told the British newspaper The Guardian.

Still, he continued to serve the government, both with the CIA and then at the NSA, where he worked as a Booz Allen contractor. There he witnessed a part of the sordid story that he chose to share with his fellow Americans. As he explained to The Guardian:

“The NSA has built an infrastructure that allows it to intercept almost everything. … If I wanted to see your emails or your wife’s phone, all I have to do is use intercepts. I can get your emails, passwords, phone records, credit cards. I don’t want to live in a society that does these sort of things. … I do not want to live in a world where everything I do and say is recorded.”

The folks at Booz Allen, and its parent company the Carlyle Group, love that world as a fabulous profit center, and it is truly inspiring that there are still folks like Snowden whom they can’t buy.